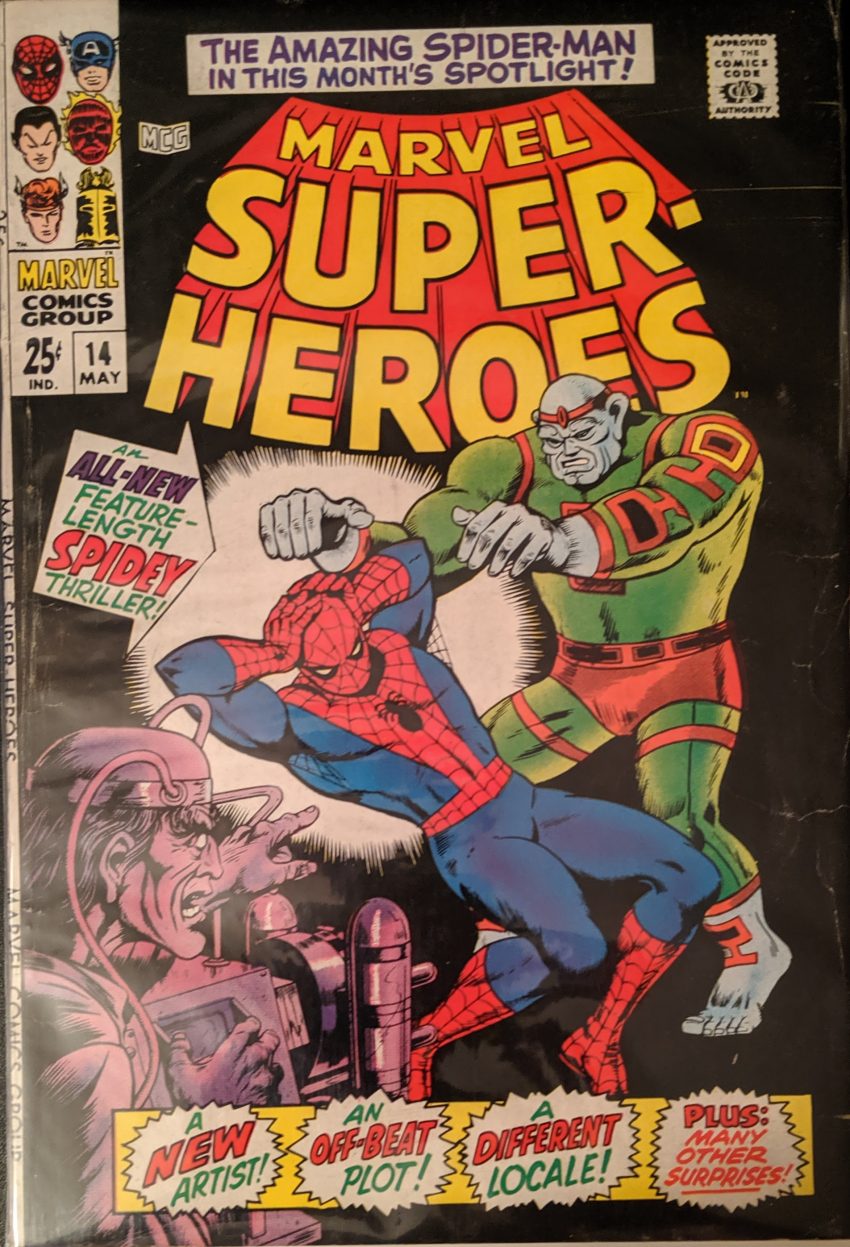 Marvel Superheroes? What is this? I barely know. From what I gather, this was mostly a reprint book, but sometimes, it had original content in it, and this month, that original content features our guy Spidey. And… it looks weird. Who’s the new artist?

That’s right, it’s the Spidey debut of future mainstay Ross Andru. But look who’s inking. Bill Everett created Namor, the Sub-Mariner in Marvel Comics #1, helping to lay the groundwork for all that came after. He also co-created Daredevil during the Marvel Age. But, he also had a complicated life, and struggled a lot with substance abuse. To his credit, Stan Lee was always eager to offer Bill work all through his career when he was able to do it. And here he is. In an otherwise unassuming “middle class home in a middle class neighborhood,” a guy in a roomful of religious paraphernalia from all sorts of religions says it’s time for him to attempt the strangest crime of all time. To prove his power, he’s decided to kill Spider-Man!

Ross Andur’s weird insistence on drawing Spidey’s web looking more like a bag started at the beginning, I see. Not much else here is terribly recognizable compared to his later style. But the rings going out into the other panels is a pretty cool gag. Spidey falls down among the goons he was going to nab, and has to fight them through his mystery illness. He manages to web some of their guns to the ceiling.

The goons run for it, not knowing that that was about all Spidey had left. Lucky for him, they run right into the cops outside, drawn to the building by the skylight breaking. That worked out. Back in his modest middle class home, our mystery villain is pretty happy with his results, and says it’s time to move on to the next phase.

Ooooohkaaaaay. So, using his “psycho intensifier,” this guy can do all sorts of mental stuff. Next he picks up a Spider-Man voodoo doll and pokes it in the head, giving Peter Parker a terrible headache as he tries to sneak into his room without Harry noticing. Then The Sorcerer… mails his voodoo doll to the police? He wants people to know he’s the one who beat Spider-Man, and this is his method. Sure, why not?

Is the shower in Peter’s bedroom? Like, not even in a bathroom, just in the bedroom? That is a weird, weird panel. As Harry and the girls leave, The Sorcerer uses his powers to physically control Peter, making him get dressed pack a bag, jump in a cab in full view of Harry, and drive to the airport, where he books a flight to New Orleans! This guy is really ruining Pete’s finances! When he gets there, he takes a taxi to a hotel and checks in, all under someone else’s power. It’s Mardi Gras, of course.

Now there’s a coloring mistake! Also: the famous New Orleans Warehouse. The only one they had back then! Inside, Spidey’s danger sense is going crazy, and then the big weirdo on the cover smashes out of a big crate.

Spidey and the whatever tussle for awhile, Spidey learning it’s got some kind of beam weapon in its forehead in addition to being stretchy and strong. Eventually the robot throws Spider-Man out into the street, where some revelers think it’s a gag, and others aren’t so sure. Then, as things are looking grim for our hero…

What a random comic. I guess that’s what you get when your comic is intended to fill time while the main artist is injured, but… weird. You’ll be shocked to know The Sorcerer and his Synthetic Man never appeared in any other comics. I guess he died there? So weird. The rest of the book is 1940s reprints, featuring Namor, The Human Torch, Mercury, Black Knight and Captain America. Nothing I’ve ever seen before, so pretty cool for me, but not relevant to the blog.