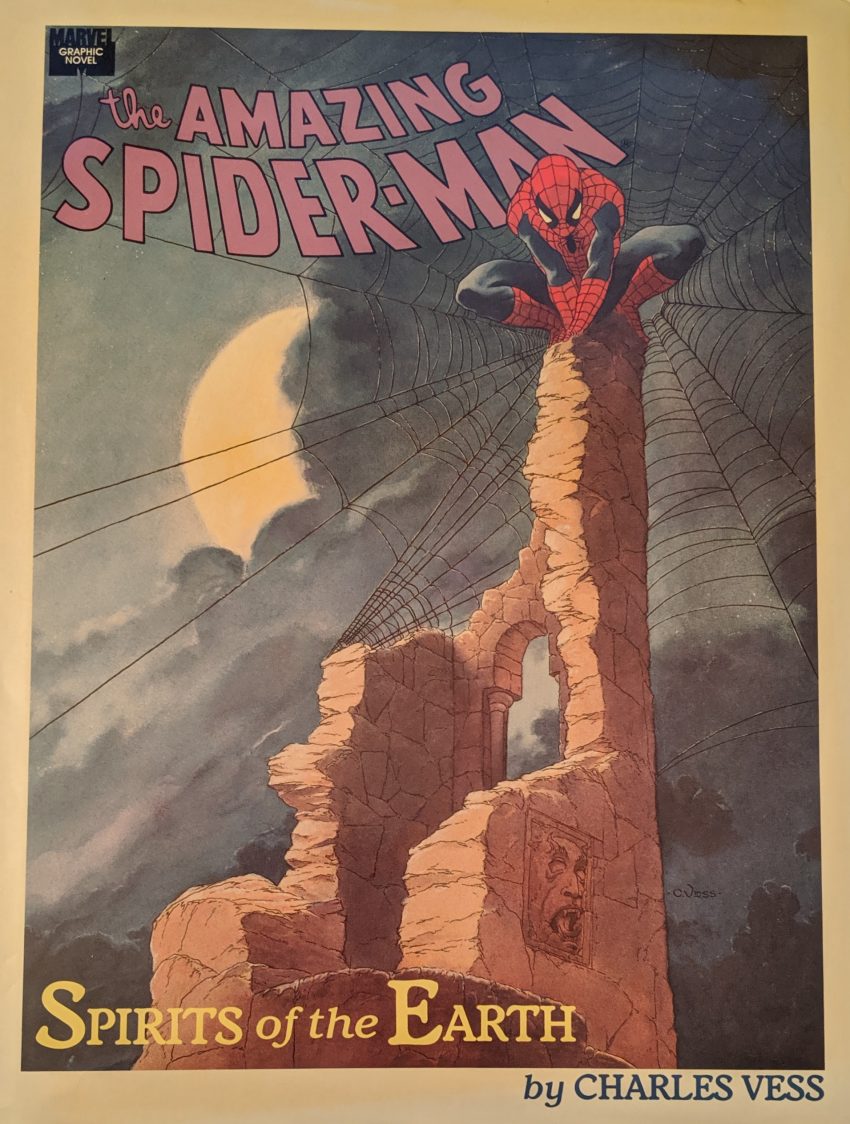 I’ve gushed about Charles Vess elsewhere on the blog for his ethereal painted covers, and now we get an entire graphic novel written & painted by Vess. The back cover says he worked on it over two years! This, I think, was a Christmas gift when I was a lad. The first hardcover comic book I’d ever seen, and maybe one of the first, period. It felt very special and fancy, and I guess that’s because it was. I read it a million times. And in 2019, I got the man himself to sign it (And Web 1 and ASM 277), while letting him know how much it meant to me. Fun times.

But now, let’s get into this highly unusual Spider-Man adventure.

I mean, come on. Simply gorgeous. Spidey is amped, thinking the city is magic tonight. But that doesn’t stop bad guys from doing their thing, so soon he’s descending on a couple of purse snatchers in an alley after seeing them in the act. He dispatches one guy and leaps on the back of the other, who tries his luck with a gun.

Good delivered, Peter makes his way to a dinner date with Aunt May, saying the rain’s made the city sparkle like the castles in fairy tales she told him as a kid. Then he lets her know he & Mary Jane are about to take a sort of second honeymoon to Scotland. A heretofore unheard of relative, a Mrs. MacLeod, has died, and left MJ her property in Scotland.

Pete & MJ  make their way to the place they’ll be staying, and the proprietor says they’ve been expecting MJ for some time. They get settled in, and the next day, go out to see the place MJ apparently owns now. Vess does some work to make it seem like this woman was a big part of Mary Jane’s life, with her going through old photos and finding a photo of Mary MacLeod at her christening and talking about how the letters they exchanged over the years made her feel very close. Then they go hang out in the pub in their inn for the evening. A tuff lookin’ guy sees Mary Jane and invites her to join his game of pool, but she’s an old pro, so she goes in to shark him and his buddies. Meanwhile, Peter sits at the bar with some old fellas discussing some spooky happenings up by the old castle, who say it was faeries. Peter looks pretty amused by that, and they ask him if they have ghosts or faeries in the US.

Well! Intrigue! The big mook who was after MJ earlier, Angus, turns out to be the Lord’s nephew, telling him to calm down, but the Lord refuses. Peter is starting to get some tingles as the Lord demands to speak his piece, and then a mysterious woman appears, declaring that faeries had nothing to do with the missing child.

After that, Pete & MJ retire to their room, but Peter can’t sleep. He gets into his Spidey gear and decides to go check out the castle. He hopes he hasn’t disturbed MJ, but she knows he’s going, thinking at him not to let the wee ghosties get him.

Every page of this book is a work of art, my goodness. Spidey finds the fire folks were talking about didn’t actually do much damage. There’s some holes in the roof, one of which he drops down into, but otherwise, things look pretty good. He finds a big family portrait.

The big beardy ghost walks through the air up to Spidey, and silently begins swinging his sword at him. As Spider-Man dodges around, the ghost grows until it’s bigger than the castle, and then lets out a howl that actually destroys some of a spire, forcing Spidey to dive to a nearby rampart for safety, hurting his shoulder in the process. And then all the ghosts are gone. Our freaked out hero decides it’s a good time to pack it in for the night.

…lives on an island in the middle of the loch, which you can walk to at low tide. MJ is really unflappable in this. Peter goes to see Mairi, and as he approaches, she looks almost like Mary Jane. But as the sun passed behind a cloud, she’s an old woman again, ready to tell Peter the faeries are long gone, and she tends their abandoned mounds. He tells her he saw things up at the castle, but she’s adamant.

In spite of moonlighting in comics on and off, Vess is primarily known as a fantasy illustrator. As if you needed to be told that with pages like this.

Strange choice of attire for the meeting, Pete, but ok! The guy running the meeting gives an impassioned speech against letting go of their land, but Sir Hugh just leaves, telling MJ perhaps one day, she’ll understand. She is pretty shocked by his behavior, while Spider-Man thinks he better see what’s up with Angus tonight. But as everyone files outside, ghostly, monstrous women on horseback appear in the sky. But they disappear in a flash of light, and all they really do is draw the attention of the assembled crowd to a red & blue figure on the roof, which makes them start yelling about demons.

But, as Spidey tries to escape, he finds he’s hidden above a herd of cows, which he spooks, and everyone’s soon after him again. He winds up stuck in a tree near the church the meeting was in when Mairi shows up, telling MJ not to worry as she takes the crowd’s attention.

Peter feels an innate trust in Mairi, and MJ says she does, too, so he’s willing to leave her with the mysterious woman as he heads inside. Mairi says she has need of MJ’s youth and energy to help bring him back to them, and MJ says she’ll do whatever she can. As Spidey heads back into the castle, he thinks the loud hum of electricity he noted last time probably has something to do with the ghosts. Then he happens upon the big guy from last night, noting this doesn’t even set off his Spider Sense, and lets it charge harmlessly through him. Then he follows the sound of the generator down into the dungeons, and below them…

It may not be faeries, but it’s still a lot crazier than he seems to be giving it credit for. He drops into the water to sneak into the big crazy crystal facility, and his splash is heard by guards wearing the distinctive uniform of The Hellfire Club, longtime X-Men foes. Ah ha!

Spidey spots the control center, right beneath the enormous crystal and seeming to have a channel of energy going to it. Some science type goons talk about their satellite over the site being locked in position. One of them is worried because they’ve not tested the laser before, but another cuts him off.

It’s fightin’ time, as Spidey easily subdues a bunch of Hellfire goons. But then the scientists crank up their laser, and the noise is so loud it makes Spider-Man pass out. He wakes up in some kind of energy prison, with a now badly wounded Sir Hugh as his cellmate. Hugh really messed up his hand trying the energy field, and says it’s hopeless. He says the banshee will come for them both.

Sweet, sweet exposition. Angus goes on to say that, awhile ago when he was missing and presumed dead, he’d discovered this cavern and its gigantic crystal, and realized the power it represented. He took a piece to the US, to the current seat of The Hellfire Club, hoping to barter his way into their ranks. They told him if he could harness the crystal for them, he’d have a place in their circle. So he’s kidnapped the young boy and set everything in motion, and now he has the kid brought up to watch his uncle get executed.

Well, that’s no good. But, up on the surface, Mairi and MJ are holding hands, and we’re told MJ’s youthful energy flows into Mairi as she sings a wailing song that stirs the ancients. Down in the cavern, a big chunk of rock dislodges and smashes part of the apparatus around the crystal. Soon, it’s a full scale cave-in, rocks tumbling down on the crystal and the Hellfire compound. The energy field trapping Spidey & Hugh fails, and he’s able to escape, but Hugh is just deliriously ranting about the banshee now.

What motivates Spider-Man better than guilt, after all? A new mob of goons comes for him, but Angus is escaping with the kid, so he just vaults over them and keeps running. But as Angus reaches a tunnel to the surface, yet another mob of goons swarms in between him and Spidey, so he’s gotta do his thing.

The roof collapses, and Spider-Man is the only one able to survive. He’s probably got a broken arm and his side is messed up, but he’s alive, so he keeps on after Angus, bemoaning how horrible this has all gone.

Spidey climbs up, but he’s messed up and Angus has the high ground, so he starts booting Spidey in the head. Soon he’s trying to choke the life out of the hero, asking him what he has to say for himself.

Of course, our guy is very powerful and Angus is just a dude, so badly wounded or not, Spider-Man makes quick work of him.

High body count on this adventure. Spidey makes sure that the boy is safe while down below, the water turns into a whirlpool that suddenly erupts into a volcanic spew of wreckage from the crystal compound below.

And that’s that. A wild, weird ride. Cool how he managed to make MJ figure more into the action than usual. The book’s final several pages are an essay by Vess about his trip to Scotland to research this book, complete with photos and anecdotes. Looks like he was very thorough. Such a beautiful book! It was really something to see comics made like this during my formative years. Even in the grip of McFarlane-mania, I was fascinated by this book. The look of the art and the atmosphere of the story. It may not be the most consequential Spidey story of all time, but it’s certainly a favorite of mine.