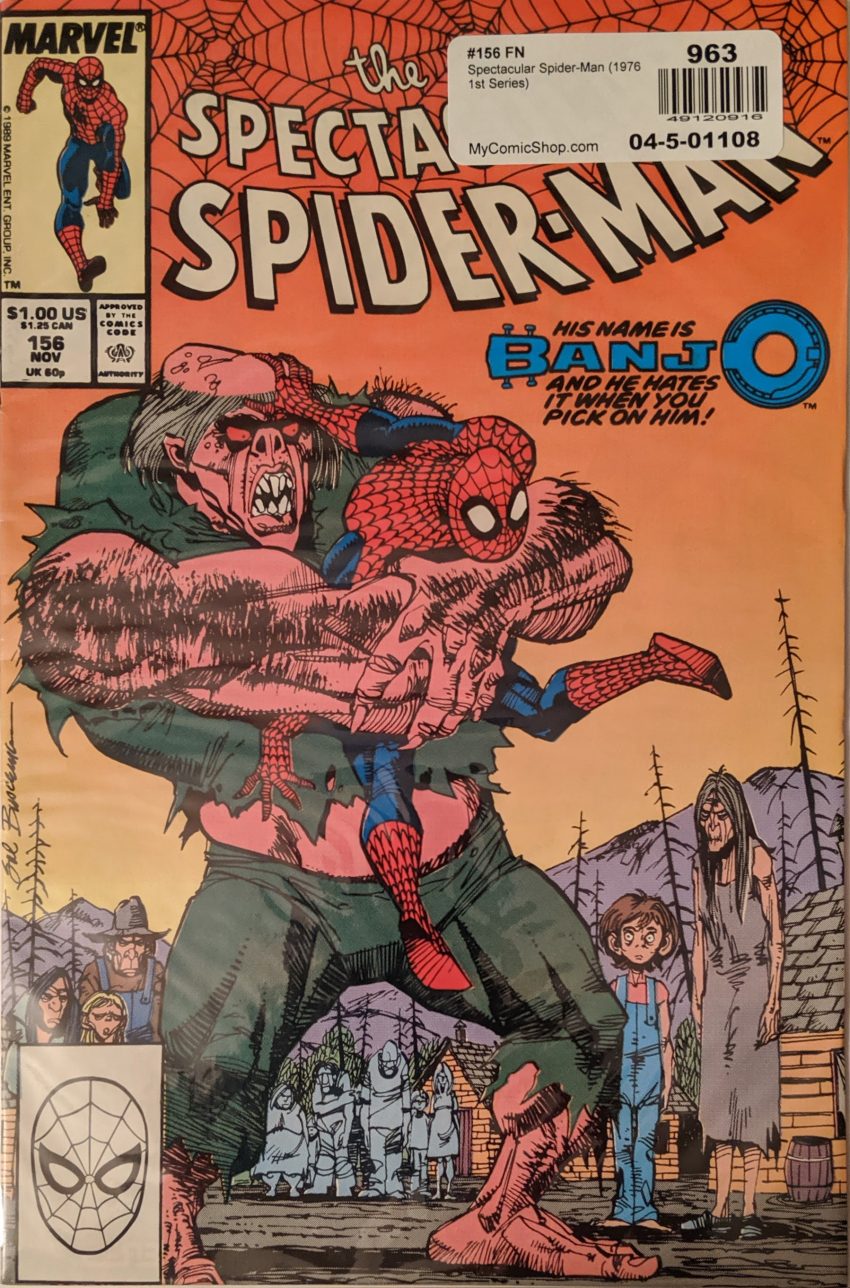 …Do I have to do this? Why does this exist? What… just why? Also, I’ve been noticing Sal Buscema draws Spidey with tiny feet. That never occurred to me in the past. Look, they’re roughly as long has his hands. That’s weird. Sigh. I can’t put this off any longer. Mike Esposito is still pitching in on inks, as Spider-Man has decided to go look for Joe Robertson.

Spidey has happened upon a tiny village right out of every grim stereotype you’ve ever heard about Appalachia. He guesses they won’t be too into talking to him, when suddenly the tree he’s in begins to shake.

That joke feels a bit out of place, but I did like it.

I mean, really. Do I have to do this? I said I would read all my Spider-Man comics, but how could I know something this awful was lurking among them? Spidey is soon subdued by some kind of psychic boy or something, it’s just that kind of story. Let’s please retreat to New York for a minute.

This “late night paint party” has gone almost to 8pm!! These guys are WILD! Once again, some extremely hamfisted foreshadowing about Flash and Black Cat. But that doesn’t make any sense… does it? And, oh sure, now Marla suddenly appears. Turns out, she was in Europe on a research trip and conveniently missed the whole Chameleon thing. Thank goodness. That story coulda been way more messed up. Anyway, JJJ is at work to meet his new boss, Thomas Fireheart, aka The Puma. That’s right, this is really happening, Thomas Fireheart is now the owner of The Daily Bugle. But that will be explained later. For now, we have to go back to… Spidey vs. The Hill People or whatever. Much as I would rather not.

I would take all the Ben Reillys and Kraven’s Last Hunt knockoffs in the world over one more page of this. Whatshername has the little one zap Spidey again so he’s all messed up and then sics the big one on him as he runs into the woods. Meanwhile, we visit Kristy in the hospital. She’s in a sort of support group situation with her doctor and other people with eating disorders, but she still refuses to believe she has one and storms out angrily right as MJ & Aunt May are arriving to visit her.

No fun in New York. Still no fun in the woods, either, as the big mutant guy lumbers after Spider-Man. His head is starting to clear. He thinks he should get out of here, but if any of this happened to Robbie, he’s got to find out. Robbie, who FELL OUT OF A HELICOPTER. I mean, honestly, how could he be alive? I know he is, but how?? They looked to be miles in the air. Whatever, Spidey tries to ambush “Banjo,” but the big idiot is too fast for him and throws him at some trees. Fight fight fight, yadda yadda, I literally do not care. This is all happening above some underground coal fires, and soon the ground gives way to Banjo’s immense weight, leaving Spidey to web him back up to safety.

I’d bet money the explanation for their survival is terrible. Plus, Tombstone planned to kill Robbie after they got away from the jailbreak, why bother keeping him alive now? Ah, well. I suppose we’ll find out eventually. What a terrible issue.