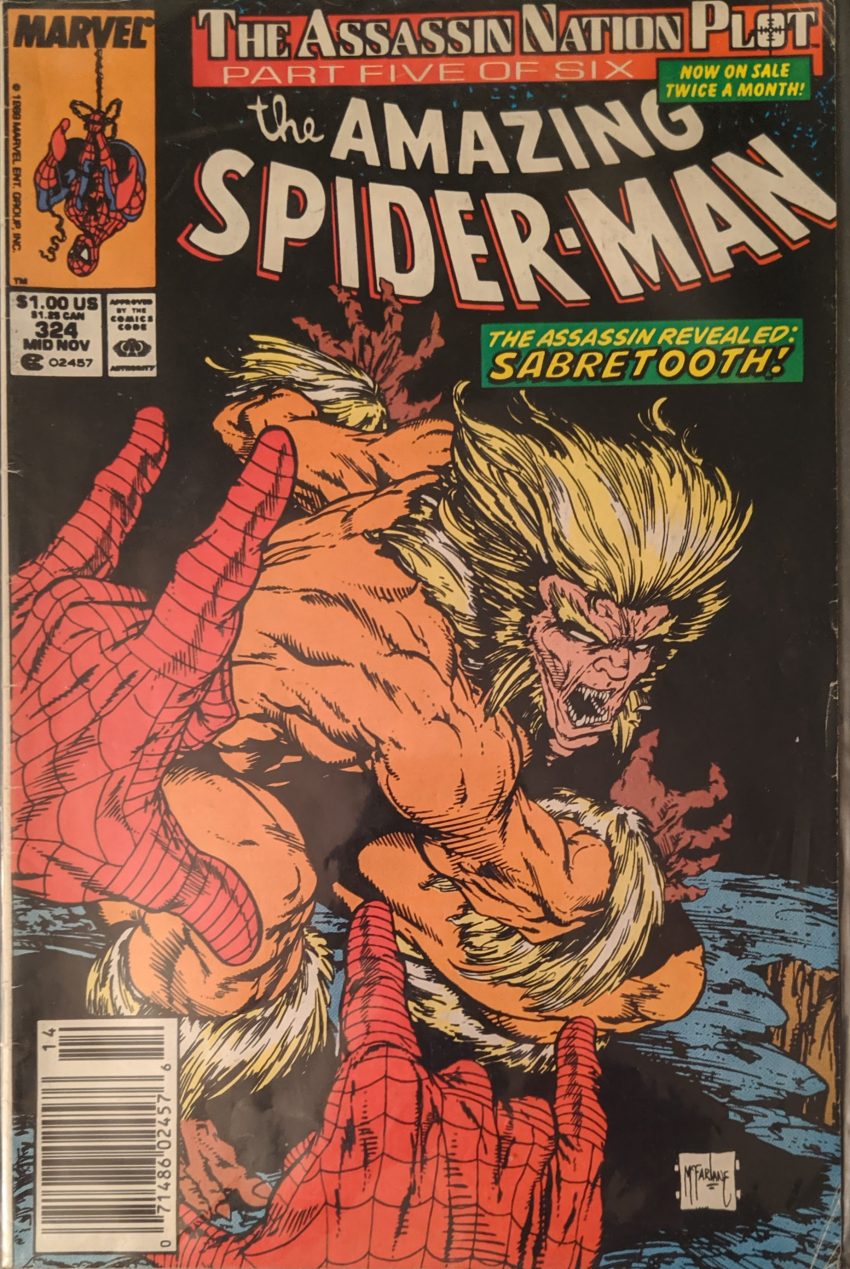 Now that’s a more reasonable depiction of Sabretooth. Don’t let that cover deceive you, though, the ramped up summer schedule was too much, and this issue features the fill-in art team of penciler Erik Larsen and inker Al Gordon. Larsen has been bouncing around the comics biz for a bit by this point, and will be the one to follow McFarlane on ASM when he leaves. Maybe this was his try out for that gig. Spidey will end up being the last thing both men work on before leaving Marvel to found Image Comics. But that’s all for later. While Larsen is another of the flashy new guys not adhering to a house style, he’s from a pretty different mold than McFarlane, something that’s obvious from page one:

Larsen doesn’t draw like McFarlane, but he is trying to keep up some visual consistency here, employing a lot of the tall, skinny panels Todd likes. This is actually really interesting to look at again, because while it’s obviously Larsen, he’s still figuring it out. He does a lot of things in just the first 3 pages that he wouldn’t do a year from now. Spidey’s back in the states, at Ellis Island, which Ultimatum planned to blow up in their misguided crusade to bring the world together by blowing stuff apart. He’s got all the terrorists in a giant web ball, and basically justs asks them why they do stupid stuff like this, until Solo teleports in and machine guns them all Spidey is obviously furious. He also holds up a newspaper out of nowhere, which is pretty funny, and enables a running gag of this period:

I don’t know how visible it is, but the text on the paper is mostly about an imagined feud between Todd McFarlane and Rob Liefeld. Which, in this case, snuck the word “pissed” into a comic that doesn’t allow cursing. Whoops! Let’s let Spider-Man finish his thought.

That gooey blood ball up there seemed pretty extreme to me as a youth. Meanwhile, in Mexico, Captain America and Silver Sable are flying toward the suspected location of Sabretooth. Silver makes it clear she intends to kill him (Good luck with that), while Cap says they need him alive.

Larsen’s got the quiet determination down for Cap. They land in the camp of some kind of outlaws, making short work of them as Cap snags their leader. He quickly agrees to take them to Sabretooth. Then it’s time for another of Michelinie’s totally bizarre attention grabber opening lines that don’t actually make any sense:

Like, I get it, but I don’t think it’s a good idea. The next day, Spidey is staking out the Metropolitan Museum of Art based on a tip from Cap. Solo arrives, and then Spidey tells him the renovations being done to the building are being funded by The Life Foundation (That doesn’t seem likely), so they’re gonna go in there and see if they’re still involved in the plot. This seems very poorly thought out. Even if The Life Foundation is financing the renovation, that doesn’t mean they’d physically be on site. Or maybe it does, we’ll see in a sec. First, it’s back to somewhere in Mexico, where Sabretooth is terrorizing the guys he’s supposed to be working with. Cap and Silver are observing from a safe distance. Cap wonders aloud, for us, why Sabretooth is here when he’s normally part of the X-Men villains the Marauders, but no answer is forthcoming. Then their informant uses a cigar to set fire to canvas covering the box they’re hiding behind, blowing their cover.

Sure, ok. Cap declares that Sabretooth has no pulse and is dead. He’s furious with Silver for killing him. He must not know who he’s dealing with. This feels kinda lazy. Fans will know Sabretooth is nearly unkillable. No one in the audience will fall for this, why would Captain America? They should just haul Sabretooth’s body into a cell somewhere and wait for him to wake up, but instead they leave, Cap saying now their only hope is Spider-Man. Who, at that moment, is rushing a beloved art museum next to a heavily armed nut.

Yeah, they’ve somehow decided the best hiding spot for a fugitive terrorist is inside a museum being renovated? I don’t… get that, but whatever. Spidey and Solo get to mixing it up with the armored goons, whose armor turns out to be inauthentically bulletproof.

Spidey sees Weil fleeing through a skylight, but before anyone can do anything, Weil bumps into a guy doing some welding, accidentally turning his torch on its fuel tank and blowing up the escape helicopter and most of the roof, too. Spidey catches Weil as he’s plummeting to his death (What about the other guy!?!?), but then Solo yells to drop him.

I can think of at least two ways Spider-Man coulda gotten out of this, but it’s just as well he doesn’t have to. Solo is like an even angrier and more shortsighted Punisher.

Gasp! Bad guys aren’t supposed to win! Come back next time for the thrilling conclusion, which will also just give away the mysterious mastermind right on the cover.