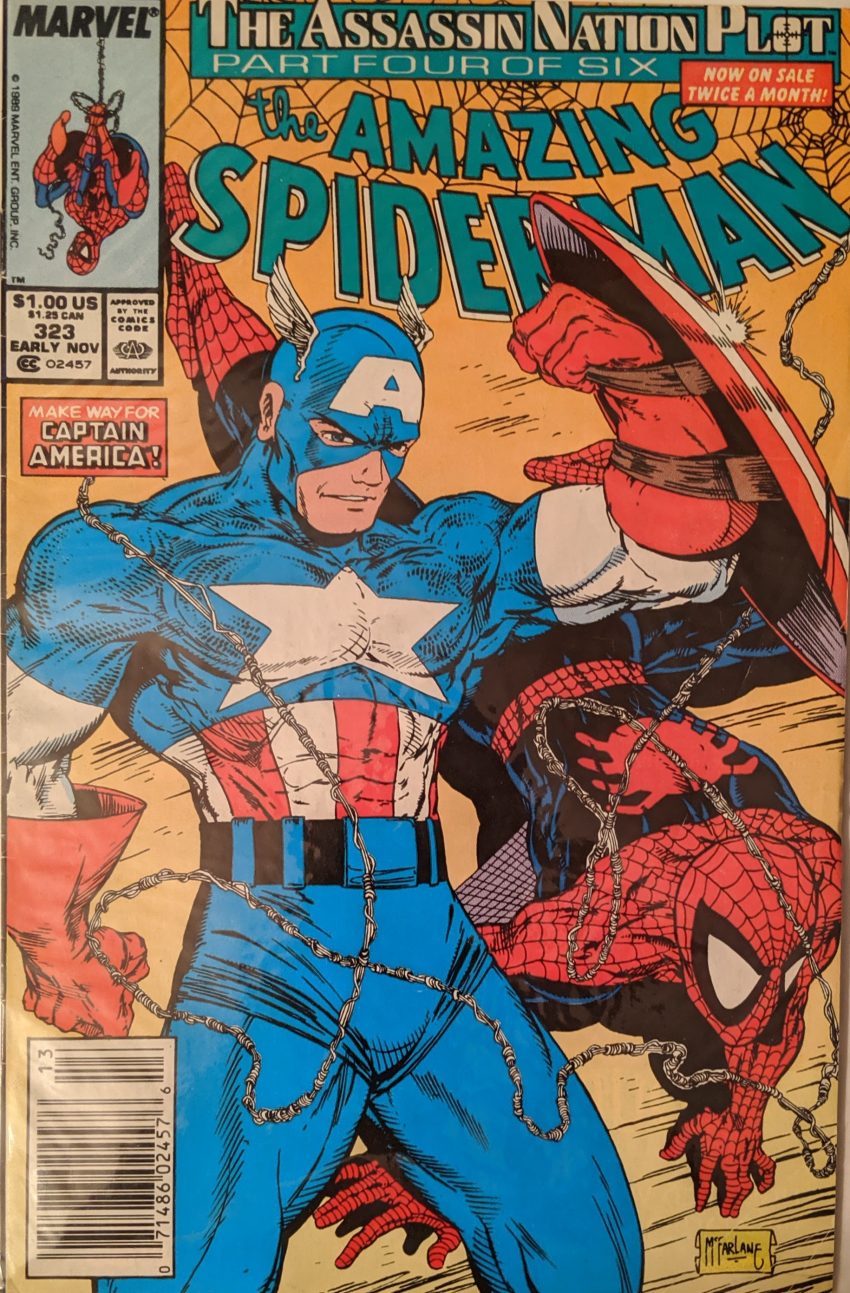 It’s like the old cartoon theme song said: “When Captain America throws his mighty shield/All those who chose to assassinate Symkaria’s Prime Minister must yield!” There are 3 issues of ASM cover dated November ‘89. Three! Plus 2 each of TAC and WEB! “You buy 3 Spider-Man comics a month, but are you ready to buy 7 this month in particular?” At least comics were cheaper then, I guess. But even then, poor lil’ 5th grade me was confronted with 3 issues of ASM to hunt down in corner stores and gas stations instead of 1 this month. Amazingly (No pun intended), I did so. This one’s big selling point is obviously Cap, but as it begins, in the sewers beneath Paris, where Ultimatum is hard at work on more terrorism, a different guest star teleports in: Solo.

Yes, Solo, a man whose personal motto is “While I live, terror dies!” is lecturing people on being to quick to kill people they fear. He leaves one guy alive long enough to tell him that Major Weil is “somewhere on the Symkarian-Laterverian border,” then drops a grenade on that guy, saying his catchphrase while teleporting out. Meanwhile, in Symkaria, the US Amabassador has arrived to see the King. The citizens of Symkaria are not happy to see him, what with the CIA having been implicated in the terror attack, but he’s remarkably understanding of their pain and frustration.

No respect! As Silver and the ambassador exchange some increasingly heated words, Spidey says the important thing is to find the assassin. To which the ambassador replies that he should butt out.

Well, that was a labored bit of coded message, but ok. Yeah, still very clearly 2 inking styles going on. Hang on, though, because he is here!

I don’t have a clue why Cap is parachuting in, but he has, and he’s here. He is already being questioned by reporters as he touches down about his reasons for being here, but says he’s just come to make things right. His appearance on TV is watched by Ultimatum, with Major Weil telling his goons to prepare for the worst while secretly plotting to ditch them all. Later, Spider-Man is feeling dejected, not even having been invited into Silver & Cap’s strategy session, but Cap is Cap, so he brings Spidey in, anyway. Silver says she trusts Cap’s word that the US wasn’t involved, but that won’t be enough for the citizens of the country.

Spidey thinks if he was smart, he’d let that be the end of it, but he hops onto a helicopter with them, anyway, and is soon on a ridge overlooking the suspected Ultimatum hideout.

These would be some of the first comics I read with Cap in them, and the way everyone treats him with reverence even if they’re not American, coupled with how kind he is to Spidey when no one else is, gave me a quick feel for who he is and appreciation for him. Also this:

Get ‘em, Cap! Spidey, Silver & Cap make short work of the terrorists, while inside, their boss prepares to abandon them when Solo teleports in. He kills Weil’s guards as Weil makes for a comically high tech rocket to escape in, but then the 3 heroes smash through the wall and take down Solo.

Spider-Man catches a goon trying to erase their data. Solo offers to interrogate him, but Cap says no, so Silver volunteers, and proves just as bloodthirsty, so soon they have the access codes for the computer.

They colored that Wild Pack guy like Paladin, and who could blame them? I can’t claim to have seen them all, but I still feel confident saying that is the most handsome drawing of Sabretooth ever published. That’s pretty funny. Also: Sabretooth!? Why would you hire that guy? We’ll find out more next time.