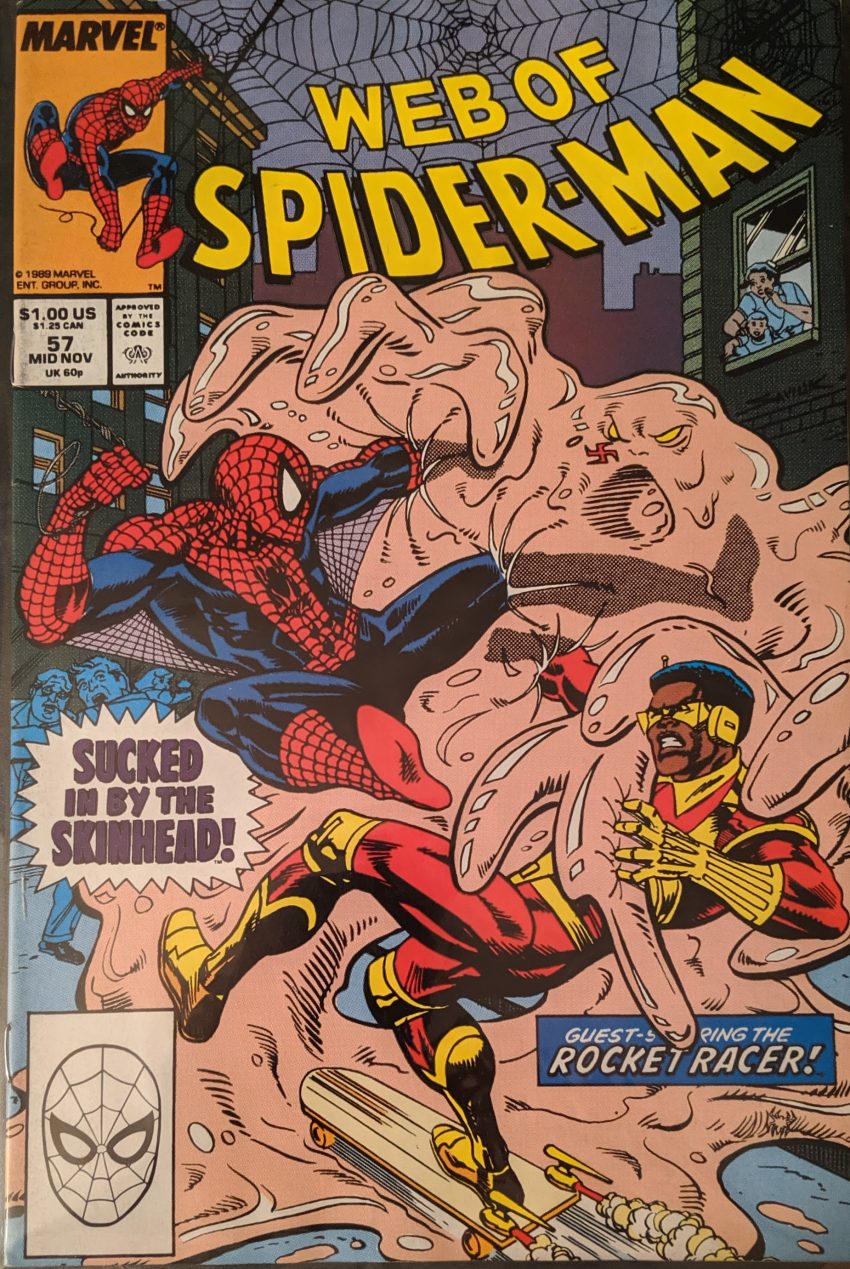 This is getting ridiculous. Not only is Conway making it tough to fit his books around ASM’s 6-part story, he’s not even making WEB and TAC line up anymore. TAC 156 would’ve come out before this, but this issue will quickly make it clear it picks up almost as soon as 56 ended. /shrug So difficult. Not excited for this story at all, I must say, but let’s get to it. As we begin, “Skinhead” is chasing his former associates through a junkyard, and they are terrified. I mean, understandably.

So… so this guy looks like he doesn’t have any skin… but he is… able to turn into a big blob of skin? This doesn’t seem too well thought out. Spidey can’t find Skinhead, so he returns to campus, and to Rocket Racer. RR is pretty shaken up. He hated Eddie, of course, but didn’t plan to melt a dude when he woke up this morning. He says whatever happened is his fault. Spidey doesn’t agree.

“It’s my fault a hatemonger broke into my lab and picked up a random tub of crap which someone else then decided to shoot a missile at” is some extreme lengths for Parker guilt. Spidey heads to his soon-to-be new home, where he finds MJ unpacking. She is very happy to see him.

Yeah, they’re in a studio now? They had a bathroom in ASM 322? With a skylight in it? but the previous page shows the sink and bathtub in the middle of the room. Far cry from the posh spot earlier, but probably better than Aunt May’s house. Thing is, I don’t recall them moving again? I guess they probably do. They sure don’t in a studio in the blocks that happen after this. We’ll see. Anyway, Peter hides in a moving box as MJ’s cousin Kristy stumbles in. Mm hm. She has escaped the hospital, saying she robbed a vending machine for bus fare. Not sure how she knew where to find them, but it doesn’t matter, as she passes out immediately. Peter pops out of his hiding place and says he’ll call paramedics while changing clothes, and then we check in with Rocket Racer. He’s been looking up Eddie, and found out he was an A+ student majoring in “mideastern studies” until last year. He finds out where Eddie lives and decides to go there, but first tries to leave a message for Spider-Man with Peter Parker at The Bugle, as instructed, but he gets Nick Katzenberg. Ugh. Meanwhile, Pete & MJ have gotten Kristy to a hospital. After talking to her doctor, Peter says they should do something, but MJ says SHE should do something.

Grim stuff. This is a pretty melodramatic subplot. When was MJ “making excuses” for Kristy? Ah, well. Peter has gone to The Bugle and discovered Katzenberg intercepted his message, but Kate Cushing knows where he’s going. Eddie’s house, of course, where Rocket Racer already is, talking to Eddie’s dad, who says he’s always angry and looking for someone to blame for his failures. One thing about Eddie’s dad:

That is a gross twist. And not just because of the blob of skin. You’d think a story about fighting Nazis would be a no-brainer, but Conway is muddying the issues way too much here in what feels like an attempt to make it more complicated. “It’s not all black and white, this Nazi is a Jew!” is just… wildly unsatisfying. RR is suitably horrified by the gross blob that is totally unfazed by his little missiles, and speaking of gross blobs, Nick Katzenberg is outside! Take that, fictional character!

Oh, is he a monster? I hadn’t noticed. Spider-Man appears on the scene, but doesn’t fare much better than Rocket Racer in trying to subdue Skinhead. They bash each other around a bit, and the Skinhead seems to have Spidey on the ropes, and his dad does the whole “It’s me you hate” thing people do in situations like this.

Soooooooo is Eddie ok now for no obvious reason? What even… Ugh, whatever. This story sucked. I just wanted to see Spider-Man beat up Nazis and then give a speech about how hatred never wins or whatever, not all this nonsense. Come back next time for more of The Assassin Nation Plot. Sure to be more fun, despite its name.