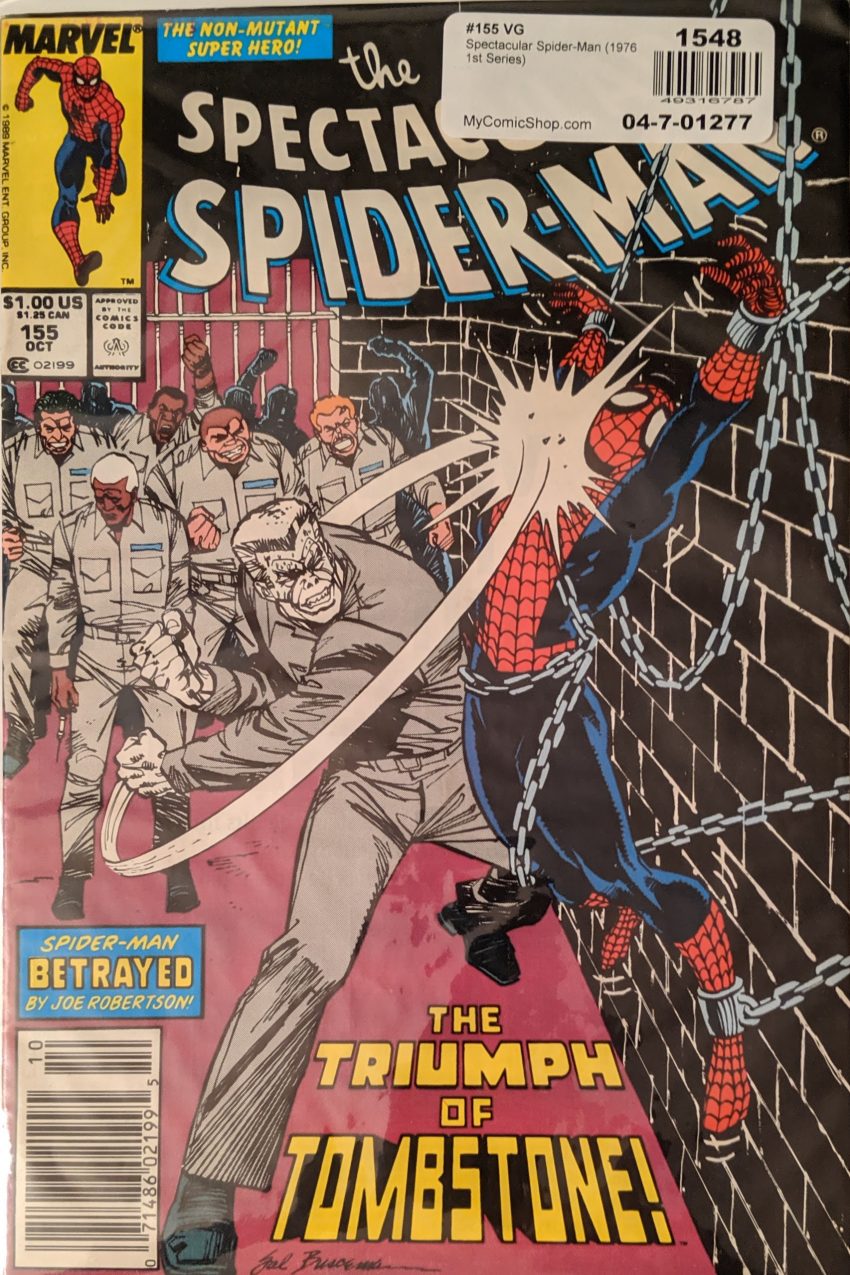 Having seen the Lobo Brothers plot to something like a conclusion, I think we’re in for something like a finale for Tombstone/Robbie in jail here. This month, Mike Esposito pitches in on inks, and the difference is striking. Sal Buscema has really been applying a layer of grit and texture that is sorely miss here, as Spider-Man once again breaks into the prison Robbie’s being held in. He recaps the events of WEB 55 as he sneaks into the facility, and then further recaps having heard the shocking news at the end of ASM 320 earlier today, in case you’re wondering why this one has popped up right after ASM started a 6-part story. Peter was really stressed, obviously, asking MJ what he should do, but she didn’t know, either. He asked Aunt May how she was as casually as possible, but she didn’t talk about it. He still didn’t know what to do.

Spidey randomly talking about his previous time being drugged is really funny to me. Like Joe has any idea what he’s talking about. “Wait, what happened when? Somebody was impersonating Jonah? Tombstone, can we wake him back up, I need to hear the gossip!” Anyway, Tombstone hoists Spidey up and explains that Robbie does what he’s told because he’s scared, because he’s been scared as long as they’ve known each other, Robbie looking anguished in the background.

BWHAMMO! Back in Queens, MJ has gone to play bingo with Aunt May, struggling to decide if she should say anything about the elephant in the room. But it turns out Aunt May got her nights mixed up, and it’s a senior citizens meet-up instead of bingo. They go in, anyway, and see it’s full of seniors organizing groups to do volunteer work. Aunt May seems really into it, and Mary Jane is moved by her selflessness given her situation. Then we move our scene to Osborn Chemical, where repairs are still ongoing after the madness of Inferno hit the place. Flash Thompson is there talking to Harry.

Whaaaaat? That seems to imply something, doesn’t it? Back at the prison, Spidey’s all chained up like on the cover, and slowly coming to. Tombstone says Spidey’s going to help him and his boys escape tonight, and says again that they have a score to settle after their battle in Atlanta, so first he wants some payback. Robbie says he can’t kill Spidey if he wants to use him in an escape, and Tombstone says that’s a good point.

It’s rough seeing Robbie so low. Spider-Man, we see him in spots like this all the time. Still better than being buried alive for 2 weeks, I’d wager. But Robbie, this is maybe the lowest point of his whole life. At any rate, that guy Otto is on the wall when helicopters appear, and then Tombstone and his goons are in the yard dragging Spider-Man as a human shield. THAT was the plan?? Why did they need Spider-Man? They coulda just used that Otto guy! The guards would be way less likely to shoot one of their own than Spider-Man. Sheesh. The guards decide they can’t shoot Spider-Man, but then…

Tombstone drags Robbie onto one of the helicopters, saying he’s going to kill him tonight. Spider-Man is actually still pretty messed up, but manages to leap up and grab Tombstone by the ankle as the chopper takes off, leaving all Tombstone’s goons behind. Spidey thinks maybe he recovered so quickly from the virus because he’s been exposed to it before (YA THINK?).

Robbie and Tombstone survive, of course, but man… how? I am eager to see them dig their way out of this hole.