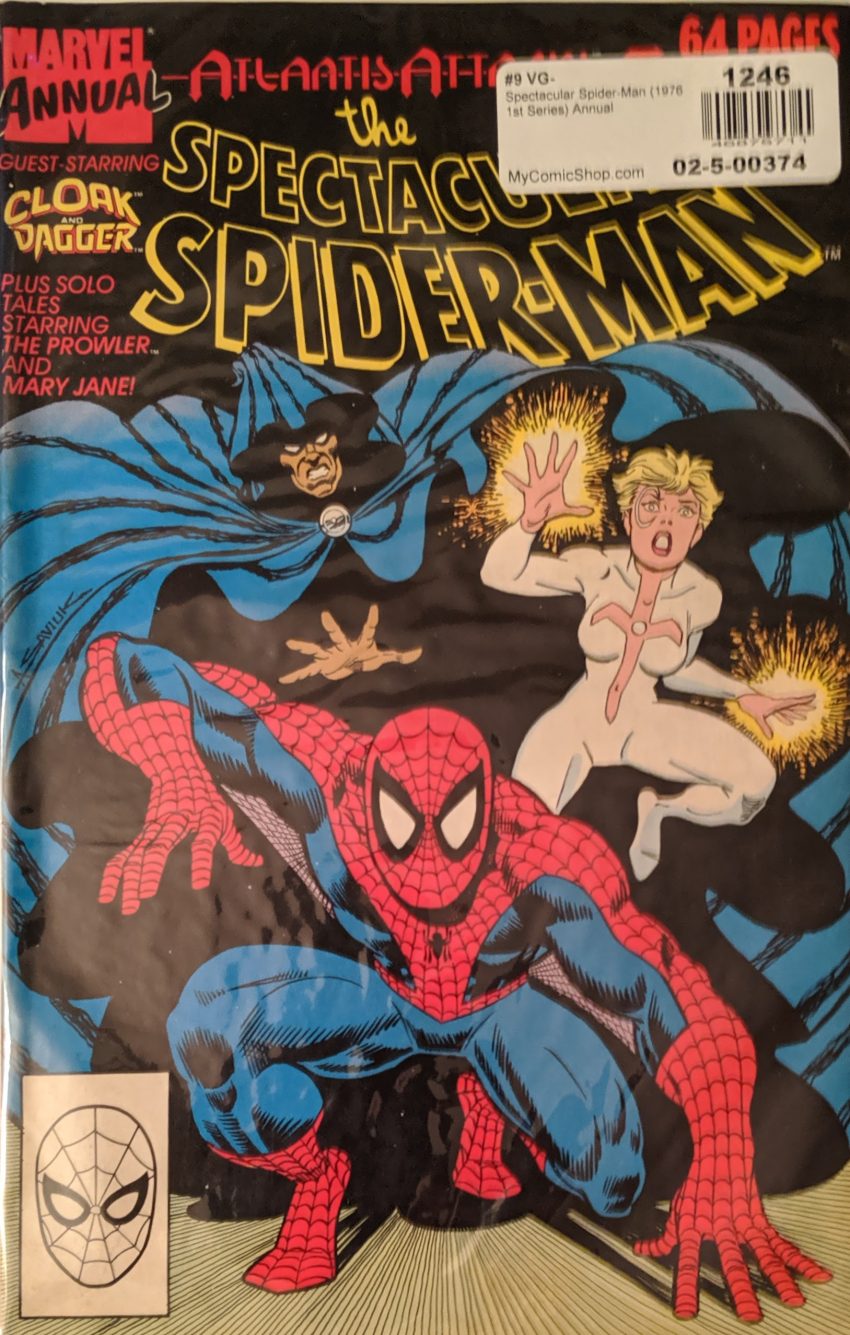 This one is new to me. And look who’s back, our old pals Cloak & Dagger. The recap page says Ghaur had Viper freed as part of their plan to turn all of New York’s drug addicts into Serpent-people. Like, it really says that. Aaaaalright. It’s Gerry Conway writing, Dave Ross drawing, Andy Mushynksy & Mike Gustovich inking, and… and “Steve & Co.” coloring. Good one, Steve (And co). Spidey is watching a veritable army of drug addicts and alcoholics pouring into a meeting of Save Our Society, where Dr. Tyrone will offer his miracle cure for their addictions. He hopes the guy’s not a fraud, and so far, he’s just there in his capacity as a news photographer.

I know very little of Tyrannus, and what I do doesn’t make any more sense of this. Spidey is impressed by his charisma, and then notes Cloak floating in a nearby window, also watching. When he goes over there to say hi, Cloak manages to interpret his friendly greeting as an attack. During this, a mystery figure is watching. Cloak phases inside the wall…

Well, that escalated quickly and unnecessarily. Cloak and Spidey vanish, and Dagger takes this time to tell us she’s blind now? When did that happen? We cut to Lord Ghaur deciding Dagger would also make a sweet Bride of Set, and telling his goons to have Tyrannus mark her. Meanwhile, Spider-Man falls through The Dark Dimension (It has been established since the last appearance here of C&D that Cloak’s body is a portal to a nightmarish dimension) before dropping into Central Park.

Spidey swings away thinking all the problems he’s been worrying about lately are nothing compared to what those people deal with, and Cloak returns to Dagger, who thinks they messed up fighting Spider-Man for no reason (Good of her to notice), Cloak says he was hoping that Tyrone could cure his “hunger for life energy,” then says he needs to be alone for awhile, leaving Dagger to flash back to their origin, which now includes the fact that the drugs that gave them their powers actually tapped into their latent mutant abilities, which makes more sense in the Marvel Universe. It also leaves Dagger alone for this:

Tyrannus’ Lemurian entourage kidnap Dagger off to be one of the Seven Brides of Set, while at The Bugle, Peter Parker develops some photos of the evening. When he’s done, he sees a news report that The Atlanteans are attacking the Eastern seaboard (This is called Atlantis Attacks, after all, not Lemuria Attacks), then swings off as Spidey thinking the world’s gone nuts.

I like Spidey’s attitude on this page. Also really liking Dave Ross’s take on the character, aside from the unforgivable incorrect webface pattern, but McFarlane’s doing it, too, so whatever. I now know Ross drew several covers and ads I saw as a kid and thought looked cool, but had no credits on them. Spidey convinces Cloak to let him help look for Dagger. He found a note saying she was at that new mission for the homeless, so they go break in together. And, again, a mystery figure watches. They split up inside. Spidey follows Tyrannus’s right hand human, “Brother Elton,” after seeing a familiar Sons of the Serpent tattoo on his wrist, while Cloak finds Tyrannus and Dagger.

That seems bad. Spidey continues to follow Elton, while Cloak returns with the book. Tyrannus says it’s an ancient text of the Serpent Cult, and also that Elton is the one who put him onto it. He says he owes Cloak, and promises him a quick death.

So the serum turns them into snake men… but who dresses them like John Carter of Mars aliens? Spidey follows Elton out back, where he has people putting “final stage” patients in ambulances to be transferred elsewhere. Spidey sneaks into an ambulance to see what a “final stage” patient is like (Guess!). Meanwhile, Cloak is being overwhelmed by kind-of-a-snake-men.

The same mystery man who’s haunted this whole story. Who is he? I don’t know.

Feelin’ snakey! Dagger is doing bad, and Cloak agonizes over whether to go back for Spidey or get her some help. Spidey, meanwhile, is discovered in the ambulance by Tyrannus.

Awwwww, man. I don’t have that one. And I don’t think I’m going to get it just for this. I assume Spidey will be fine. The rest of the book includes a Prowler story, Fred Hembeck ranking the Top 25 Women in Spider-Man’s life, and a Mary Jane story by Conway and a completely unrecognizable Dan Jurgens where she has a dream about breaking into prison to kill Jonathan Caesar. Woof. Then she celebrates her birthday at Aunt May’s with a bunch of folks, and has a signed photo of her & Peter kissing sent to Caesar to torment him. Alright. Then there’s more of the Serpent Crown Saga. Come back next time for the final Atlantis Attacks tie-in.