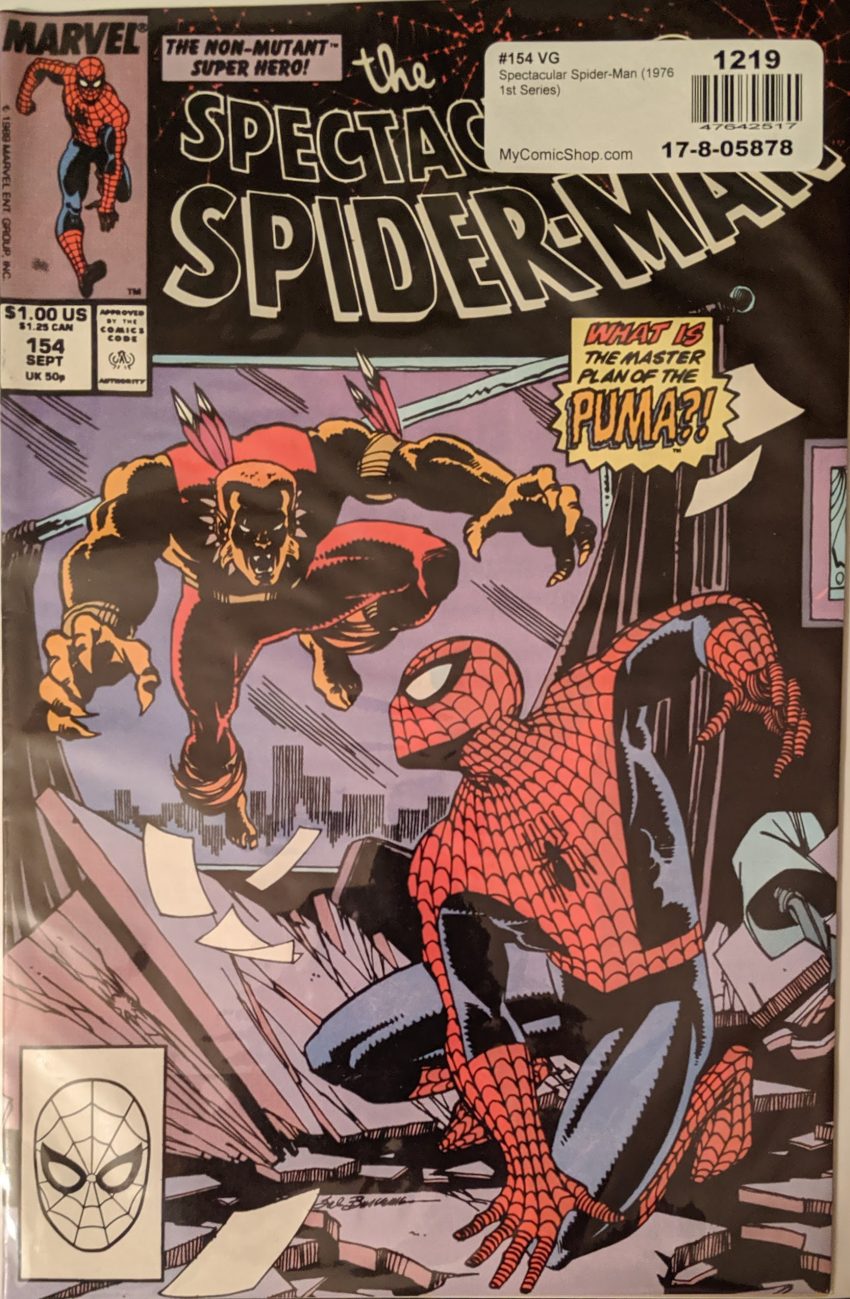 I am… pretty sure I know the master plan of The Puma? We’ll see. We open on Spidey reading The Bugle, wherein JJJ has credited “an unidentified passerby” with his rescue rather than telling the world it was Spider-Man. His time as Chameleon’s prisoner also gave him a lot of info about the gang war that abruptly ended last post. But a hit on his Spider Sense makes our hero abandon his paper to follow a car, which turns out to have Thomas Fireheart, aka The Puma, in it. And he’s just going to his corporate headquarters in NY, doing nothing wrong, because whether it’s ‘71 or ‘89, Gerry Conway just does not care how the Spider Sense works. Meanwhile, at Hammerhead’s mansion, he’s smashing up his furniture while The Chameleon makes fun of him for it because he’s mad that they didn’t get Kingpin.

Vermicelli says no one’s seen the boss, and “The Arranger” (Chameleon, obviously) tells him to keep looking and report back. Hammerhead had no idea this was The Chameleon’s new con. Dimitri says now that he can impersonate Arranger, he doesn’t need JJJ anymore. Did he in the first place? Was The Bugle really that useful in plotting against Kingpin? He probably could’ve learned more by spending an hour in the Kingpin’s building as one of his goons than he did holding JJJ captive for weeks. /shrug I dunno. Speaking of Jonah, he’s furiously bellowing for Nick Katzenberg at The Bugle. Or is he?

(Certainly not sponsored by Meryl Lynch.) Don’t be so sure, JJJ! A lot can happen in the next 30 years. Who’s trying to take over The Bugle? The answer may surprise you. Or maybe it won’t! Elsewhere, Mary Jane is at aerobics class, because it’s still the 80s, telling her friend Regina about how Jonathan Caesar is using his connections to make sure she can’t get any modeling work. While this is indeed what’s happening, I think at this point MJ has just decided that’s what’s happening without any proof, which is not great storytelling, frankly. Her story sounds outrageous enough that Regina gives her the number for a therapist.

Why is Spider-Man standing up his wife? Why, to go break into Fireheart Industries, because “every instinct” tells him a crime is going to be committed there. What? Why? “The guy who owns this building is here, that means a crime is happening!” Our foolish hero breaks into Fireheart’s office and starts going through his desk.

That… has not traditionally been how that works… but… ok. Is this the debut of Puma’s new suit, or was that in Web 50 and I forgot to make note of it? At any rate, I think the red works better for him. They mix it up while Spider-Man insults Puma and his honor and his heritage and whatnot, real classy, all for daring to enter his own building, before demanding to know why he’s in New York. Then we cut to a couple of Conway’s beloved interludes. First, The Arranger has had a bunch of silver bullets made. Oh ho. Will that work on The Lobos if they’re mutants rather than regular werewolves? Who knows? All I know is, I am always making Chekov’s Gun references around here, and here is a literal Chekov’s Gun! Speaking of our furry antagonists, Interlude Two is Glory Grant internally bemoaning her messed up situation as she walks home, where Eduardo is waiting for her. He says he & his brother are waiting for the next full moon, and then they’ll finish the war. Got it. Now, back to the fight.

They keep going for a bit until Puma declares the fight is over, but the next time they meet, they will settle the debt he feels he owes. How ominous. Spidey’s way too messed up to argue and lets him go. So, Peter Parker appears at the hospital to check on Kristy. He’s surprised MJ isn’t there. Aunt May is, but she seems unusually shaken by all this. Kristy’s doctor tells them she won’t admit she has a problem, which Peter confirms when he goes in.

The drrraaaaama! Or something. All this Lobo Brothers/Kingpin stuff comes to a conclusion in Web 55, but for reasons that will become apparent later, that’s not our next issue.