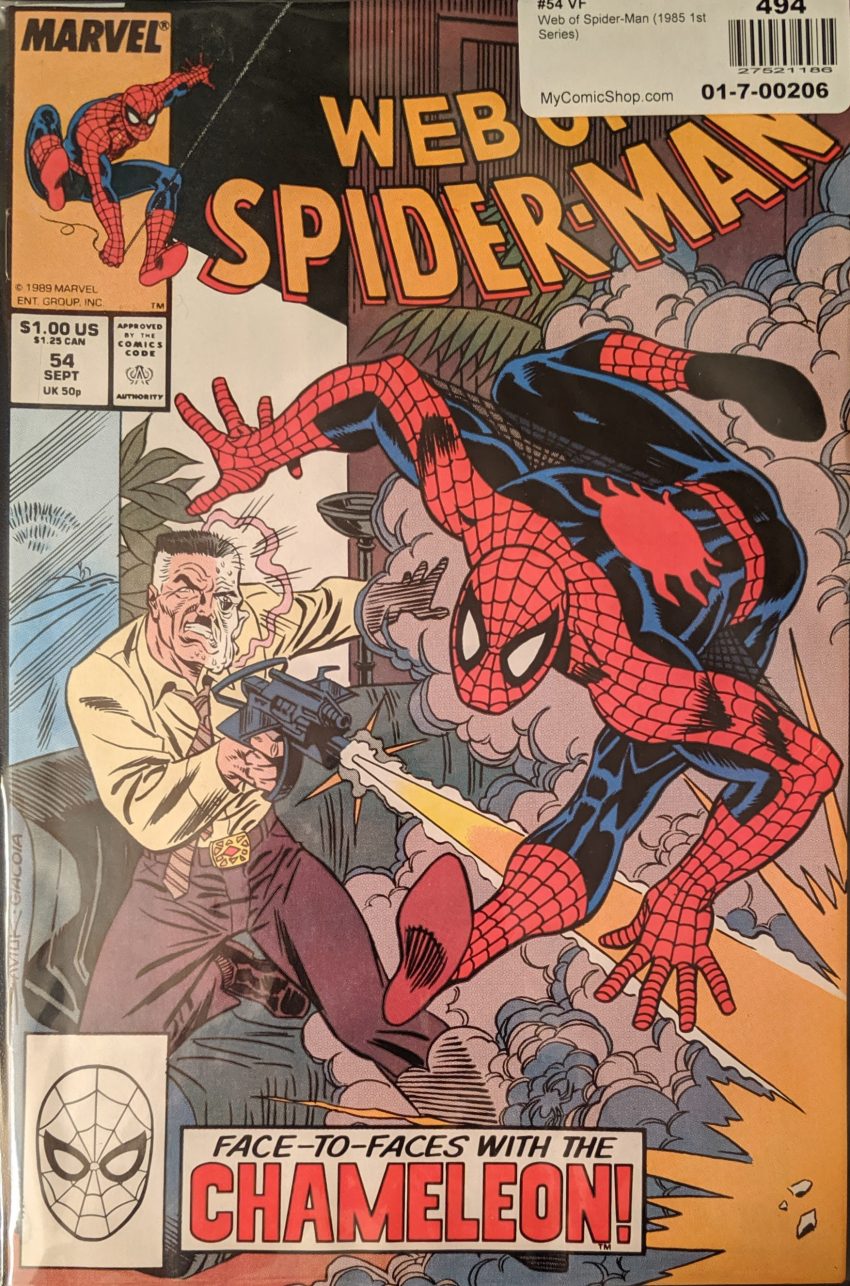 I feel certain I read this one as a kid. I didn’t have it, obviously (Tho I really thought I did, even). I was reading comics out of the library still, I had discovered a couple of schoolmates collected comics, and I had my cousin’s books to flip through once every year or two when visiting, I saw it somewhere. That cover’s really ingrained in my memory. And Alex Saviuk has definitely gotten with the program this month. Todd McFarlane’s makeover of Spider-Man is complete. For good or ill, redefining the “correct” way to draw Spider-Man for the first time in almost 25 years is no small feat. Of course, he also (Perhaps inadvertently) shattered the idea that there’s a “correct” way, and in his wake, comic artists continue to draw these characters with no regard for any house style even today. I have mixed feelings about that, but this post isn’t about that, it’s about werewolves, mobsters, and a putty-faced Russian weirdo manipulating them all. And Kristy going to the hospital. And Spider-Man, theoretically. Lotta business! Amid a hail of their goons’ bullets, The Lobo Brothers leap out of their helicopter onto the roof of Kingpin’s building and get to work on his goons.

Ya know, Conway has done this pretty well, in truth. The Lobos set off for Fisk’s tower at the end of Web 53, and he found a way to keep the story moving in Spectacular 153 while still letting the Lobos reach the tower here. You’d probably have a lot of questions if you only read Web, but you wouldn’t be lost, by any means. Just don’t think about ASM… The Lobos fight their way into Arranger’s office, but he has a fancy escape elevator “for just such an emergency” and gets away. They don’t really care.

Gasp! Is this the end of Wilson Fisk? I dunno, we switch to Spider-Man, still reeling from the extremely specific virus Chameleon hit him with last issue, which he dutifully explains to us as he tries to swing to the Kingpin’s building as best he can. Already there surveying the grisly (Especially for 1980s standards) scene are the cops, Joy Mercado and Nick Katzenberg. Nick is loving this, being as gross as possible, and Joy is not into it. Then they all reach Kingpin’s office.

Huh indeed, everyone. What… purpose did that serve? I do not understand. Also, I guess The Lobos had to go back out in the hallway to get osme blood for their sign. Less spooky if you imagine them doing so. Anyway, Spidey swings away, thinking he’s too sick to be a part of this anymore tonight. But he doesn’t get away before Katzenberg gets a photo he can use to tie Spidey to the massacre, naturally. Peter barely makes it to Aunt May’s house before passing out. Then there’s a very Gil Kane inspired page…

…and then Peter wakes up. MJ informs him he’s been sick for 2 days. He seems better now, though. Until he sees the Bugle headline linking him to the gang war, just as Katzenberg planned, and he gets furious for a sec. Then he remembers they told him Aunt May was at the hospital before he passed out, and learns about Kristy. He & MJ go to see her in the hospital, and her doctor explains her condition to them since her parents are “traveling in Europe.” Mostly to Peter, actually. Once the audience understands bulimia a little, Peter asks MJ what she thinks. And probably doesn’t get an answer he expected.

Now, I’m not one to put intentions in a creator’s head. I loathe when critics and culture writers decide what an artist was thinking and then tell you about it. But, in the oft-reference Comic Book Creators On Spider-Man, Gerry Conway said he was going through a messy divorce at this time, and had trouble writing a happily married Peter & MJ. One has to wonder if this rather random bit of marital strife stems from that state of mind. Purely conjecture on my part, your honor. Anyway, Nick Katzenberg is on cloud 9 at The Daily Bugle, to the disgust of his coworkers, when…

Well, then. Time for a showdown!

Ol’ Dimitri has just fired “a compressed gas pellet holding a fatal quantity of cyanide gas” at a stunned Spider-Man (Oh, NOW it’s lethal toxins!), who barely avoids it. He’s holding his breath, tho, so he follows “Jonah” out of the room to safety.

This doesn’t really jibe with the plan Chameleon was laying out as Spidey arrived, but ok. He causes the ceiling to collapse and flees, saying his plan is on schedule and Spider-Man can’t stop it. Spidey is about to chase after him when he hears some noise from the closet.

It’s all coming to a head! But not in ASM, of course. This month saw 2 issues of ASM, 319 wrapping one story and 320 starting a new one, as if none of this was going on. But we’ll keep following this story in Spectacular next post.