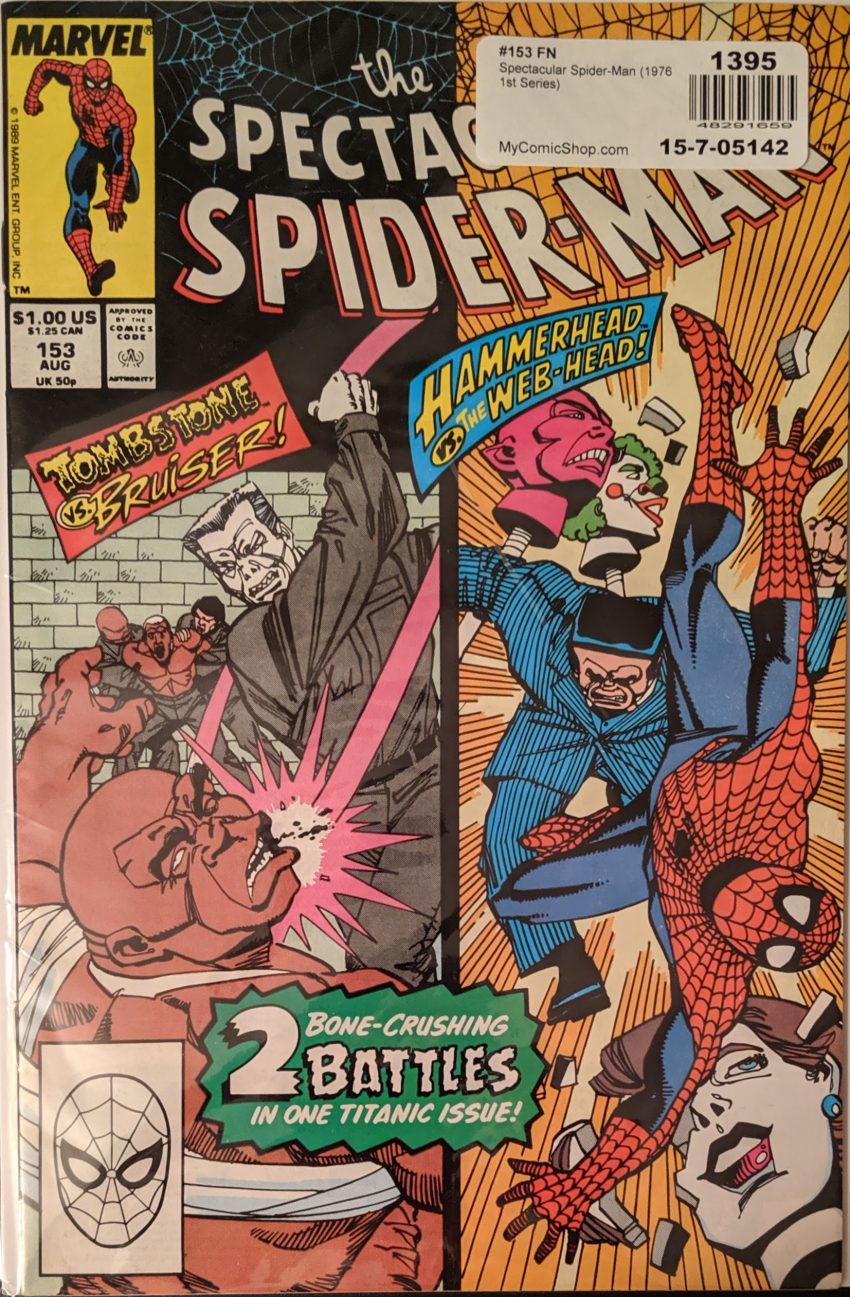 Wow, Sal really went in on the denser web pattern here. But my first reaction was it looks like mid-80s Al Milgrom covers, like MTU 148. Al was already tinkering with the denser web pattern back then. Anyway, neither of the battles advertised here involves the helicopter full of werewolves we ended last post on (This blog lets me type some really weird phrases), so that’s a surprise. We open on Joe Robertson, who, despite his age, is super buff!

Sal insisting on drawing Bruiser’s tooth gleaming almost every single panel he appears in is only getting funnier. Joe wants to know why Bruiser is helping him, and Bruiser says it’s because Joe reminds him of his older brother, Stu, who he hasn’t seen in 15 years. As Joe keeps hitting the bag, Bruiser says soon no one will want to mess with him, including Tombstone. Who happens to be watching with his goons, and declares they’re killing Bruiser tonight after lights out. But, hey, about that helicopter full of werewolves…

Quickly becoming a stock Sal Spidey pose up there. The old timey outfits mark the shooters as Hammerhead’s mob, which becomes more apparent when Spidey dodges away from them and J. Jonah Jameson pops out of a door and tells him to duck inside. Hammerhead observes all this, saying as soon as Kingpin and The Lobos wipe each other out and his partner deals with Spider-Man, they’ll run this town. Mighty optimistic, HH. In Queens, MJ arrives home from aerobics class (The 80s!) to an ambulance outside. She fears something’s wrong with Aunt May, and is shocked to see it’s Kristy being loaded in the ambulance. I don’t know if it’s been stated yet, but we’re told Kristy is 13 years old. Rough stuff. Speaking of…

Spike guns? One could make fun of how gigantic Bruiser is, but in a comic that also features The Kingpin, you really just gotta roll with it. Back in Manhattan, we find “JJJ” has lead Spidey into the “Eastman and Son Theatrical Supply Warehouse,” where he explains his presence by saying Joy Mercado had secured an interview with one of Kingpin’s Lieutenants, but he wanted to meet personally (Not bad!). Then Hammerhead’s goons bust in acting like they want to kill both Spidey and JJJ.

In the midst of the battle, Chameleon is able to catch Spider-Man offguard and hit him with the needle, which he says contains a “highly efficient, nearly lethal” virus. Why only nearly lethal? Spidey passes out, and we head back to the prison, where Robbie is pulling the spikes out of Bruiser. Everyone knows you don’t do that! That just gives him a chance to bleed out faster! Tombstone’s buddies return with a key. Bruiser gets to his feet, telling Joe dying isn’t a big deal, it’s making sure you don’t die afraid. Tombstone enters the cell and it’s time to fight. But also:

That really is Hammerhead’s origin, as bizarre as that sounds. Harrow just made himself a cartoon mobster out of an actual guy. Tombstone starts beating on the mostly helpless Spider-Man as Tombstone starts beating on the badly wounded Bruiser. Joe begs him not to, but that doesn’t get him anywhere. Hammerhead lets Spider-Man believe he’s allied with J. Jonah Jameson while he beats the crap out of him, and then Bruiser is done. Tombstone tells him to beg for his life, but he won’t, of course.

Nice showing for Spidey there. Back in the prison, Tombstone beats Bruiser to death, talking about how he wanted to die a man, and good for him. Then he says he & Robbie are going to have a talk, one-on-one.

Poor Bruiser. He started out with the uncomfortable implication that he had stereotypical intentions towad Joe, but he wound up alright, in the end. And yes, ASM continues to be a parallel universe, untethered to the continuing events in the titles published before and after it every month. That’s so messy. And it only gets worse as ASM begins its twice-a-month summer schedule right here. So, for the next 2 months, Michelinie’s storylines are proceeding as fast as Conway’s, and never the two shall meet. Seems like a weird publishing strategy. I am actually really liking Sal’s take on the McFarlane Spider-Man here. He’ll level out later to something more in line with his own style, eyes more his normal way, webs more his normal way, but it looks pretty cool like this.