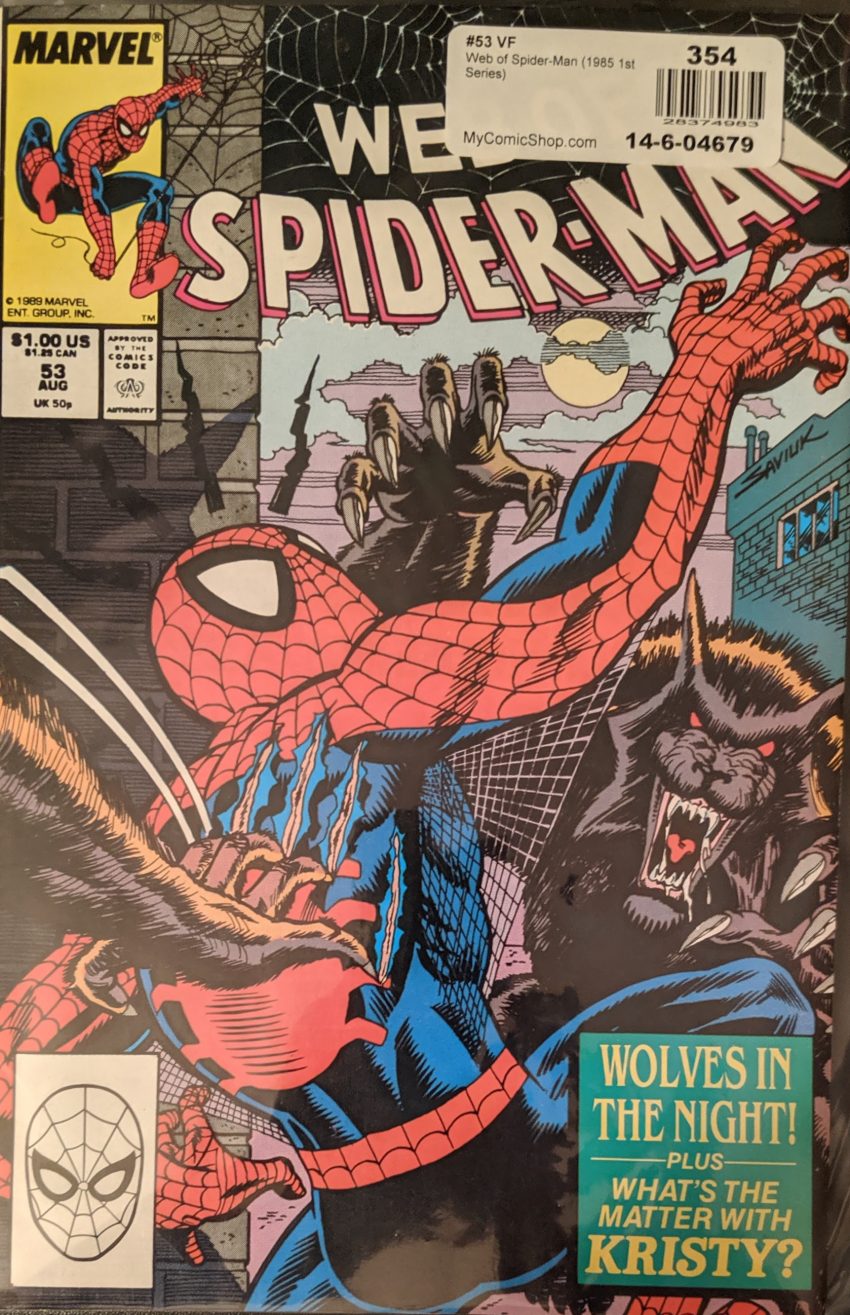 Werewolf problems continue! And it looks like this cover is where Alex Saviuk starts doing a more McFarlane-ish Spidey. But not inside, where Mark Bagley once again guests on pencils. And where Spider-Man is swinging toward a box truck, saying if his contact is right, the next few minutes “might be kinda exciting.”

Looks like Bags is on the way to getting with the program, too. Spidey questions the goons, who of course tell him they’re going to war with The Kingpin, and it’s going down tonight. He leaves them webbed up and calls The Arranger on a payphone. Arrangey is panicked to hear the attack could come tonight, and has no idea how to tell Kingpin, but Spidey says that part’s not his problem and hangs up. Arranger recaps how he got here real quick before biting the bullet and going to tell his boss that a gang led by werewolves is coming to kill him. How will he react? We don’t know, we cut away to Peter Parker at The Daily Bugle, where he’s asking Kate Cushing if JJJ will print a story about the impending gang war.

As JJJ pulls Nick into his office to chat, Kate wonders how much longer The Bugle can function like this, and thinks she’s only stuck around out of loyalty to Robbie. Peter, meanwhile, is met in the hallway by Joy Mercado.

What, and they’re not friendly now? I get Conway wanting to reference his old work, I guess, but… weird. Peter goes off feeling bad for not helping Glory sooner, while Chameleon meets with Hammerhead in the paper’s garage to say the Lobos are attacking Kingpin tonight.

When I was a kid, comics taught me all kinds of things. They dramatically expanded my vocabulary. I learned about various random subjects that came up in stories. And here’s where Spider-Man comics taught lil’ not-quite-10-year-old me about bulimia. Well, not here-here. I didn’t have this issue. But I was still reading WEB and TAC out of the library when I could find them, and obviously, this subplot is not going anywhere for awhile. And also this scene was reprinted in Spider-Man Saga, a miniseries summarizing Spidey’s whole life up to that point. Anyway, later that night, Spider-Man breaks into Glory Grant’s apartment.

Say, Bagley’s Spidey is really looking like Bagley’s Spidey here. Over at Kingpin’s place, everyone’s on lockdown and loaded for war. Arranger checks in on Kingpin one last time, who says they’ll discuss his responsibility for this after it’s over. Meanwhile, Spider-Man has made it to the airport, where he’s begun to suspect Eduardo is a werewolf (Quickwitted, he is), but when he approaches the hangar, he soon as other things to think about, as he is greeted with a hail of bullets. Not that that slows him down too much. However…

Out of the hangar comes a helicopter full of goons, which the Lobos leap into. Spidey tries to hitch a ride with his web, but fire from various machines guns forces him to bail into the harbor. Which means he’s nowhere nearby as the helicopter descends on The Kingpin’s building.

Things are looking grim all over! Except… the next issue of Spider-Man to hit the stands is ASM 318, which literally has nothing to do with this. The way Conway’s titles and ASM didn’t seem to be the same universe becomes apparent. I guess it would be hard to make your two titles more distinct, but… it’s making things weird. So, join us next post as we skip ASM 318 and go on to TAC 153 for more of… everything in this one. Plus more on Joe Robertson & Tombstone.