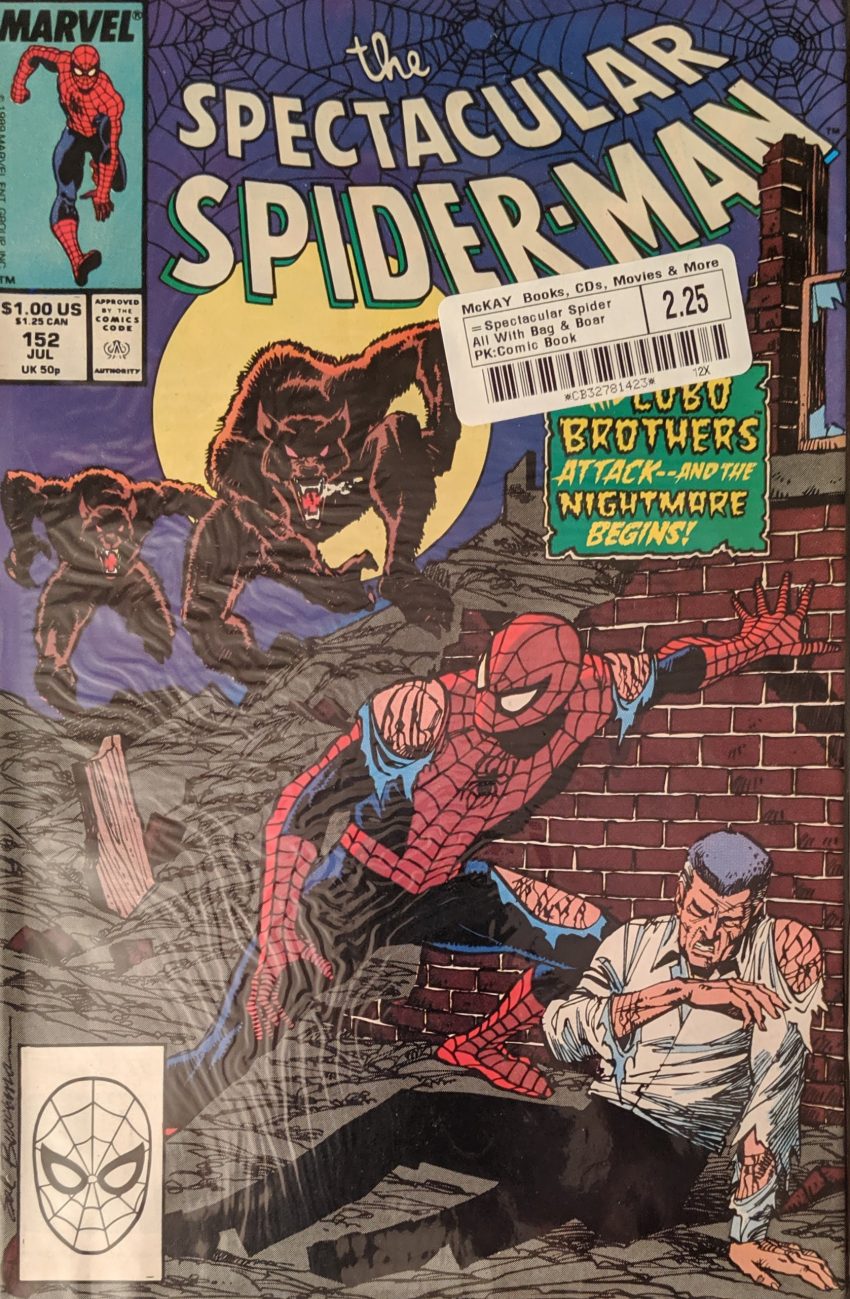 This is the month I’ve been waiting for. Todd McFarlane has been doing whatever he wants with Spider-Man in 20 issues over 17 months to riotous reaction from fans. We’ve seen on the blog that Alex Saviuk & Sal Buscema would eventually start drawing Spidey more in line with ASM, but when? Well, despite the cover (Which would’ve been drawn well in advance of the interiors), the answer is this month!

Way more costume webbing. Bigger eyes. A marked difference from the cover of this very issue. Over the course of the next two pages, the wolves catch and kill Spider-Man and Jonah. Whoops! The End. Didn’t expect that, did you? One of the wolves asks the other how its first kill tasted, and it says sweet (Sweet, bro!)

As if it wasn’t obvious this is a dream sequence, the reveal that Glory is now a werewolf coming AFTER the murder of the title character should be a dead giveaway.

Eat your heart out, Twilight and/or The Underworld series! Now’s the part where Glory wakes up and it’s all a dream.

Except it’s not! Eduardo didn’t kill Glory last issue, and she just passed out. Now… he’s just chillin’ on the bed, still silent after she wakes up. Joy Mercado is still outside spying on Glory’s apartment, wondering when she’ll wake up and see her boyfriend is a bad guy (No worries there, Joy!) when she sees Spider-Man swing by.

Yup. The transition is in full effect. Spidey proceeds to start harassing The Lobo Brothers’ goons as they open an arms shipment, but things take a turn when the other Lobo is there in wolf form. Spidey leaps out of the way of a lunge so hard that he… crashes right through a wooden wall and falls into the harbor. For real!

That is some extremely 70s Spider-Man plotting right there. “Whoops!” And speaking of the 70s, that segue down there leads into the same kinda interaction Peter had with his boys back in the day, as well. Flash has called this meeting of the fellas to talk about how The Daily Bugle is being mean to Spider-Man and they need to “recreate the old Spidey Appreciation Society.” Are you serious? This is a grown man talking. Peter sees an article about prison reform in the Bugle Flash is waving around, making him think about Robbie so we can check in on him. He’s with his new best friend “Bruiser,” and Tombstone doesn’t like that too much.

If you say so, Bruiser. Have a nice rest cure, which I’m sure is a phrase a guy like him would say! Back in the city, Spidey goes to tell The Arranger his tip about the arms shipment was right, and is told again that if he doesn’t help, he’ll be responsible for the killing. Seems flimsy, but Spidey continues to buy in. Hey, how’s that whole werewolf situation going at Glory’s place?

As you can imagine, he killed his beloved in his wolf-y rage. Eduardo says he and his brother are mutants, and that’s why they wolf up (On the one hand, there’s The New Mutants’ Wolfsbane, but on the other hand, Spidey knows regular werewolves, so was that necessary?). He says they, mostly Carlos, built up their mob in Texas, recaps the Punisher hit, and then says the one thing he didn’t count on was her stealing his heart.

Wait, is Glory going along with this? Is she gonna be a willing accessory here? I don’t really know how this turns out. With the way the courts are working under Conway, she could get the chair for that kiss!

Uh-oh. Does Kristy know Peter’s secret (Honestly, I don’t know). And what’s her secret (That one I do know)? So many secrets! Meanwhile, on the letter page…

Won’t someone think of the children!?!? Smash cut to comic shops being raided by cops in the mid 90s for selling “obscene” material to children (Well, to undercover cops, but that’s the same thing, right?). It’s funny ‘til it’s not. Overzealous parents destroyed some lives in the comics industry…