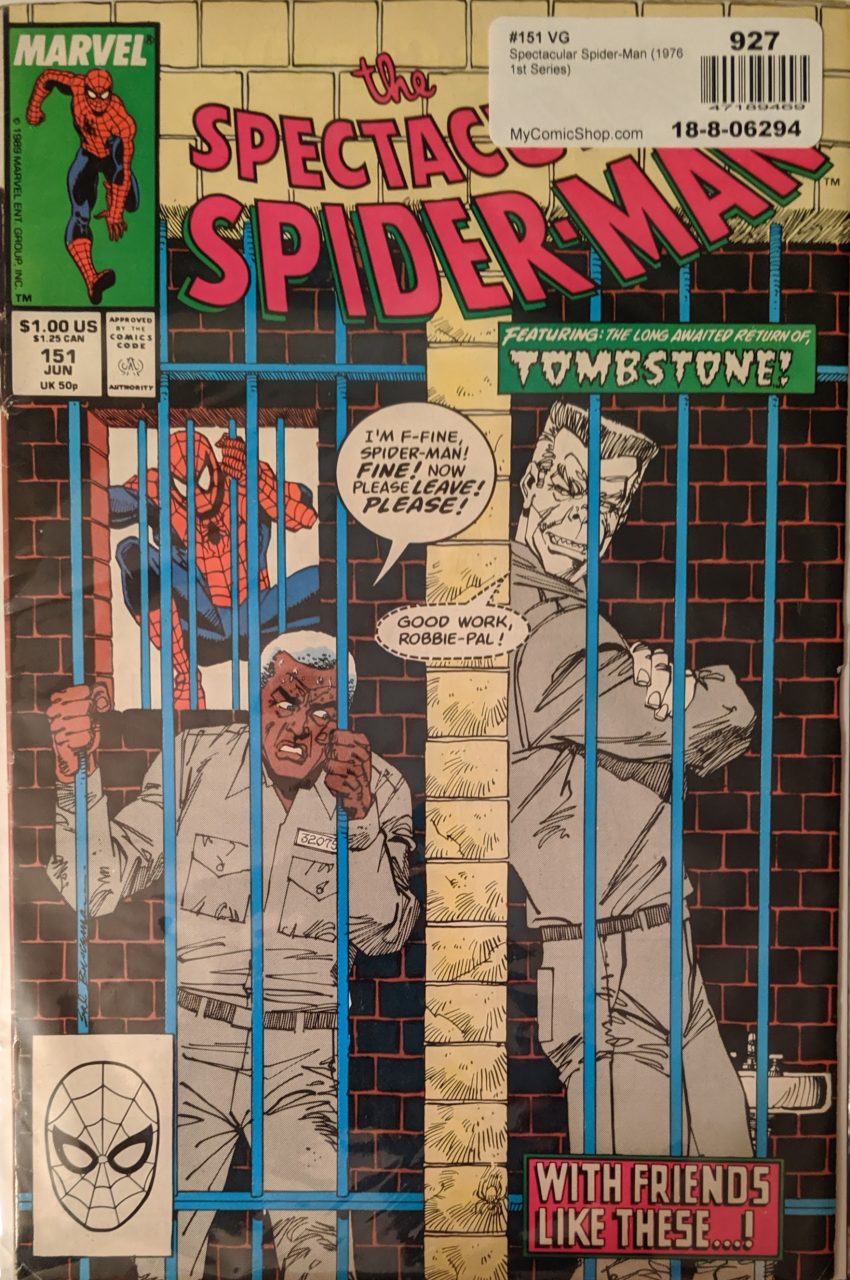 Once upon a time (Like 3, 4 years ago as I write this), I decided I wanted to see how this Lobo Brothers thing worked. I wanted the whole scoop. So, I went to mycomicshop.com and bought a run of Web of Spider-Man issues during the period. But, see, I didn’t know what I was doing, and didn’t realize until I started trying to read them that The Lobos were also in TAC, and I didn’t have those. So I quit reading them, planning to get the TAC issues some day. But I didn’t. Until now! So this one and every TAC to follow for awhile is brand-new to me, and so are the WEBs, for the most part. All dancing around ASMs I know by heart backwards and forwards. It’s the alien costume all over again. As we get rolling, Spider-Man has made a daring break into prison, and soon finds his way to Robbie’s window, not unlike the cover.

Why would Tombstone be pressuring Robbie to hide something that seems A) Like it would be pretty easy to find out and B) Inconsequential? “Don’t tell anybody I’m in here… because they already know, after all?” I don’t get it. As our man swings away, a security guard sees him on camera. He’s about to sound the alarm when he remembers The Daily Bugle has offered a $1000 reward for evidence of Spider-Man committing a crime, and pops the security tape out. Why would The Bugle be offering this reward? The Chameleon knows Spidey isn’t actually a crook…? I don’t get that, either. Elsewhere, Glory Grant has gone to see Eduardo at his hotel, wracked with guilt over stealing that Kingpin file for him, only to walk in on him consulting with his goons.

Google Translate turns “gordinflon” into “fatty,” which makes this scene much funnier.

Come right out and say it, then! I don’t know why Conway insists on calling her “Gloria” now. I know that’s her actual first name, but she’s been Glory Grant forever. We cut away from Glory’s confession to the Puma, to my surprise. He recaps who he is and then sees today’s Bugle, “Spider-Man Connected to Attempted Prison Breakout,” thinking about how he owes Spider-Man a debt and just recently came around harassing him over a story like this. Then he thinks maybe he can do something about it, and calls his assistant. We’ll have to see what that is later, though (I remember what it is, though), we’re off to see Peter & MJ, having a bad time apartment hunting.

Peter has just seen the aforementioned Bugle headline, and storms off in a rage in Classic Conway Fashion. Hey, how’s Robbie doing?

Uh… ok. “Bruiser.” Very creative. Ya know, Nick begs the question: How’s he getting a bunch of pictures of Spider-Man? It’s not like he can know where Spidey stuff will go down. Even Lance Bannon couldn’t be everywhere. Anyway, Spider-Man demands to know whether Nick or JJJ is behind the current smear campaign, and when Nick says JJJ, Spidey is off. A web-and-hot-dog-relish-covered Katzenberg stumbles into the Bugle later just as Flash and Betty are coming to support Glory as she confesses her theft. But…

Chameleon-as-JJJ just dismisses Glory’s concerns about a gang war and her role in it and locks himself in his office. Confused but kinda relieved, Glory and her pals leave The Bugle. She says she has to hear Eduardo’s side of what’s going on (She seemed to pretty well understand it earlier?) and goes up to her apartment, where he is waiting for her.

Egads! Is the end of Glory Grant? I mean, you know it isn’t, but how could it not be? We’ll see. In the letter column, Tama Janowitz has written in to say she loved appearing in TAC during Peter’s book tour. That’s fun. Editor Jim Salicrup said her appearance in the book got it mentioned “on Mtv, in the New york Post, Publisher’s Weekly, Esquire, and many other strange and unusual places.”