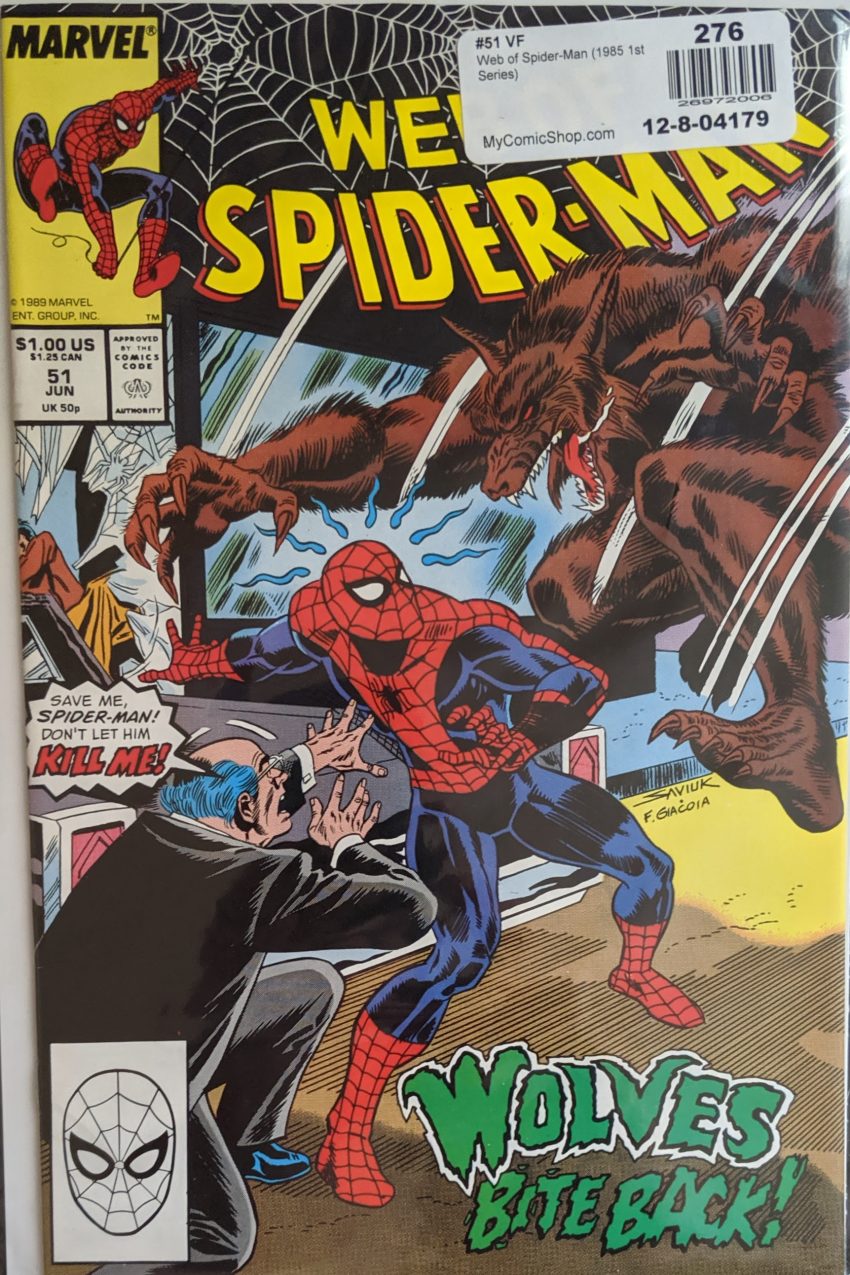 So we’re now into this weird era where, with one guy writing 2 out of 3 monthly titles, it’s like there’s two Spider-Man continuties. ASM references what’s going on in the other books from time to time, but the other two are very tightly connected. So you get the Lobos, the Robbie subplot, the JJJ subplot, the Kristy subplot and so on in Web, a detour into an alternate universe in ASM, and then back to the other stuff in TAC every month. And since ASM is the main title, still in some people’s mind the “real” title, the stuff you get more of is the actual detour. It’s a weird situation, and I think Conway should’ve done more to keep Web and Spectacular more distinct. But he didn’t so, here we go! This month’s Web features guest penciler Mark Bagley. Oh, yeah, that guy from those annuals. I’m sure this kid will go far. We open on The Chameleon having a chat with some dudes.

Well, alrighty, then. Who could these guys want Chameleon to team up with? I hope with every fiber of my being it’s not The Masked Marauder, but I’ve not read this before, I have no idea. Back in New York, Spider-Man’s questioning some of Kingpin’s goons as they catch a bus out of town, fleeing in fear of The Lobo Brothers. Spidey just wanted to know what they were so scared of, and now he does.

It is genuinely horrifying to consider how long Peter had a mullet. Like 10 years, I think. People were so blatant with the trademark infringement in old comics. Disney would sue you into the dirt for this sort of thing now (If they didn’t own Marvel, of course). Elsewhere, Chameleon checks in on the captive JJJ, taunting him that no one will save him because he doesn’t have any friends. Fair point, but what’s up with Chameleon and Marla Madison? That seems like a tricky proposition. Maybe I don’t want to know.

Aw, Glory. Dangerous times at The Daily Bugle. Peter is off to look at an apartment with MJ, who was tipped off by a “flaky” friend of hers. It turns out to be a studio about the size of a closet, though. MJ is not amused.

That’s a surprise. Didn’t expect Conway to pick up on a subplot from a fill-in issue. It doesn’t go well, though. Lorraine is in no mood to talk about her habit. Lorraine’s parents arrive, and as Lorraine yells at MJ to drop dead, they say they’re taking her to rehab. They thank MJ for her help, but she still worries she’s not done enough. Later that night, The Arranger’s limo is attacked by a werewolf.

Why does Conway keep saying “el hombre grande” translates to “the fat man?” Elsewhere, Chameleon is off to meet the guy The Maggia want him to team up with, and a card he was given says it’s Jonas Harrow. That’s weird. Why? Chameleon drives up to a fancy mansion and takes the form of a guard before shooting him and continuing onto the grounds. I was under the impression the goons’ boss, “Mr. H,” was Harrow, but it’s…

Haha, that’s insane. After toying with HH some more, Chameleon reveals his true form and true purpose: to enlist Hammerhead in his scheme against Kingpin. But… why did the card say J. Harrow? Was that a mistake? I’m confused. Hammerhead makes way more sense in the context of the story, but… I dunno. Maybe we’ll see. Meanwhile…

This seems like pretty shaky ground for a moral conundrum, if you asked me. Maybe Arranger can make it stick better in subsequent issues.