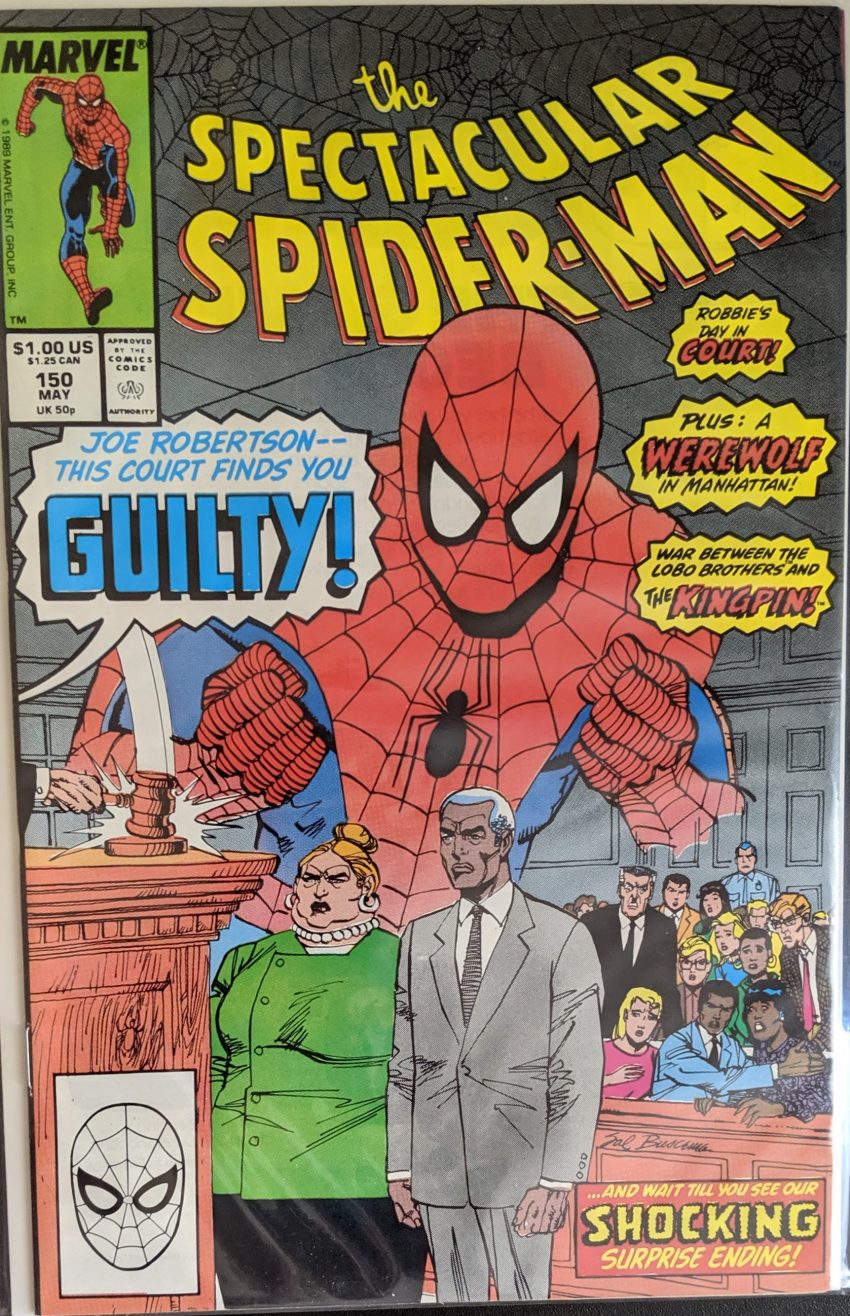 Yes, we are back to Gerry Conway, Sal Buscema, Bob Sharen, and this gross miscarriage of justice. Robbie is in some kinda kangaroo court, where an unrepentant murderer is the star witness against him for not snitching more than 20 years ago. This whole thing is absurd.

A farce, I say! In the courtroom, Peter Parker aggressively recaps how we got here at Mary Jane (This kind of exposition is the worst), wrapping up with…

Remember when we saw JJJ get deeply saddened by the death of Nick Katzenberg in the 90s? I mean, maybe I’m a bad person but… why? No great loss there. But, as you may recall from the shock ending of the previous block in this era, JJJ’s not in right now, and is being impersonated by The Chameleon, who encourages and defends Katzenberg’s scummy behavior outside the courthouse, to Peter’s great frustration. Randy comes over and says the Robertsons are having people over tonight and he’d like Pete & MJ to be there, but Peter says he has some errands to run first. Which turns out to be swinging around brooding as Spider-Man with no real agenda? Way to let your old pal Randy down, Pete-o. He gets mad that Robbie’s going to jail while people like Kingpin get to roam free, and prepares to do his classic “bust into Kingpin’s place and embarrass myself” move, but on the way…

Spider-Man can’t believe he just saw a werewolf. As if he hasn’t met 2 other werewolves on this very blog, one of them created by, let me see, oh Gerry Conway. He goes back into the subway and finds one victim still alive, and as he’s rushing the guy to a hospital, he learns this was a hit on Kingpin’s goons. Hey, he was gonna go bother Kinpgin anyhow, what luck!

Indeed! Man, I miss The Daily Bugle being such a vital part of Spider-Man comics. That’s 2 different Bugle-related plots in this single issue. It’s been 20 years since anything like that was going on in Spider-Man comics. Makes me sad. But, time marches on. Over at The Robertson’s place, Lance Bannon, Kate Cushing, Betty Brant, I believe Ann Macintosh, Ben Urich, Robbie’s lawyer,MJ and many others are gathered to help poor Martha keep it together. On the sidelines, Lance & Kate discuss how JJJ has been acting weird lately, while MJ and Randy’s girlfriend Amanda try to help Martha in the kitchen.

We cut to Robbie in jail, where he gets a cryptic message from another inmate, and then it’s time for Spider-Man’s visit to Kingpin. He tries to goad him by talking about how someone’s trying to destroy his mob, but Kingpin doesn’t know what he’s talking about. As we saw in the previous block on this era, he’s been so obsessed with Daredevil that The Arranger stopped talking to him about The Lobo Brothers’ attacks.

Speaking of the Lobos, Glory Grant wakes up the next morning to find Eduardo nude and bleeding on her floor, and the only thing he’ll say is “there are things about me you must not know.” Sold! Glory patches him up, and he explains that he and his brother are at war with a man in this city, and she can help. Uh-oh! Also uh-oh:

I was just a kid only seeing occasional issues of bother TAC and WEB in this period, so I don’t know how Robbie gets out of this. I knew he went to jail. But I have to wonder if this is supposed to be a story about institutionalized racism, or if it’s accidentally a story about institutionalized racism, because hoo boy. We see a montage of Robbie being processed into prison, and then he meets his new neighbor:

Things are looking bad! This issue features a letter in praise of Gerry Conway’s return by Glenn Greenberg, who would become a Marvel staffer himself in just a few years, and in the mid-90s, work in the Spider-Office throughout the clone catastrophe.