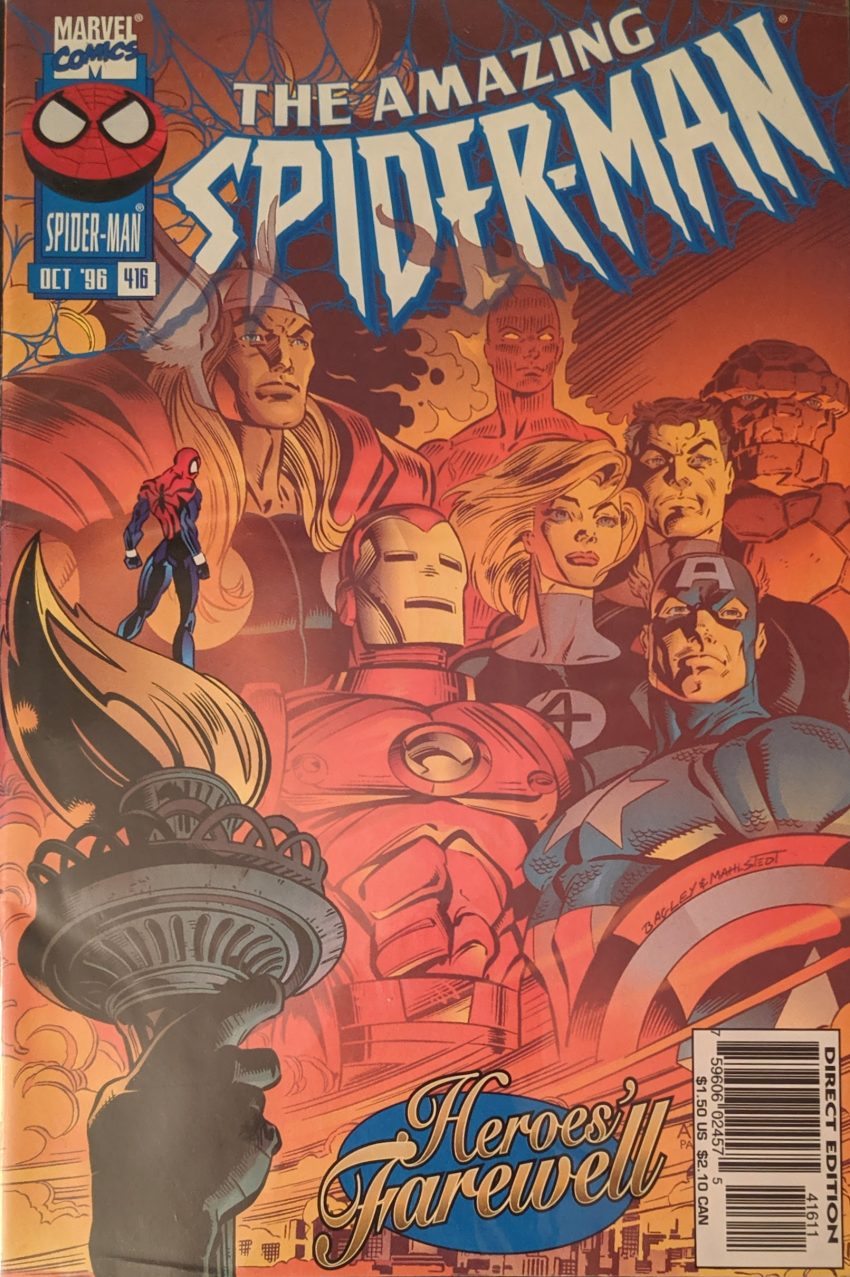 While The FF and most of the core Avengers are off being rebooted in Heroes Reborn, the rest of Marvel U thinks they died heroically stopping Onslaught. So that’s what this one’s gonna be about. This one features guest pencils by Ron Garney with inks by Al Williamson. Garney was working on a fantastic thrill ride of a Captain America run with Mark Waid when the book was unceremoniously taken away from them so Rob Liefeld could make it suck for awhile. I’ve read Marvel creators were blindsided by and very unhappy about the Image guys being wooed back and given these books. So Garney has some time on his hands right now. He & Waid would reunite on Cap after Heroes Reborn, but while they did good work there, lightning rarely strikes twice. Ah, well. As Manhattan recovers from the Onslaught fiasco, some goons try to rob an armored car, but, and you’re never gonna believe this, Spider-Man shows up.

They’re Dead! Some headline. From there we move to a somber Daily Bugle, where JJJ discusses with Robbie how declining sales and damage caused during our Onslaught tie-ins are leading to cutbacks. Then we hop to another location:

That seems weird! Scrier doesn’t seem like the mob type. But we’re off to see Spider-Man trying to go home, only to find Jimmy Six lounging around, so he can’t go in. Then, back to The Bugle.

Egads! Peter’s rarely referenced and ill-defined staff position! A pretty anticlimactic departure for two big name Bugle staffers (Even if Jacob Conover hasn’t been a prominent face in awhile). I always liked Kate Cushing. Hey, remember how Scrier seemed to be acting rather out of character?

Oh-ho! Who is that big-headed fella? I do not recall! I just remember them doing a hard about-face on Scrier and Judas Traveller. Someone finally remembered that sort of mystical nonsense has no place in Spider-Man, and the retcons began. Except, I’m told, JM DeMatteis still wanted to use his version of Scrier in Silver Surfer while the Spider-Office was busy tearing him apart, so things go weird. Luckily, Silver Surfer is outside our purview. Back at The Bugle, a very sad Robbie lays off Peter, assuring him he’ll have more freelance gigs than ever, with a healthy severance package and full family medical for a year. Could be worse! But neither man is terribly happy about it. This is the part where Peter should use that severance package to find a job worthy of his talents, but… no.

For the 2nd time in 10 months, DeFalco pretty much repeats a sequence from ASM 252. Spidey swings the kids away, giving a big speech about how they have to honor the memory of the lost heroes by behaving like them. Meanwhile, “Scrier” reveals to us that he works for Gaunt’s mysterious employer, who, Gaunt says, is focused on a “personal” project right now. While they discuss that, Judas Traveller’s goon Chakra (I think that was her name?) watches through binoculars.

Well, that’s sweet. Baby May. I’m sure you can’t wait to meet her.

Dark Days Are Ahead, the new album by Judas Traveller And His Host! Catch them on tour this summer with Filter and what was that wannabe NIN band, um, Stabbing Westward! 1996!

And in about a year, back on your planet! Ron Garney is not our new regular penciler, though that would suit me. He’s just keeping the chair warm. When does the next guy start? I don’t recall. But it’ll be a long time before we find out, because I’m cutting it here for this block. Next post, we hop back to 1989 for more Micheline/McFarlane stuff. That era is bigger than all the others by a significant margin. Michelinie wrote almost 100 issues of ASM during a period of extreme growth for Spider-Man, seeing the line expand to 4 monthlies, a quarterly, frequent summers where one or all of the monthlies did 2 issues a month, miniseries, one-shots, and so on. So I have to revisit it more often than the others. So come back next time for the block that includes the comics where I began my time as a monthly reader!