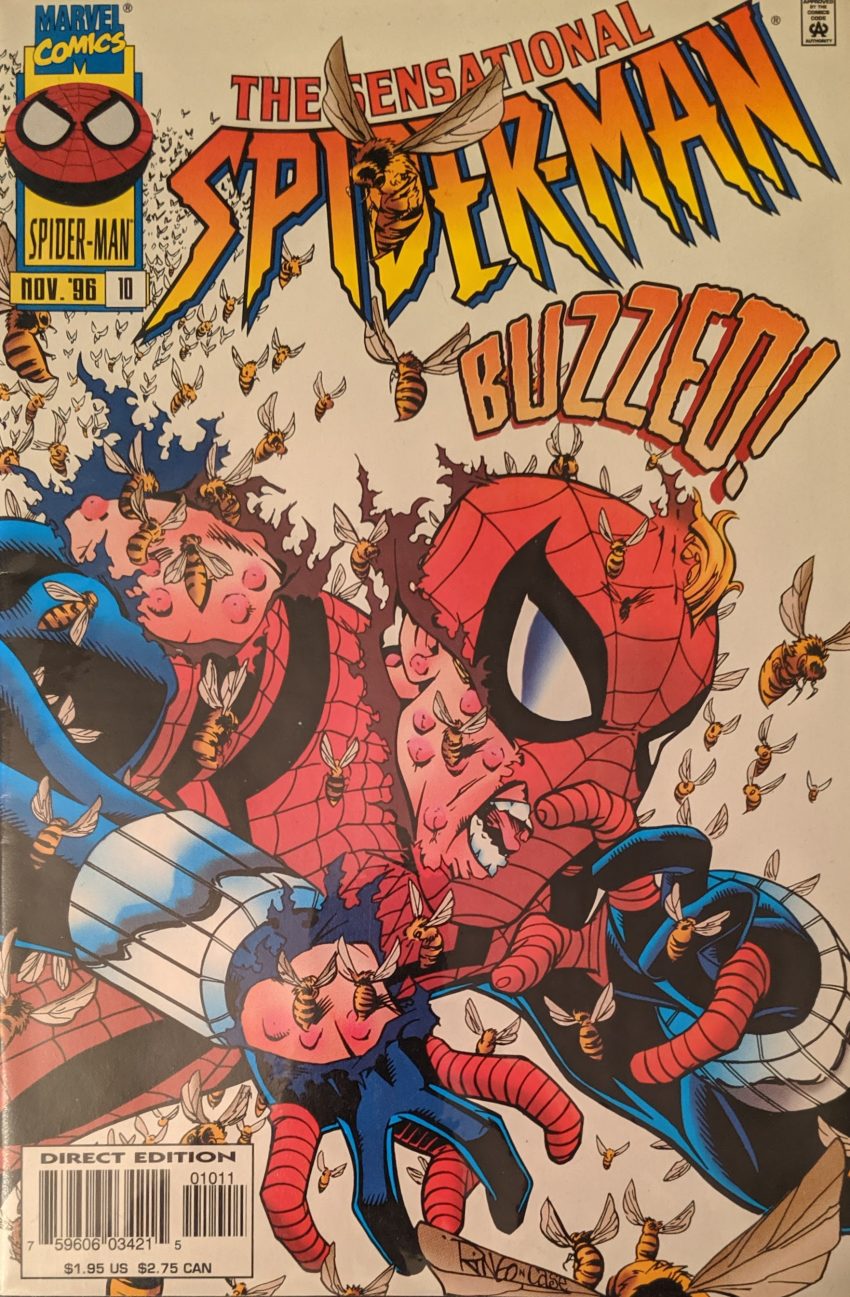 More NAZI BEES. The way this book weirdly insists on downplaying the Nazi part makes me want to highlight it. Someone thought NAZI BEES were a good idea. Who’s that someone? Why, Bill Mantlo, of course. Who else would come up with such an aggressively silly thing? At any rate, Desiree Winthrop is upset that Ben ditched her, but walks out of the show thinking she knows why. Has the other member of the Archie/Betty/Veronica thing they were trying to do figured out his secret like the other one did? I do not recall. Anyway, NAZI BEES.

It was TAC 37, actually, but who’s counting?

Domestic bliss with a Spidey twist. Sure be a shame if this all went horribly wrong, wouldn’t it? At that moment, Spider-Man dives into the swarm, and since they’re all avoiding him, he’s able to reach the whatever-it-was institute, whose researchers are still inside. They say they’re being held hostage and forced to operate their McGuffin Machine to help Swarm absorb all these bees. As they’re telling him this, Swam almost kills one of them to remind them not to betray him, then conveniently leaves.

Sure, man, whatever, this is ridiculous. The nerds power down the machine, and when Swarm comes to threaten them, they say they can’t keep this up unless their equipment is setup on the roof. He falls for it, demanding Spider-Man move everything up there. He and one of the guys move the stuff, Todd DeZago continues to insist on Ben calling people “snacky” over my fervent mental protests, and then…

It totally works. The bee swarm falls apart and Spider-Man manages to find their queen in the thousands of bees, like, immediately, and take her away. The researchers tell the press Spidey is a hero just so we can cut to JJJ watching at home and harrumphing.

Fine! Silly fake out, that was. Hey, what’s on the last page?

Donald Menken? He’s not appeared on panel since Stern/Romita, Jr. Weird to see him again. Guess what, I totally know why! But that’s for later. This issue’s letter col is full of people gushing about how awesome Luke Ross’s art was. These people deserved to have the comics industry collapse on them.