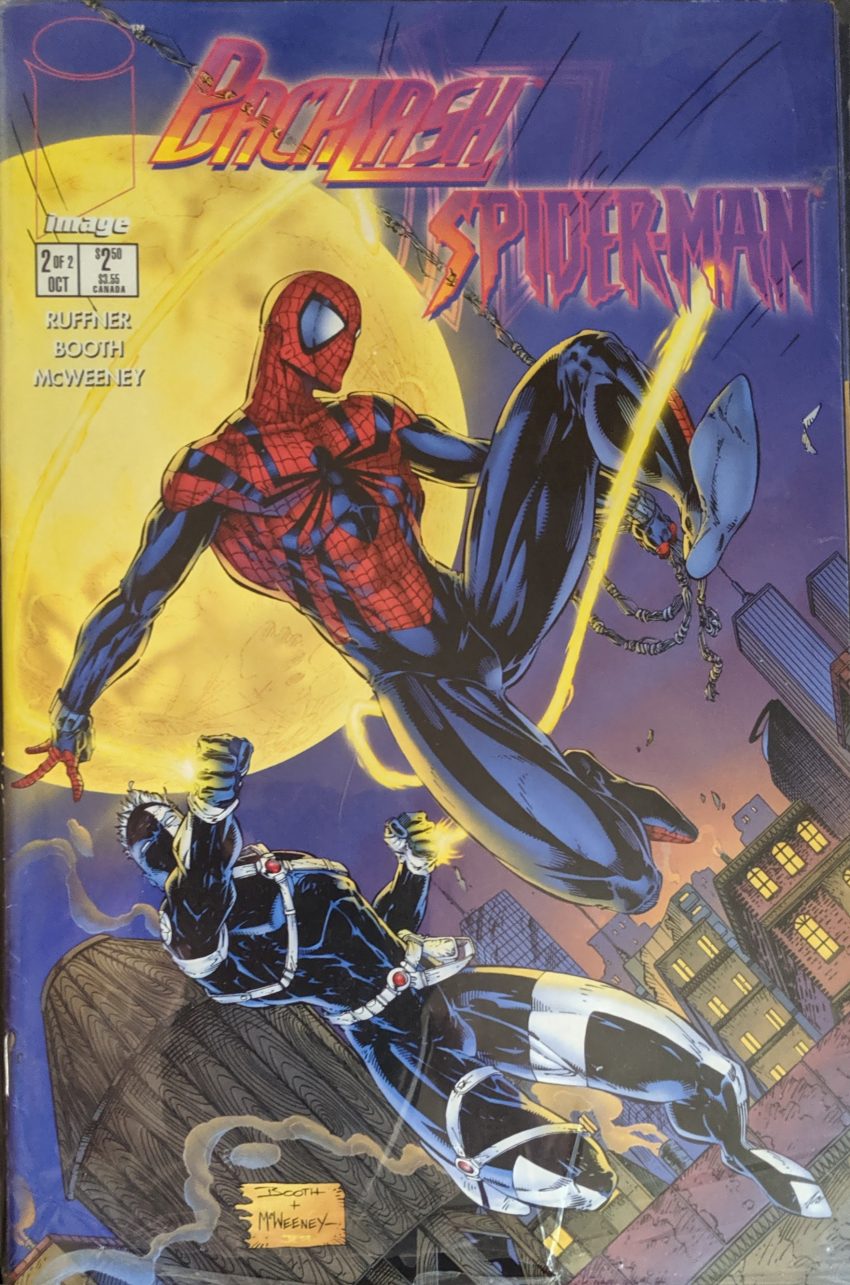 More Image madness with our friends Backlash & Spider-Man. Note the cover date. Another hallmark of the early Image era was chronic lateness. I don’t know if this was scheduled to come out so long after the first issue, but it seems odd if it was. At any rate…

Taboo says Pike is using Venom to collect a bounty on her, but Pike says “nuh uh” and Venom’s like “ok, cool.” However… what’s the end game, here? Venom’s only purpose was getting rid of another symbiote. He’s determined she isn’t one. But he’s hanging around as Pike holds her hostage. Why wouldn’t he just leave? Or get revenge on Pike? Is she not an innocent here? Isn’t that his whole thing? Elsewhere, Backlash has a scientist examining their Venom sample. Spidey chimes in with its origins, sort of getting them wrong. While this is probably bad writing, it could also be read as Ben just messing up since he wasn’t there, which is more fun, so I choose to read it that way. Then we get some backstory on whatever Taboo’s deal is.

Uh, sure. Ok. “It’s the blood rage!” Science guy has turned his Venom sample into a sort of Venom tracker, and Spidey and Backlash set out to save the day. They begin with Backlash having the only one of Pike’s goons that Venom didn’t kill set free, hoping he’ll lead them back to Pike. Spidey and Venom are really just along for the ride on this.

Legend has it any time a comic book calls a woman a whore, Frank Miller gets a tingle wherever he is. Spidey & Backlash follow ol dude to the cathedral, and it’s only when the Venom tracker thingie goes off that Spider-Man notes that, if the Venom chunk they have can sense Venom, it probably works the other way, too.

Cue the heroes smashing through a window in a gratuitous 2-page spread. Backlash tells Spiey to free Taboo while he takes out Venom and Pike. Backlash gets overwhelmed by Venom as Spidey comments on Backlash’s hubris and easily dispatches Pike, as he should.

Feel like something is missing in panel 3. Venom has broken the tracker thingie, exposing the piece of the symbiote, but before he can get it, Pike does.

Things go pretty badly for awhile, and then Spidey remembers they’re in a church. Peter must’ve really thoroughly debriefed him on the whole symbiote thing. He tells Backlash they need to lure Pike up to the bell tower, so they start running.

Where did Venom go?

Does Taboo do anything other than get held hostage?

What an incredibly bizarre ending! Faking Spider-Man’s death? What?? I guess to explain why he’s not hanging out in the next issue of Backlash? What a strange choice. This story didn’t add up to much at all. Which I guess is pretty standard Image in the early days. Image was extremely art-driven. As long as the heroes were striking cool poses and beating up (Or shooting… or beheading) bad guys, the books would sell like crazy. Not that a lot of the 90s Spider-Man we have and will see is much better. The very month after this, Marvel published a Spider-Man/Wildstorm crossover. But it has Peter Parker Spider-Man in it. The second comic with the wrong Spider-Man in it the Spider-Man “special projects” division has published in 6 months. What’s the deal, guys? I’m saving that one for a different block.