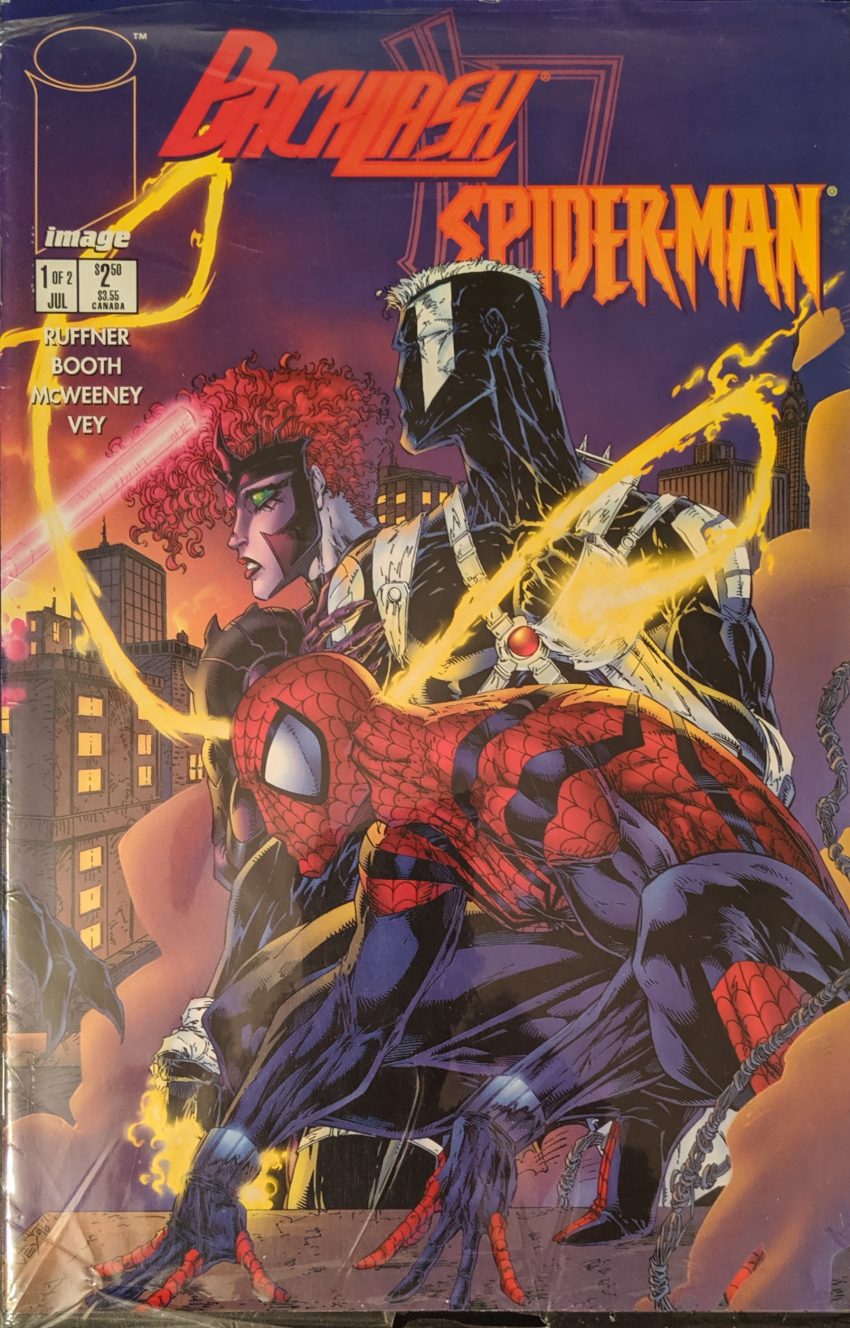 What the hell is this, you may be asking yourself. Rightly so! Welcome to the first of Spider-Man’s crossovers with characters from Jim Lee’s Wildstorm comics universe. Wildstorm was Jim’s corner of Image Comics before he sold it to DC not too long after this. I guess part of his return to Marvel for the Heroes Reborn stunt was various crossovers with his own characters. Backlash is… A guy with energy whips that come out of his forearms? Like the X-Men villain Lee made up in 1990, Omega Red, only a hero this time. A former soldier & government agent who got wrist whip powers due to some crazy-crazy in the 70s, he’s now a rogue agent or something, I think. I don’t really know his deal that well. I’m sure it’ll be explained. But as a follower of Spider-Man and many Wildstorm titles, naturally I was in for this. It’s a far cry from meeting Superman, but it happened, so here we go! This is produced entirely by Wildstorm. You can tell immediately because, by this time, Marvel was the only company in comics not putting creator credits on the covers (boooooooo). Sean Ruffner & Brett Booth are credited with the story, while Booth handles pencils. Inks are courtesy of Tom McWeeny & Al Vey with colors by Jessica Ruffner & Wildstorm FX. The Image titles were stunting on everybody with their digital colors, miles ahead of everyone else, and a big part of their appeal, though not one really acknowledged by most fans at the time. And of all the separate Image houses, Wildstorm FX was the best of them. Enough preamble! We open on Spidey stopping a mugging. Typical Spidey stuff.

Then there’s a 2-page spread where Spider-Man awkwardly explains how he’s the real Spider-Man but a clone lived his life for 5 years but the clone retired and now he’s Spider-Man again. All the best origins are super simple, after all. Meanwhile, elsewhere, a bad guy is beating up some scientists. I wanna say his name is… Pike? He looks like a knockoff of Deadpool. All Image characters look like a knockoff of somebody in this era. He’s injuring scientists looking for Backlash and his sidekick, Taboo, two “PSI Operatives” who are getting in the way of his employers, The Cabal. Who are… sigh, I guess I’ll do this… who are a shadowy organization run by shapeshifting aliens called “Daemonites” who crashed to Earth a long time ago in the middle of war with heroic aliens called “Kherubim” (DO YOU GET IT?). The two alien sides have been fighting a shadow war on Earth ever since, and also sometimes breeding with humans to create superpeople. Got all that? I don’t know if any of it is relevant. Anyway, Pike is interrupted in his torture by the arrival of Brett Booth doing a really faithful take on  Todd McFarlane’s Venom.

A lot of people have drawn Venom by now, but it is how McFarlane did it once his style crystallized (We’ll see that next block). You really get a sense of how advanced Image (Specifically Wildstorm’s) color departments were compared to the Marvel comics of this era. It’s not as good as today, but it looks way better than the competition. Let’s meet our other heroes…

Aaaaaalright. I really don’t know much about Backlash or Taboo. Backlash goes to the crime scene and soon knows his enemy Pike (I totally remembered!) and Venom were there. Meanwhile, Taboo is off awkwardly telling her backstory to a gravestone/us.

Comics in this era were trying really hard to be edgy, and nobody in the mainstream was edgier than Image. Taboo gets back in her limo, only to find it’s now being driven by Venom. Seems like trouble. Later: a huge coincidence!

Prioritizing a big shot pin-up shot of Ben over the action of the car crash really sums up the approach to comics art in this era. As Taboo and Venom start mixing it up, Ben switches into his fightin’ gear. Venom is fully convinced Taboo’s symbiote is an offspring of Carnage, and as we’ve seen, he really doesn’t like other symbiotes (I have no idea what it actually is). Venom is gaining the upper hand when Spidey webs his hand and kicks him in the face. And then…

I have no idea why Venom was just chillin’ back there??

Creeeepy baby. Backlash, still in regular clothes, happens upon the wreck of the limo (So lucky!) and Ben Reilly is now there in his regular clothes? Just hangin’ out? A kid tells Backlash the bad guys took the girl, and Backlash finds and almost touches some of Venom’s symbiote left behind, but Ben tackles him and then runs off. Backlash declares this is all too much for one day and orders his goons to have scientists come study the Venom goop.

Oh yeah. There’s no evidence at all in the art, but Backlash is old, remember? I dunno. Brett Booth just didn’t have old in him, I guess.

A very 90s take on Two Heroes Fight Over a Misunderstanding? Why not?? Fight fight fight, one gets the upper hand, then the other, then Spidey says this isn’t accomplishing anything and Backlash admits he just needs some help.

Was that so hard, fellas? Now we’re all set for a big showdown next post. Got to have a lot of exposition in a comic like this. Got to tell everyone who everyone is. But I assume next issue will move a lot faster. I honestly don’t recall. Everyone in Jim Lee’s studio (And in most of comics) was trying to draw like Jim Lee in this period. I think a lot of people saw Brett Booth as his heir apparent. He was certainly ahead of a lot of his contemporaries. Heads in profile were obviously a problem (Still are!). But, thankfully, just doing your best Jim Lee impression finally went out of style, and that left Booth in a weird position.

Speaking of the edgy 90s, look at this ad:

No sissies here, guys! Only super manly beefcakes posin’ as hard as possible, yeeeeah! So funny. Aaron Wisenfeld was amazing, though. He would abruptly quit comics to become a fine artist, but he was really great at them. More Image action next time.