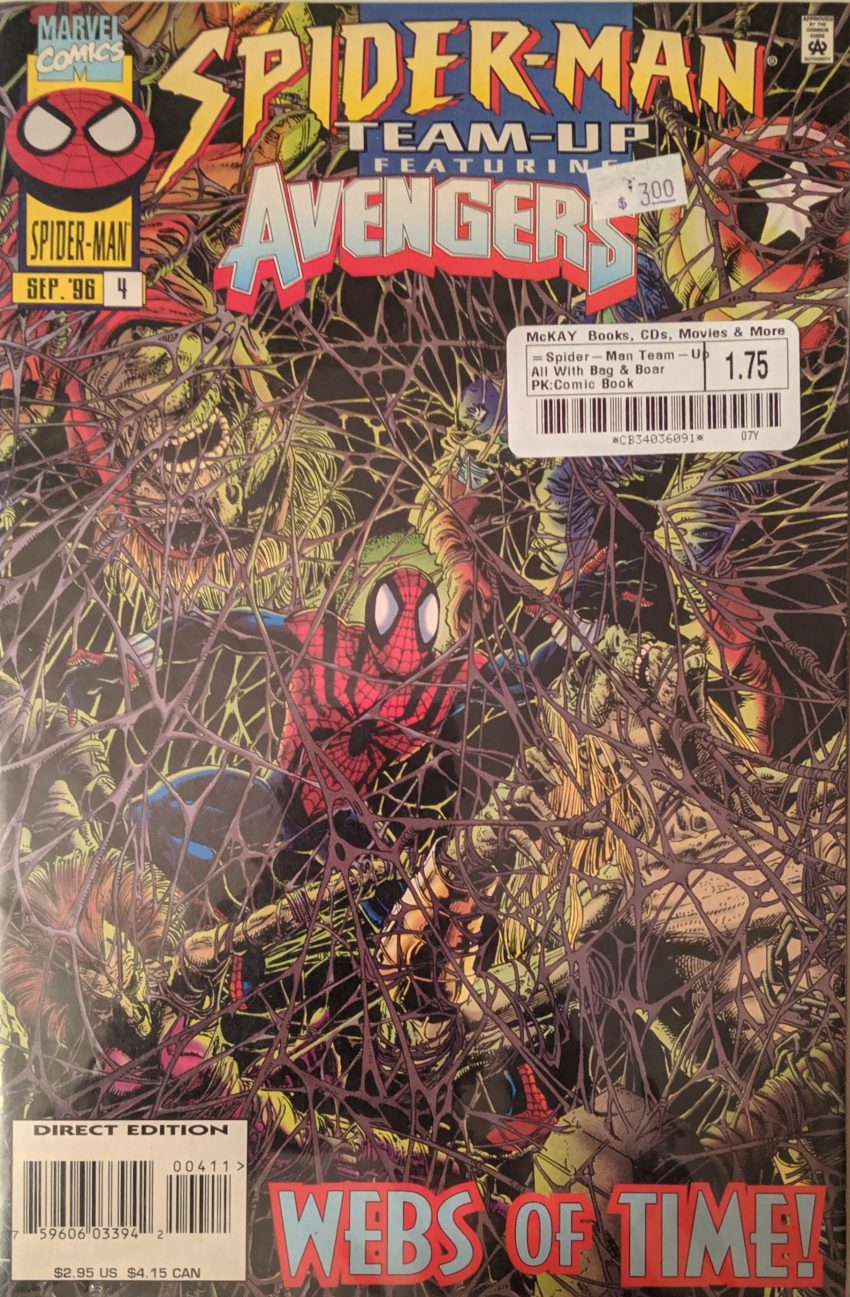 The first issue of this series teamed Spidey with The X-Men, because of course. The 2nd issue’s Silver Surfer story was a bit of a surprise. The FF last time was an obvious choice. Naturally, it’s time for The Avengers. The team team-up trifecta is complete. But it’s 1996, so The Avengers are a disaster. A DISASTER. We shall see. Few people other than George Perez could’ve rendered this busy cover, and guess what, he’s back to write this one, too, supported by entirely too many artists. Pencils by Steve Geiger, Darick Robertson, Dan Jurgens, and Brandon McKinney, with inks by Chris Ivy, Andrew Pepoy, and Tom Palmer, and colors by Tom Smith. We open “once upon a time…” in Mexico, as 2 locals help 2 Americans sneak into an old temple past some armed guards. Not just any temple, though, it’s the Temple of Tirod, last seen way back in Avengers 11 and already providing some clues about what’s going to happen here, I think. The Americans are inexplicably breaking into this place as part of their honeymoon to photograph some ancient writing? What? Then the rumors of a giant spider in the temple seem to prove true, as something bad happens in the darkness. The locals flee as the guards rush toward the sound of the screams.

Aaaaalright. Now it’s “sometime later”… is it the present or what?… at Avengers Mansion. Time to see just how horrible the team is right now. Black Widow and Scarlet Witch are getting ready to go see an art show as Jarvis buzzes in someone at the service entrance. When asked by the ladies, he says it’s “some more of the Stark International security files being delivered.” When Wanda asks why they didn’t just “modem” them (1996!), Jarvis says Tony’s order is that they be “hand delivered — by DARK CONDIMENT.” What, like soy sauce? The ladies nod in understanding. I wish someone would clue ME in. Ok, time to get to it. While Natasha and Wanda have escaped this era mostly unscathed, others have not. We cut to Hawkeye & Iron Man sparring as the Wasp & Giant-Man watch.

Jan is a bug lady, and Tony Stark, after having been revealed to be a brainwashed minion of Kang the Conqueror, has been killed. In response, The Avengers have done the only reasonable thing and gone back in time to bring a 19-year old Tony Stark to the present and put him in the Iron Man armor. I mean, name one other thing they coulda done, really. The universally reviled “Teen Tony” did not last very long, but here he is, learning how to be Iron Man. His suit over loads and lets out a huge burst of energy, leading him to think he’s killed Hawkeye.

They showed him! I guess! Meanwhile, in Queens, a drive-by shooting that has endangered two mothers with small children has drawn the attention of a certain webslinger.

But… not the right webslinger?

Strangeness abounds! We don’t stick around to see what’s up with Spidey or that car, though, it’s time to get uncomfortable!

Oh, awesome, Teen Tony is a horrible person! Iron Man fans had it even worse than I did back then. They replaced my guy with more or less the same thing, only blond. Iron Man readers got… this. The next day, Henry Peter Gyrich, longtime jerky government agent problem for The Avengers and current NSC agent, arrives at a warehouse to examine the bodies of the crooks from last night, snared in a big green web and looking like something out of an Alien movie. Ok. Meanwhile, Thor, who has become a mortal and decided shirts are forbidden, responds to an Avengers distress call on an outdated channel just in time to see Giant Man get thrown out of a warehouse at the New York Harbor.

That’s a lot of hair! Captain America also arrives on the scene as the 3 Avengers chase a pretty normal-seeming, wisecracking, wrong-costume-wearing Spider-Man back into the warehouse Giant Man just exploded out of. At Avengers Mansion, Gyrich explains to the rest of the team that they’ve for half a dozen warehouses full of aging corpses in webs, each one near a recent Spider-Man sighting, and how they have to bring him in.

Yeah, Spider-Man is a “reserve” Avenger. He basically never does anything with them, but he could! Hey, look, it’s the real… well “real”… Spider-Man, finally. This book’s half over. He suits up and goes to visit one of the women the other Spider-Man saved last night, but a TV report tells both of them The Avengers are fighting the other Spidey right now, and when she notices this one’s crappy, different costume, she becomes afraid of him, and he takes off. Back at the Mansion, The Wasp radios in for help, and the rest of the team & Gyrich see an aging Captain America trapped in a web just before The Wasp gets caught, too, and then Spider-Man fills the frame as the camera winks out. How and why a camera was following The Wasp, I can’t say, but the “real” Spidey shows up at that moment. He goes into the warehouse and finds the other him further webbing up all the Avengers. The other him stops in his tracks when he sees our hero.

This is a very confusing issue. So much stuff jammed together. As Ben falls into the whatever, he starts seeing visions from his past all around him before spotting the other him on a floating rock and trying to web him.

Spider-Man has now fallen back to, guess what, the events of Avengers #11, which saw Kang the Conqueror pit The Avengers against a very convincing robot duplicate. All this suddenly working for you?

Now Ben is 8-year old Peter Parker, and a zombie Aunt May appears to taunt him about his dead parents before slapping him repeatedly. Which turns out to be Quicksilver highspeed beating the crap out of him in the real world as he slowly returns to it. As Spidey regains his wits, be breaks free of Quicksilver, but…

While The Avengers are enjoying the thought of murdering Spider-Man (!?!), the evil Spider-Man appears to terrorize Teen Tony’s class at Columbia University.

While whatever that is is going on, The Avengers bring Spidey back to The Mansion, where Black Widow punches out Gyrich for literally no reason when he points out this is a different Spider-Man than the one doing all the crimes and killing and whatnot. It makes no sense at all. While Natasha assaults Gyrich, we go back to The Temple of Tirod…

This is just turning to gibbersh. Back at The Mansion, Spider-Man, still recovering from his beating, remembers that every time Quicksilver hit him, he got a flash of one of the Avengers his duplicate killed, each trapped at some point in their own past, aware but helpless. He also looks in a mirror and discovers that he himself has been aged. Time for some o’ that sweet, sweet exposition.

So, the robot can tell Teen Tony’s in the wrong time, and assumes he’s Kang, ok, why not. Pietro races to Mexico to find the robot has put all the scientists in a web and has Teen Tony with him, suited up, as the robot babbles about how this will usher in “The Age of Kang.” I’m not really understanding how. Spidey & The Avengers are flying to the rescue, but as they  near the spot, both they and their quinjet being to age out of control, and Spider-Man has to save them all with an improbable web net shot out the window. But now, everyone but him & Vision are ancient. But Crystal, being an Inhuman, is still raring to go even at a very old age, so the 3 of them head into the temple. Spidey surmises the robot isn’t aging him simply because it refuses to believe he exists (Sure, why not?).

The robot finally realizes Tony isn’t Kang after Tony zaps him a few times saying he refuses to be Kang’s pawn (Not too bright, this thing), and then the cavalry shows up.

In an epilogue, we see the two Americans break into the temple again, only to find nothing this time. Then Steve Geiger rips off a Jim Lee panel for a Thor drawing and a John Buscema Captain America on the same page…

Maybe it’s the late hour at which I’m reading this, but it seemed like a real chore. Just a ton of info thrown at you over and over. This is the kind of comic people think of when they say continuity is bad. Oh man. What a mess.