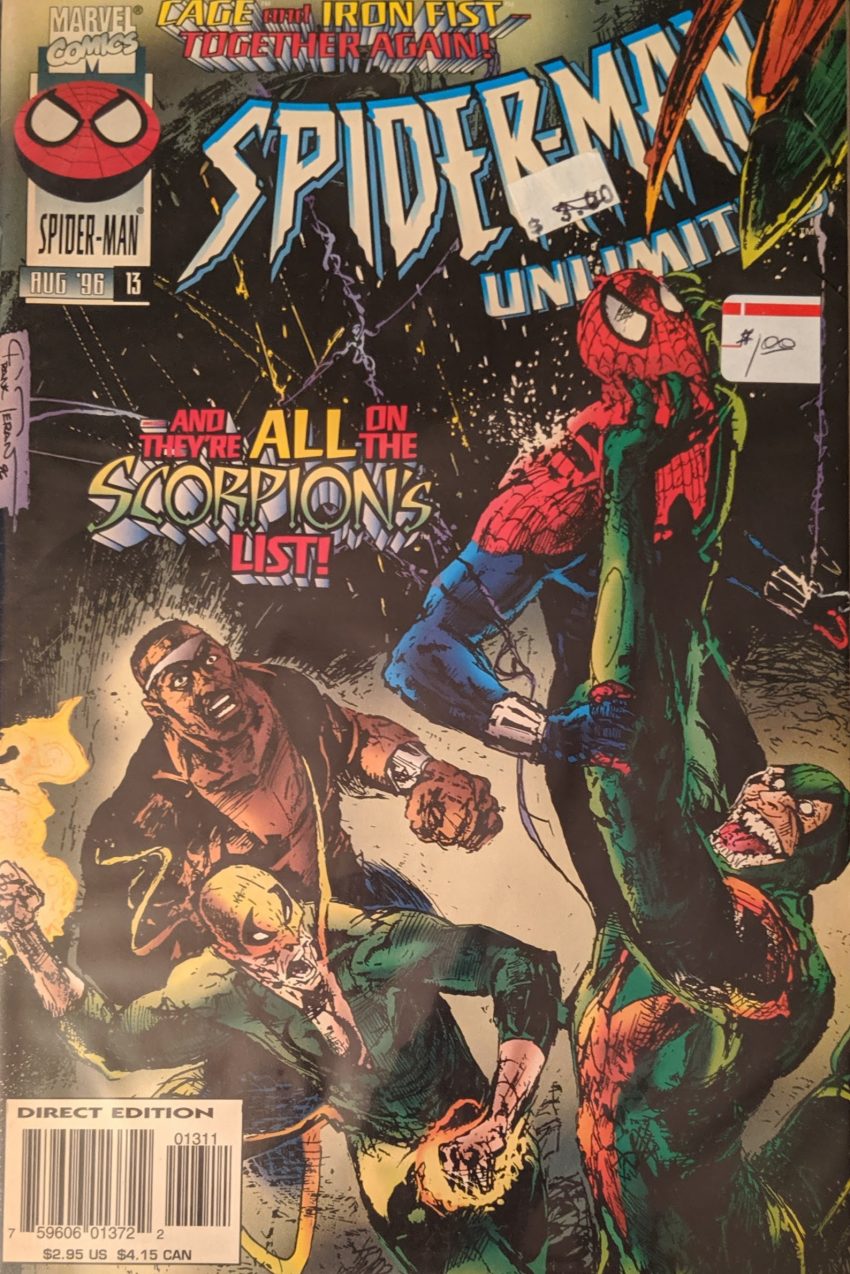 Woof. That cover. Is anything not wrong with it? Illegible type, weird composition, sloppy drawing, muddy color and no background. Sheesh. Another pull from my local flea market. Will it even be worth the dollar I paid? Let’s find out. This issue features a story that takes up nearly all of this book’s double-size running time written by one James Felder (Never heard of him, looks like he did a little editing and even less writing for Marvel in this period), drawn by Joe Bennett, inked by “Emberlin, Milgrom & Montano” (Not sure who that last person is), and colored by Christie Scheele. I’ve a complex history with Joe Bennett. In this era, he’s all-in on the Joe Madureira thing. Copying Joe Mad is as widespread in the late 90s as copying Jim Lee was in the early 90s, it’s tough to escape. I was not a fan of pretty much anyone doing it, and certainly not of Mr. Bennett. By the 2000s, Bennett’s art would be unrecognizable, clean and crisp and looking fantastic in the pages of comics like Captain America & The Falcon, and I totally changed my tune. Then I didn’t really see him on anything for quite a while, and then there he was, with yet another new style that perfectly captured the creepy horror tone of The Immortal Hulk, one of the best Marvel comics of the 2010s. But, unfortunately, this isn’t The Immortal Hulk, or even Captain America & The Falcon, so the comic looks like this:

…Yeah. Really, really 1996. It’s surprising the Spidey line hasn’t fallen prey to this trend yet, give or take a Luke Ross. Jurgens, Bags, Romita, Jr. & Buscema feel like holdovers from another age compared to this. More contemporary art sensibilities are coming, though, for good or for ill (Honestly, bit of both).

Come on, Scorpy, talk like this is SO 1994. I have no idea what’s up with Scorpion in this time. Maybe this is the debut of his new deal, I dunno. Cut to The Daily Bugle, where crank calls are coming in claiming to know what happened to JJJ and Robbie is worried that no one can help them find him. I bet someone can.

We’ve only seen 3 issues of Unlimited so far, and 2 have featured Luke Cage. Seems odd. Luke’s last solo book ended in 1993. We saw him in his status quo from it last time we saw him, living in Chicago, dressing more 90s, bein’ tuff. Seems strange that he’s getting moved back to NY in the least-essential Spider-Man title, but here he is, and he’s back in his goofy 70s costume, too. Robbie has a press conference to announce The Bugle has hired Luke to find JJJ, when Ben Urich gets a phone call from the cops confirming The Scorpion took JJJ. Ben Reilly sees the press conference on TV at work, and away we go. Spidey rushes to JJJ’s wrecked office JUST as Marla Madison shows up to talk to him, saying she knew he would rush here. Uh, ok. She has a note left at her house telling JJJ to back off the Rand/Meachum story. Hey, from last post! Spidey thinks that’s a lead, but then he hears a much more obvious one crawling up the side of the building.

Marla looks like half the age she did last we saw her. She also explicitly told Spider-Man she didn’t show the note to the press or the cops on the previous page, but whatever, I guess. Spidey and Scorpion mix it up, Scorpion managing to tag him with his now very specific tail gag, while Spidey does the ol’ web in the eyes bit. Same ol’ Scorpion story. Then Scorpy gets him again, and reiterates for us that that means Spidey now has 24 hours to live, but that doesn’t stop Scorpion from continuing to try to kill him, forcing a now very messed up Spidey to leap off the building with Marla, both of them barely surviving the trip down to the street. Scorpion takes off while they’re busy, and that’s it for this round.

Of course Iron Fist has a spectacular mullet, it’s 1996! Danny is not in the mood for superheroing, telling Luke they’ve both squandered their power and they’re failures. Luke’s not into that, and wants to know what’s up with the Rand company. Danny says he doesn’t know, he hasn’t got much involvement, but to go ask a Jason Quartermaster, one of his senior supervisors. Let’s do that.

Leanin’ toward a “no” on that “is this comic worth a dollar” question. Luke goes home just in time for Scorpion to show up and offer him $150,000 to drop the Jameson case, so they have to fight. Scorpy can’t sting Luke, but he can beat the crap out of him with his now-more-enhanced-than-ever powers, and he does. He keeps babbling about “Gargan being dead,” but the internet is failing me in trying to figure out why. Anyway…

Aaaalright. Spidey thinks the toxin in his system must be dulling his Spider Sense as they keep on fightin’ for awhile. Then the cops show, and Scorpion thinks he’s been paid to keep a low profile (That has NOT worked out so far!) and flees. Spidey helps Cage up and essentially tells him to butt out, and also, rather casually, that he is dying now. He finally says Cage can go look for an antidote while Spidey looks for JJJ, and they split up. What? Ok. Spidey goes to The Bugle to look for info about The Scorpion (What?) but all the files are gone (What??). Then Marla happens to find him.

This… this thing got weird. I had to take a break there because this comic is super long and also not very good, but I’m back. And so is Cage, now breaking into a lab at Rand, where that Quartermaster guy, now in a full-on supervillain getup, is waiting for him, casually admitting to upgrading Scorpion while attacking him with a “universal solvent” that he claims can burn through even Cage’s superhard skin. The little weirdo has Cage on the ropes when…

Uuuuh, ok! Misty looks completely different than she did earlier in the book, and appears to be dressed as a SHIELD agent for some reason, but ok. She saves Luke, who then knocks the guy into his own vat of solvent, so that’s it for that. Oh, whoever you were, you won’t be missed.

Man this is a mess of a book. It’s interesting, Cage there isn’t much like a Joe Mad drawing at all, but Misty mist as well be traced out of a contemporary X-Men book. And may be, I dunno. Meanwhile, Scorpion has JJJ tied to the very machine that gave him his powers, and recaps their history for him like they don’t already both know it.

Some faces there. People keep randomly whispering in this comic. Well, now’s about the time Spider-Man would show up, and he does. Marla apparently guessed they’d be here. Great stuff, Marla. Scorpion keeps talking about Gargan being dead, but more and more in a way like he didn’t mean it? I dunno, none of this is terribly well written. Fight fight fight, Spidey’s on the ropes.

Sure, why not? Iron Fist and his copous hair spend a lot of time explaining his deal and powers just in case, and after Luke tackles Scorpy through some machinery, Danny shatters his dumb tail.

This book is so choppy and unpleasant.

And getting worse! Scorpion is suddenly as dead as he’s been saying Gargan was the whole time, a weird looking mechanism in his suit having poisoned him for his failure. Spidey vows to find whoever put Scorpion up to this and killed him, and tells Lule & Danny they make a good team.

Then the cops show up and cart away Scorpion’s body, only for his mysterious employer to have him come right back to life, the toxin just making him appear dead, or whatever. Scorpy gets picked up by the people he works for and assured he’ll have revenge. They say “this Rand/Meachum thing may have been a bust, but it was just the prelude.” What… what even was it? What was supposed to have happened here? I am so confused.

Sure, man! Whatever that means! I am very pleased to know James Felder didn’t write many comics! Not worth the dollar!