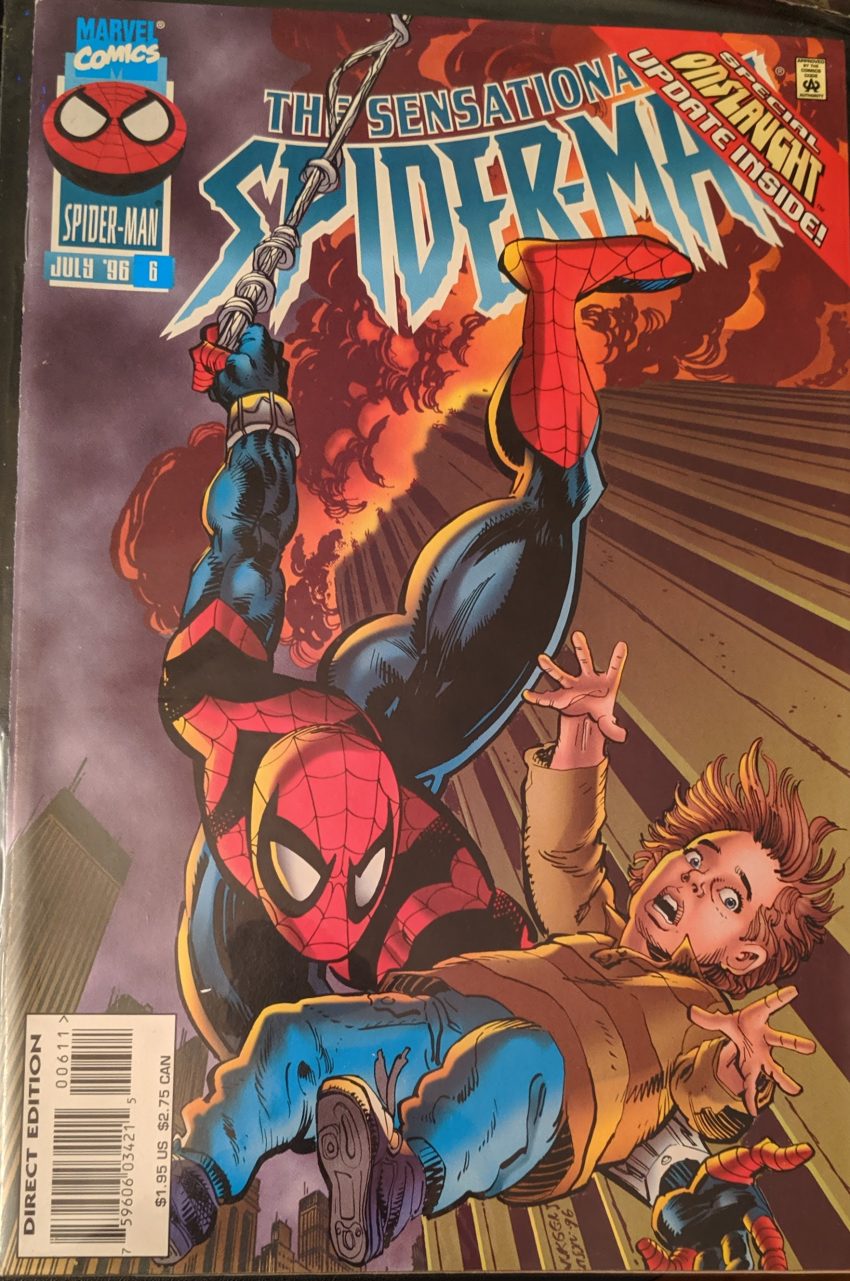 This is Dan Jurgens’ abrupt final issue (Aided and abetted by Klaus Janson and Gregory Wright). In spite of being the one who talked to editorial and got them to decide Peter was the real guy again instead of Ben, he couldn’t hang in there to see it through. As this is his final issue, he decided to make it a weird remake of his first, only following Jessica Carradine this time instead of Ben Reilly. So it has the same giant headshot on the first page, but a different character, a gag he will repeat as we go. Weird choice. Jessica is visiting her father’s grave, just like Ben visited Uncle Ben’s in issue 0. Here’s a thing: I cheated a little back then and didn’t mention he was talking to May & Ben. Figured I’d let her death be a surprise if I could. But now that we’re past it in the previous era, the truth can be told. Anyway, Jessica is talking to her dad about how her life is a mess while recapping how he, ya know, killed Uncle Ben. Sort of.

Obviously, Jessica’s version of events is rather skewed. Wait’ll we get to the time Spidey really did encounter her dad again, it’s… not what she thinks. While she ruminates on that, Ben himself is ruminating on how The Daily Grind was destroyed because of his life as Spider-Man. Who should pass by as he’s watching them put the new sign up (I thought they reopened already?) but our pal, Desiree Winthrop, who says she was relieved to hear he didn’t burn the place down.

Nailed it, I suppose. Feels unnecessarily aggressive. Look at the drink cups in panel one vs. panel three. Whoops? We cut back to Jessica, walking in the rain, still talking to her dad in her head, wishing she knew whether to ruin Ben’s life or not. Then she happens to walk by that Rio place and see Ben & Desiree, and she’s so upset she decides to mail her photo to The Daily Bugle! Inside, Ben continues to read Desiree like a book, but a blazing fire on top of a skyscraper out the window catches his eye, and he has to make a lame excuse to do his thing. That fire is serious, how did he not notice it? The whole top of the building is ablaze. Anyway, Jessica… hears the “Thwipp” as he swings overhead? Really? And follows him.

As he goes in, Jessica is there, horrified that he’s swinging right into the fire. He finds the people, and begins webbing up a big chute for them to escape down. Don’t see that much in this era, but Jurgens’ Spidey has felt pretty 1970s the whole time, so that tracks.

Well, that’s nice. Usually in these types of stories, there’s always an old lady or a kid or a dog still trapped up there, and the hero has to dive back in, and it’s kinda nice that they didn’t… oh, nevermind.

No cliche too cliche! In the blaze, Ben is able to locate the kids, and begins giving them oxygen from the tank, but the roof caves in.

Well, that’s that. We jump ahead some period of time to Jessica, now in a fancy dress, visiting.. Uncle Ben’s grave. With flowers. She’s here to apologize to a ghost for believing he was a bad all these years, and for her dad killing him, and says she needs to put all of this behind her.

It’s the last page of SSM 0, except it was Ben in that one. Like I said, weird choice. Aaaand that’s it for Jessica! We will never see her again. Abrupt as Jurgens’ own departure. She seemed like a terrible idea, but once she was in the book, it seems odd to shuffle her off so quickly. But what isn’t odd in this period, I guess. It might be interesting for someone to bring her back some day. Maybe she’s been inspired to a life of heroism? Not superheroism, just helping people. That’d be fun.