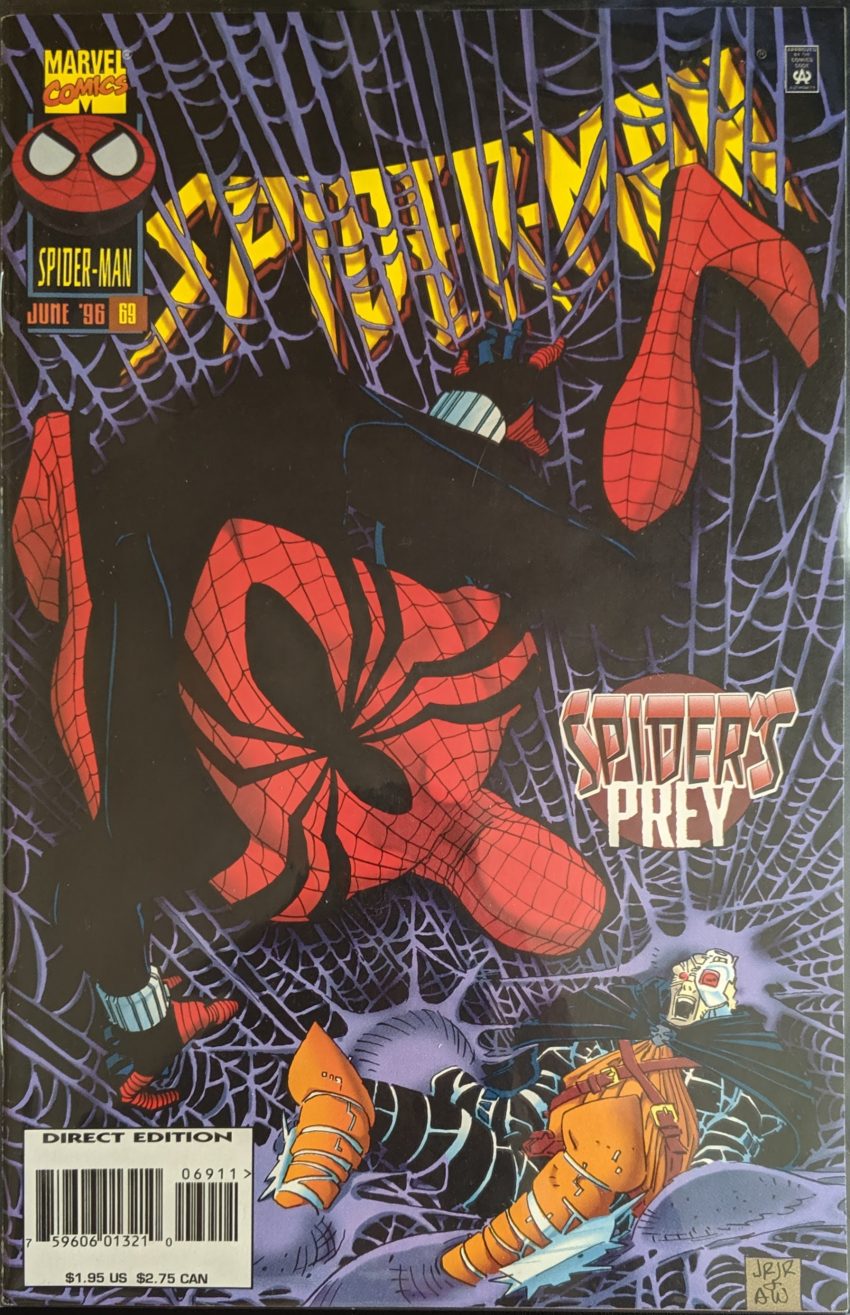 We are back to 1996. Ben Reilly is Spider-Man, Peter & MJ moved to Portland for juuuust a second and are back, Peter lost his powers, Ben & Peter know someone is manipulating them from the shadows. Remember all that? It’s apparently easy to forget, considering how much of this stuff I’d totally blacked out in the previous block from this period. We’re picking back up with with Adjectiveless Spider-Man, and that’s still brought to us by Howard Mackie, John Romita, Jr. Al Williamson and Kevin Tinsley. And we begin with what looks like a production error. The line art layer appears to be missing or underneath the color art on page one:

It actually looks pretty cool that way. Boy, that title lettering. Sheesh. Hobgoblin is looking in cracked mirror as he talks to those lames in “Cell-12” about how disappointed he is with them, and also clearly flying, in spite of being portrayed still using a glider in other books. He continues flying unaided as he just leaves the warehouse they’re gathered in, dropping a pumpkin bomb on the way out to get rid of Cell-12. Oh, lame 90s villains, we hardly knew ye, and yet, we knew ye too well. Meanwhile, in the book’s 2nd difficult to photograph 2-page spread in a row, Spider-Man is shaking a guy down for info about The Hobgoblin. This spread is drawn sideways, though, for an unusual effect.

After the exposition’s out of the way, this guy tells Ben where Hobby’s been hiding out, only he seems to be describing the warehouse that just got blown up, so that won’t be much help. Meanwhile:

That is simply delightful.

Who is this mystery man? I have no idea! No memory of this. Elsewhere, Spider-Man drops by the reconstruction of The Daily Grind to tell Shirley that he’s sorry this happened, that Ben Reilly guy totally didn’t do it, and he’s gonna find the real perpetrators. Must be nice to be able to be your own character witness. While that’s happening, Pete & MJ get to The Bugle.

What on Earth is Ellis eating? “Sorry, guys, just getting my nutrition block in while I can!” Is this a “we realize The Bugle hasn’t actually been in the books for like half a year, so here’s the cast” kinda thing? Bit of a mixed bag, especially since I believe this is Ann Macintosh’s 3rd and final appearance. Classic Ann!

It is kinda fun for Spider-Man and Peter Parker to interact out in the open, I’ll admit. Really helps the secret identity for the future. Meanwhile, Hobgoblin’s right where that snitch said he would be. I guess the warehouse he blew up earlier was… I dunno, a spare? How many abandoned warehouses could there possibly be in Manhattan? If you believed superhero comics, there would have to be 3 on every block. Hobby is in a contemplative mood, thinking aloud that he doesn’t know why he does what he does. That he has no home, no friends, his ex-wife hates him and his son is afraid of him (Gee, why was that again?). He sets his own couch on fire in a fit of rage when Gaunt shows up.

So… what, the Goblin mask grafted to his face now or something? Can Jason Macendale go 5 minutes without making an incredibly stupid, life-altering decision?

The whirlwind behind the scenes in this era is so insane. Last block, we ended on the story that was supposed to be the end of the clone saga, which would reveal Gaunt to be a resurrected Harry Osborn, and the one behind everything. Now he’s not, and he works for someone else. Who is he? Who does he work for? Not even the people making the comics knew, at this point. I can’t imagine those working conditions.

Spidey has a point, but Hobby’s not in the mood, so it’s fight, fight, fight… web, web, web… pumpkin bomb, pumpkin bomb for a couple of pages, and then he tells him everything, anyway. Sort of. He tells him what he claims to be the truth, at least.

What an insanely risky plan! Would Hobgoblin coming for both Peter & Ben not indicate he or someone else knew their secrets? Would having Urich there recording not be a massive risk? Hey, what do I know? Sure lucky that all worked out!

Wherein we learn Devon is dumb.

This page really looks like JRJR or Williamson or both were rushing through it. Weird faces. But, there it is, 6 whole issues after leaving the book FOREVER (I guess 8 if you count the 2-month Scarlet Spider detour), and after being back for 2 months, Peter & MJ are here to stay. Even as just a random kid, totally oblivious to the behind the scenes chaos, I could feel the story changing gears in moments like this. Going to the trouble of packing Peter & MJ off to a happy ending, with their “last” appearance being a miniseries called “The Final Adventure,” even (We’ll see it later)… and then they come back. The last issue of The Final Adventure was just 2 months ago… the very same month Pete & MJ reappeared in Spider-Man 66. You didn’t have to have insider knowledge to see things going off the rails.