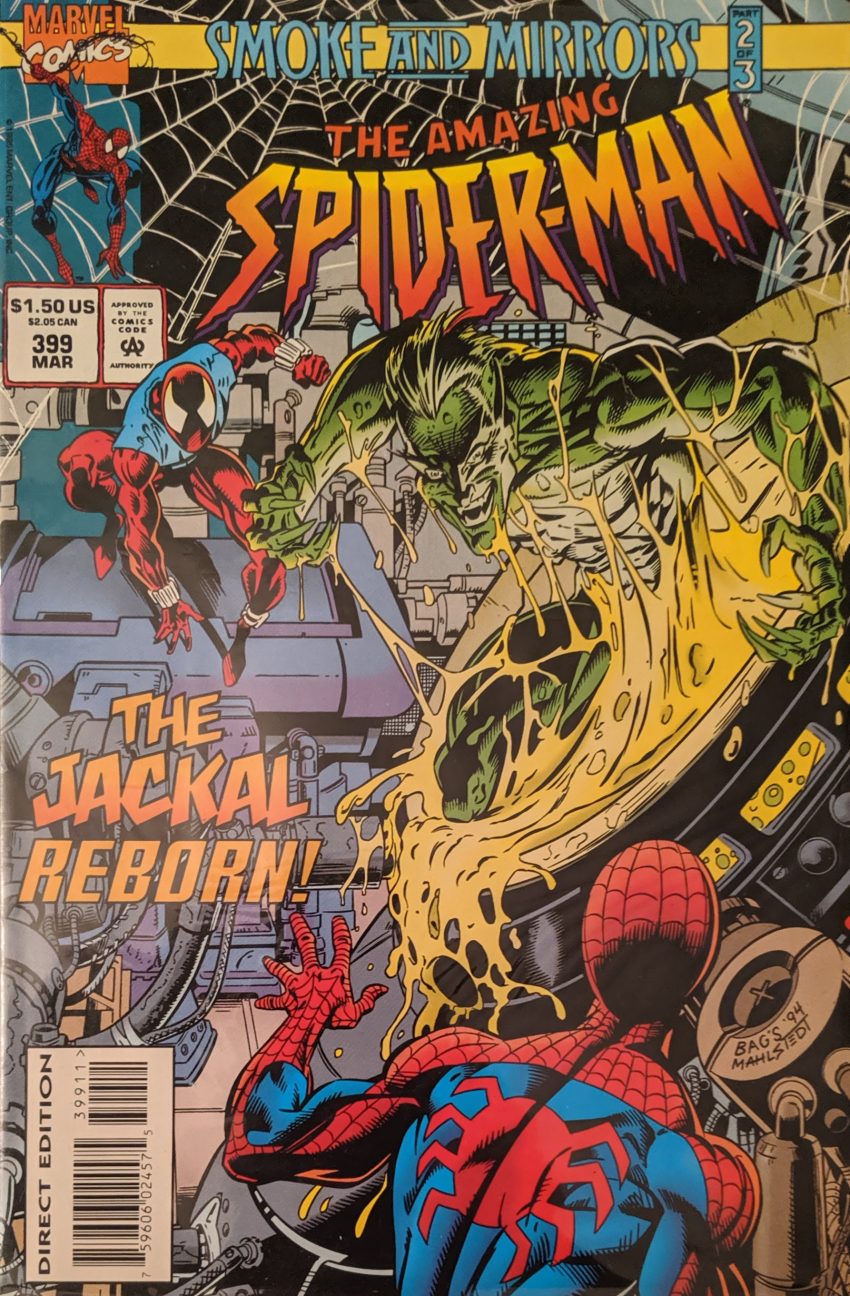 Oh boy! That doesn’t look good! I don’t mean that in like a “this looks bad for our hero” way, I mean that in a “this looks bad for me” way. This was right about the time clone fever began to wear off for me. When… well, let me not get ahead of myself. So, Ben Reilly is unconscious in the snow in The Catskills all alone and left to die. But of course, you’re never alone in a Spider-Man comic from 1994, because Kaine is there.

See where there is only one set of footprints? That’s where Kaine walked up next to your body to stare at you all creepy-like. But see where there are two sets of footprints? That’s where the beloved 90s move of “all the mystery tough guys know each other” was happening. From Cable and Gambit and Deadpool and everyone else already knowing Wolverine when first introduced on down to this, it’s the go-to. It’s just far less effective when it’s “random white guy from awhile ago and flavor-of-the-week” talking. At any rate, Kaine is spooked, thinking if Scrier is here, there’s more going on than he realized. He senses someone else approaching and does his disappearing act. It’s Spider-Man, of course, come to help his baby brother.

CHOOSH! Boy there’s a lot of ridiculous stuff happening really fast. Inside the door is a big high tech hallway, with the little Jack guy inside. Ben just immediately punches him in the face, which is pretty funny, though maybe not on purpose. The door closes behind them, and they’re forced to follow “Jack” into a big crazy room full of tubes and pods and stuff, Jack saying “the boss” should be “coming down out of his canisters” soon. Then the spiders are attacked by the big guy from last issue, shouting at no one in particular to make the pain stop.

/sigh. Just a few years prior, Gerry Conway was like “That clone stuff, that was a mistake, right? That was too much. Let’s try to get rid of it.” Spidey ‘94: “No no, sir, that wasn’t nearly enough!” The Jackal immediately whups on both spiders, marveling at his own prowess, and then orders Jack to bring him some clothes. Now, if you’re thinking “It’s the 90s, that means The Jackal will probably wear a trench coat,” well give yourself a pat on the back!

The retcons are coming fast & furious now. Jackal explains how he set all this up, how the big guy and the little guy are failed Peter Parker clones, how he had to try over and over to get one right. By now, Kaine has somehow snuck in so he can do what he does and just watch.

I think it’s worth noting that, even as Peter flies into a rage, it still doesn’t feel like it did until just recently. The whiplash change from raging douche who wants to die to regular ol’ Spider-Man being pushed too far is so insane to me. Everyone was so willing to just close that chapter with no consequences. I still don’t even understand why Peter suddenly decided to live again. Anyway, let’s get to the inevitable ending…

Just keep reminding yourself that we get to look at Stan & Johnny comics again in a few months. That’s what I’m doing.