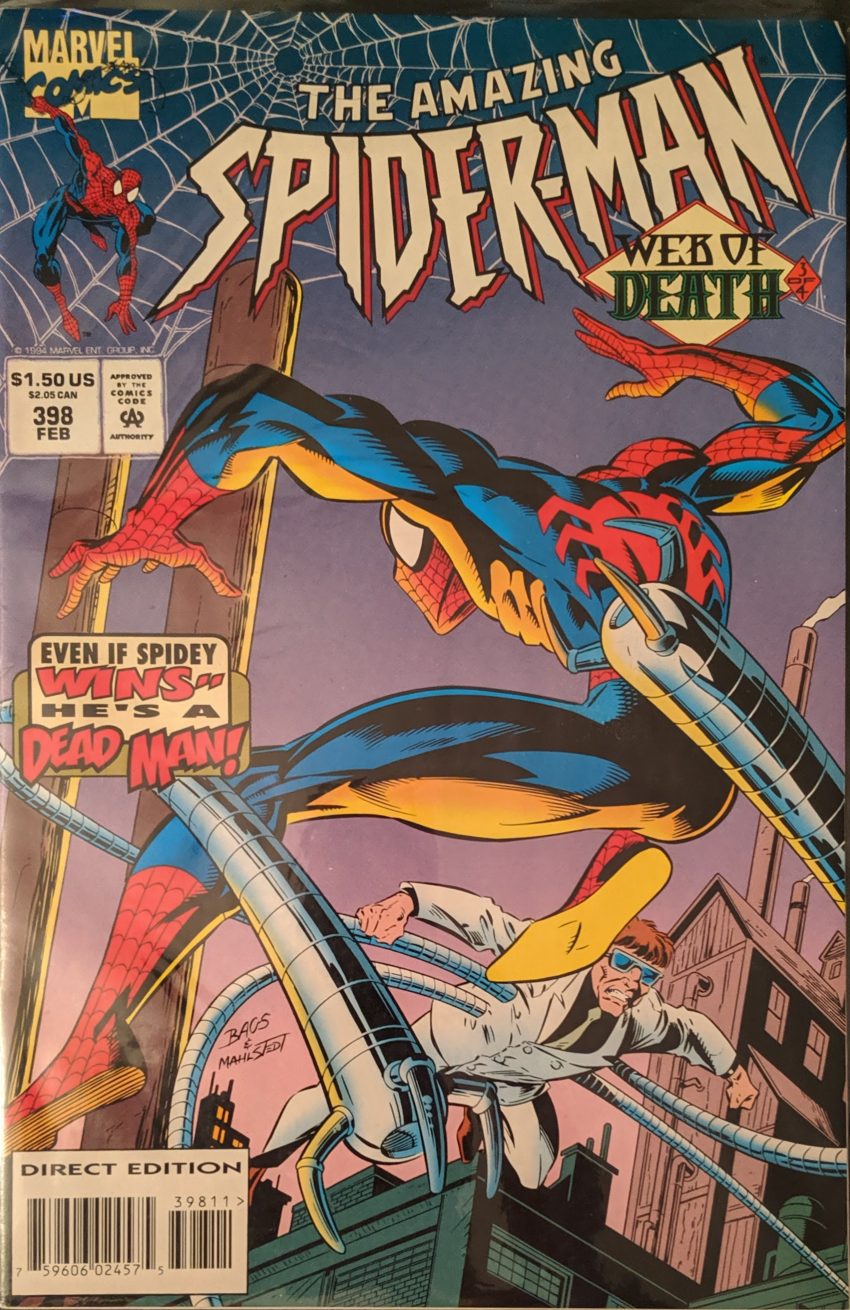 Back over to the real Spider-Man now, who, as Doc Ock stands in an alley across the street from his home thinking maudlin JM DeMatteis things, reacts to MJ’s pregnancy news with a totally limp fake out:

This should have at least been page 1 instead of 2, so you’d have to turn the page to see the following:

Peter’s so excited it somehow changed the color of MJ’s shirt! Sometimes I feel bad for being so hard on the comics in this era, but look: this is garbage. Peter has spent almost a year of comics being a stupid baby, refusing to be there for his dying Aunt May, refusing to treat his wife with anything like common respect, refusing to take any responsibility for his own actions, being all emo and stupid and “I am the spider” and “I want to die.” And… then Mary Jane comes home, with no reason to believe any of that has changed, to tell him she’s pregnant. And lucky for her, he’s stopped being stupid? What impeccable timing. All’s forgiven! All the childish behavior, leaving her to care for his Aunt while he’s being a child, letting Typhoid destroy their home, destroying it himself soon after… Water under the bridge! Bullshit. Mary Jane’s personality and agency have vanished in this moment. Ugh. Ugh! Anyway. MJ notices Peter is feverish, but he’s decided not to tell her he’s dying now. What, would that spoil the moment? By all means, don’t treat her like an adult, I’m sure dying will just go away on its own. He goes to take a shower, planning to go see May after (Just like that! All’s forgiven!), and the second he’s out of the room, MJ start’s worrying his radioactive blood will kill their child. What, you thought this comic might get fun again or something?

“Hey, Aunt May, I know I’ve left you here to die for awhile, but I’m in a better mood now, so I demand you wake up!” Also: While Peter is certain she and others can hear what people say while in a coma, he better hope not, because Ben Reilly’s been here telling her all about him being a clone and Spider-Man stuff. But he’s right, as the comatose Aunt May gets a page to talk about how she’s in a place of warmth and light and memory, and has to decide whether to come back out of it or not. Ok. Pete & MJ then go out to fancy dinner, back to normal, until Peter has a dizzy spell and drops his drink. A guy comes over to tell the staff to get him some water, and that maybe MJ should take her husband home. That guy appears to be Jacob Raven. MJ mentions they’ve never seen him here before.

“How did you know my name? Me, a famous former model and TV actress?” Spidey attacks Ock with all the rage and violence he’s been about these last several months. Ock tries to explain he wants to help him, but Spidey wants to fight. But Ock has always had an advantage in their fights and Spider-Man is sick, so he just pins him to a wall to make him listen.

Corny. Not the first time they’ve put aside their differences. Not the weirdest time. Meanwhile, Stunner is out running around in Central Park, throwing trees around and enjoying her powers, when a voice tells her to stay away from Doc Ock and vanishes. Kaine, of course. That guy is everywhere. He must spend a fortune on cab fare. Back at the lab, Otto & Peter think they have the antidote ready, but Peter is obviously afraid to drink something made by his worst enemy. Ock sympathizes, and threatens to just throw it out, forcing Peter to make the choice, and saying he wishes him all the best as Peter drinks it down.

As Ock stands over Peter’s unconscious form, Peter has an out-of-body experience, flying up into the sky with a stream of souls. Not all of them unfamiliar.

Love ghost Nick still having a smoke after dying of lung cancer.

Is this the weirdest moment in Spider-Man comic history? It’s sure up there. They really wanted you to buy the idea that Peter was dying, to be replaced by Ben. Riiiiight after being told he was going to be a dad? How cruel. And, of course, meanwhile, the real plan (At this time) was to reveal he was the clone and shuffle him off to live happily ever after so they could have a single Spider-Man again. That’s the only reason MJ was allowed to be pregnant. Why the unconvincing ruse? I can tell you I sure didn’t fall for it as an impressionable youth. Not a bit.

Pretty much every creator I’ve seen talk about this after the fact has said they only planned for the clone story to last 4-6 months. That would’ve been a lot cleaner than the 3 years it dragged on. But if you count the 4 months building up to the Power & Responsibility crossover (And Ben appeared a lot in those months, albeit it as a mystery figure, so why wouldn’t you?), then this is month 8 already. I guess we’ll never know what they really planned to do.