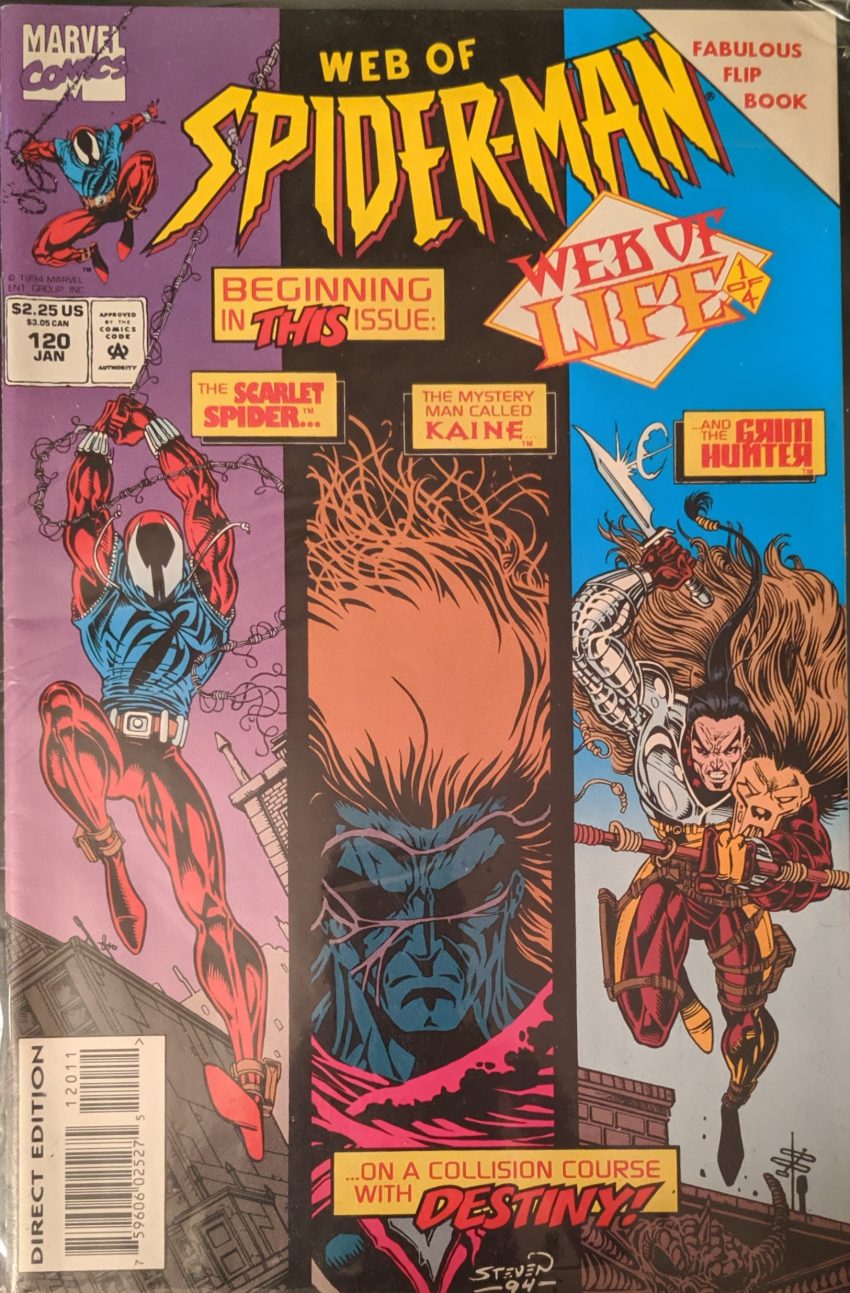 Ah, the rare triptych comic book cover. We open with a familiar face:

Not dressing as fancy as he used to. Ben says he heard Tombstone broke out of jail last night, and so he’s got to put him down. Turns out they’re fighting on top of an armored car, and Tomby punches through the roof to knock out the driver and send it careening out of control.

Tombstone last appeared in a story I haven’t read yet called “The Death of Tombstone,” so it’s surprising to see him out and about. Not for long, though, because after Ben stops the truck, he uproots a lamppost and knocks Tombstone out with a big swing. As onlookers cheer the Scarlet Spider as a hero and a watching Kaine thinks “soon,” we leave to go check in with Vladimir Kravinoff.

That footnote felt unnecessary, but ok. Vlad does what he does, swearing to his dead dad to kill Spider-Man and throwing some knives into pictures of Spider-Man to prove he’s cool. Like father, like son. He’s gonna have to settle for off-brand, though. Speaking of whom…

Would real reporters be acting like this? I’m not sure I’ve ever known a reporter. Ben takes down all the lames without issue, as he should, and takes off, Ken Ellis badgering him for info as he does. He assumes Spider-Man is off relaxing with MJ instead of doing all this (Does he not remember the guy being crazed and awful?), while the book switches narrators mid-page to Kaine thinking that as long as Aunt May’s in the hospital…

(So many big full-figure pages in this issue. And comics in general in this era) Look at this goofus. That’s supposed to be a mask. How does the mouth work? Seems uncomfortable. That sudden 3rd person narration is terrible. Hang on, though, he’s having one of his dumb visions:

Uh-oh. I guess. Did anyone believe MJ could actually die? The line between the Ben and Peter books continues to blur as we check in with Mary Jane, saying goodbye to her sister and the airport, ready to head home to her terrible husband who refuses to live his life, but she doesn’t seem to see it that way. Gayle says MJ is so happy she’s glowing, and then we go back to New York.

So lame. The Grim Hunter has tracked Ben’s scent to the aircraft carrier from earlier, and kills a bunch of soldiers there for no reason before continuing on, thinking he’s hunting Spider-Man. But the guy he’s actually after is busy.

Ben is constantly internal monologuing about how he doesn’t want to interfere in Peter’s life. Step 1 in not interfering with Peter’s life: Try to put the moves on his first girlfriend? Um… what’s step 2? Love Kavanagh’s little “Y’all remember Archer Bryce? Anybody want to see more of him? No? Ok…” Anyway, Grim Hunter shows up at Betty’s, but Ben’s already gone, so he takes off. For his part, Ben swings away thinking that, because of that romantic tension with the real Peter’s old flame which could never lead to anything, “It’s good to be alive again.” But Vlad’s right on his tail, so maybe not for long. A lot of balls in the air in this book right now. We’ll see how that develops in a bit. First, it’s back to The Amazing Spider-Mope and his death sentence.

The flipbook mentioned on the cover is an excerpt from a Spider-Man prose novel. Something to do with Morbius. I dunno, not going to bother reading it.