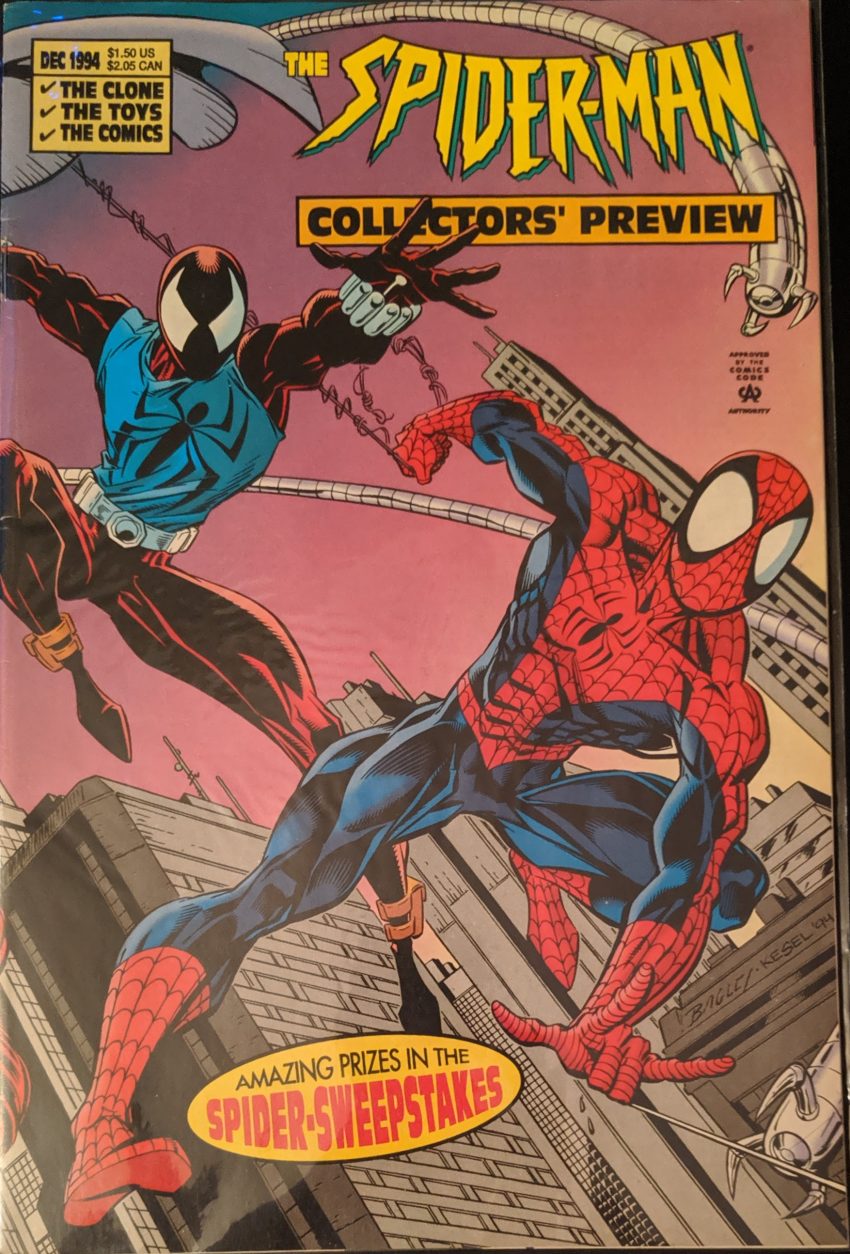 Now that we’ve seen the new status quo, a slight detour. It’s not really a comic book, more like a magazine to get you hyped for all things Spidey popping off in ‘95. “THE CLONE, THE TOYS, THE COMICS” feels rather too much like an accurate list of Marvel’s priorities when it comes to Spider-Man at this time. Look at all the features:

It is so funny to read that editorial over there by Steve Saffel, whoever that is, essentially going, “Whoa! What they’re doing to Spider-Man sucks and the old clone stuff sucked too! I mean, uh, get excited!” The first section of the magazine shows off several genuinely hideous designs for what would be Ben Reilly’s Scarlet Spider costume. Tom Lyle threw in 6 designs, then they had Mark Bagley take a run at it before going back and tweaking one of Lyle’s. But, like, look at this stuff…

The Scarlet Spider is stupid and his costume is terrible, but all the ones they didn’t go with are actually worse. Also interesting to note that one of Bags’ designs is essentially Ben’s Spider-Man costume down there, they just didn’t need it yet. This is followed by a 1-page Fred Hembeck cartoon. Fred Hembeck did comedy stuff in and around Marvel Comics a lot in the 80s and 90s, and to be completely honest, not generally a fan. I did get a kick out of the Fred Hembeck Destroys the Marvel Universe one-shot. Maybe I should cover that some day.  Anyway, after that, there’s an interview with JM DeMatteis & Mark Bagley about the future of ASM. All the creative teams have one. A lot of it is a “we’re joking, but maybe not really” bunch of DeMatteis and Bagley talking about whose role is more important in crafting the story.

It’s kinda awkward. Then there’s 2 pages about Judas Traveller that begins with what is alleged to be a quote from Traveller’s journal wherein he quotes Martin Luther. Haha, ok. It’s DeMatteis explaining the character and his deal, citing Dostoevsky as an influence and talking about how his guy is hundreds of years old, super mysterious and, like, totally even scarier than big villains like Magneto. Sheesh. Not only is this all very silly, but editorial would eventually change Traveller’s whole deal once DeMatteis was gone, so whatever he thinks the character is isn’t who he’ll wind up being. Comics! This is followed by an interview with Editor-in-Chief Tom Defalco and Spidey editor Danny Fingroth on where all this is going.

Those “supposed discrepancies” will not be explained in anything like a satisfactory way, dear reader. They go on to straight up spoil some things and tease that no less than 3 characters will die by ASM 400, and a bunch of other hype-generating stuff. Fingroth has the unmitigated hubris to say an upcoming story will “definitely be the very last Spider-Man/Dr. Octopus story.” Mm hm. What nonsense. This is followed by a “Countdown to #400,” where they just tell you what’s going to happen in every comic. Pretty literally, including spoiling that Doc Ock story. Great stuff! Great stuff. Next, a chat with Defalco & Sal Buscema about TAC. Their interview is very jovial and collegiate, and makes it clear how much they both really love Spider-Man, if their already long histories with the character didn’t. Then there’s a bit talking about Spidey villains which begins with this terrible nonsense:

“Maybe Spidey might kill people, bro, I don’t know, it’s the 90s!!” Ugh. Fingroth goes on to talk about a few key villains and how they might find their way into the books as they stand. Next up is an interview with Howard Mackie & Tom Lyle, who talk about how much they enjoy working together and describe a pretty old school “Marvel Method” working relationship. Also, Tom Lyle is rocking a mullet to make the Peter Parker of this era green with envy:

Woof. Then a spread hocking various miniseries and trades, then an excerpt from one of a few Spider-Man novels published at this time. Then Terry Kavanagh and Steve Butler get their interview. They enjoy working together, you’ll be shocked to hear. Then a feature on Spider-Man 2099 (Which may or may not be something this blog covers some day? I’m not sure), then the then-upcoming cartoon gets several pages. That’s followed by a truly hilarious page about how awesome James Cameron’s Spider-Man movie is going to be. That worked out. Finally, 3 pages on the toys coming out to support the cartoon, including this picture:

Avi Arad would end up being in charge of Marvel when it merged with ToyBiz, and as an executive producer on the Sam Raimi Spider-Man movies, he would force Venom into the already overstuffed Spider-Man 3, ruining it. Great stuff, Avi! And that’s it for this thing. I recall being very excited to read it back in my youth. Not necessarily happy to read its revelations, but as I mentioned in the last 90s block, there was an undeniable buzz around the ridiculous nonsense these guys were doing in the Spider-titles. As a superfan, I could only watch nervously as things got progressively worse.