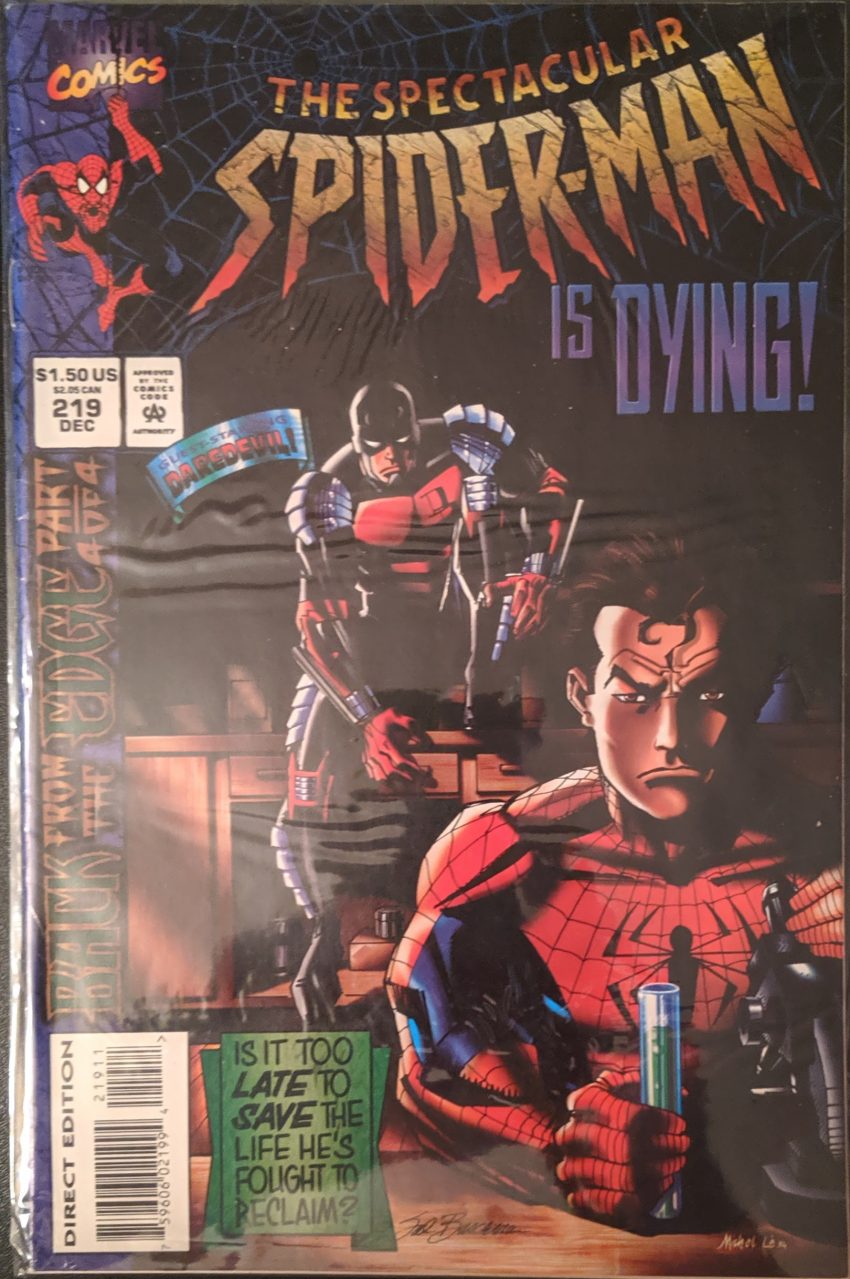 WHOA that cover is dark! That can’t be on purpose. Good grief. When has he “fought to reclaim” his life here? He was just asking Daredevil how to kill his Peter Parker self off for good. Real healthy. Scott Hanna tags in on inks this month. We open on Spider-Man hallucinating from the drug he got hit with as Daredevil hovers over him. Spidey snaps out of it long enough to point out The Owl flying over head.

If DD had to go higher, why did he dive? At any rate, Spider-Man manages to web the birds, and then gets a tracer on Owl’s foot for good measure, but all the while he thinks about how if what The Owl said is true, he’s as good as dead. Meanwhile, in Pittsburgh, Mary Jane works up the courage to knock on the door of a run down motel room, and her father answers, looking about 40 years older than he did in ASM 292? He looks ancient. Why’s he so old? Maybe we’ll be told, but for now, it’s back to the winged bad guys. Vulture tells The Owl he’s so sure he’ll come around on his ridiculous plan that he’s taken the liberty of starting to wipe out The Owl’s past first.

I don’t care about The Owl. Am I supposed to? He’s not even a Spider-Man villain, why is so much of this arc about his internal struggle? While he rushes off, Spider-Man takes DD and the webbed up birds to his apartment, where he analyzes a blood sample and confirms he is, in fact, dying, so he better go find and antidote. Then the Owl watches his old business partner die, choosing the evil side or whatever, and then we head back to Pittsburgh.

You can really see Scott Hanna in these pages. This, to me, is the most interesting plot in the story. Spider-Man’s dying, nothing new. Spider-Man and DD are all EDGY and it’s dumb. The villain plot is dumber. But this is Tom Defalco getting to have MJ confront her dad after coming up with this backstory in the 80s, and that’s interesting to me. Back in New York, Spider-Man is honing in on his tracer as The Owl returns to the hideout, apparently onboard for all the murderin’, and when he lands, he accidentally crushes the spider tracer. So now the heroes have no way of locating him. But they’re pretty close, and DD has his own methods.

This is feeling more and more like a traditional Spidey/DD team-up, really. As usual, the grim-dark crap is way more toned down outside of DeMatteis’ book. Pittsburgh:

Iiiiiiii don’t know. Second chances are cool, but this is his 3rd chance, and his 2nd chance involved putting his daughter in prison for something he did, so… I dunno. But reconciliation is good for you, I guess, and he looks like he’s gonna kick off any day now, so good for MJ for being the bigger person. This comic is almost over and probably ought to have a fight scene, so the fellas bust into the bird guys’ lair.

That’ll teach him. Looks like Buscema wanted Vulture to be yelling at The Owl, but DeZago didn’t pick up on it. In his weakened state, Spider-Man only takes care of three of the birds, allowing 2 to fly off, still poisoned. He swings out and webs one, but the other gets too far away… until The Owl comes and kills it.

Of course not, it’s 1994! In the letter column, a dude has deduced that Peter is the clone and Ben is the real thing because Ben has a class ring and Peter doesn’t. Airtight! Every friggin comic this block so far has had this stupid subscription card stapled in, making them harder to read and to photograph. I hope that’s done. Next time: something different.