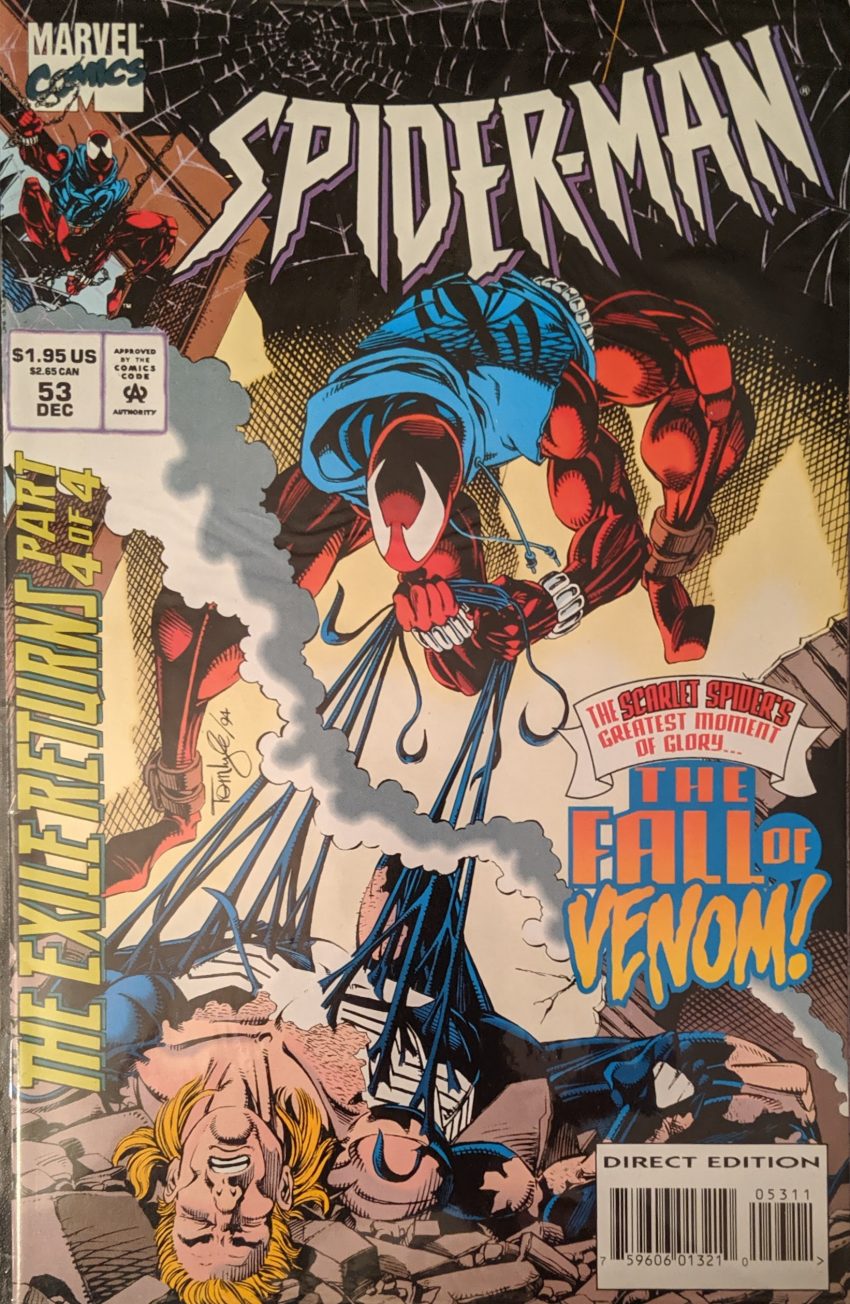 “The best thing that’s happened to this guy in the TWO MONTHS he’s been a character!” What an achievement. Behold the glory of Eddie Brock’s mullet! Peter had a shaggy head of hair for awhile, but Eddie has fully embraced the hockey hair in a big way! Let’s see how this goes. We begin with Ben continuing to take any opportunity to think he’s not a real person and deserves to die, because 90s.

Really bad type treatment on that title. GATHERING a bunch of other text oh, this is here STORMS. As Ben and Venom take turns recapping how we got here over two more splash pages in a row (!!!), Venom says Ben was trying to save Scream from dying by his/their hands. And he previously said he wanted to kill all symbiotes. But when he attacked her last issue, he made some crack about putting her in a padded cell. Now it’s kill time again. Pick a goal, Venom! Ben decides he can’t die because Aunt May didn’t raise him that way. Then there’s this bit on the 3rd splash page:

Yeah, see, they decided that Ben refusing to let Venom go would show you he’s a better person than Peter. Ugh. Page 4? Splash page. This is really over the top. Ben throws Venom into an elecronic billboard, zapping him a bit and saying he’s gonna put Venom away for good “or die trying.” Go for it, buddy! We cut away to JJJ telling a late working Ken Ellis not to let the story consume him, to which Ellis responds, “Yeah… RIGHT!” Very professional. Then it’s back to the fight.

Huh. If I ever considered this, I’ve forgotten about it. Venom famously doesn’t set off Spider-Man’s danger sense because they used to be bonded. But Ben doesn’t have that past, so he’s warned when Venom attacks. That’s actually a nice little bit. Ben buys himself some time by cocooning Venom in his impact webbing, a whole bunch of it. Then there’s yet another splash page as we cut to The Grim Hunter.

Place yer bets on that one. Back at the fight, Ben just kinda waits for Venom to break out, taking the chance to recover a little, thinking he still can’t believe Peter would make a deal with such a monster. In the web, Venom internal monologues that Ben is trying to make him out to be the villain, like they all do, so he’s gotta kill him (Seems kinda villain-y to me!). Then there’s this:

JACOB RAVEN. Haha, ok. Back at the fight, Venom tears loose, and then he tackles Ben off the roof in yet another splash page. Aggressively 90s. Then there’s yet another cutaway to some new players…

Who is that? I have no memory of this. Back to the fight yet again, and as it goes on, Kaine (A mystery man who is obviously Kaine) watches from a rooftop, hoping Ben will lose. Instead, though, he shoots his impact webbing into Venom’s mouth.

Uuuhhh… Where did he read how Venom’s costume works? How does shooting it into the weird mouth the symbiote manifests put it “between the costume and the man within?” And I forgot all about the “stinger,” which shoots out of the same place as the impact webbing. How’s he choosing which comes out? Telekinesis? And then what? It gave Eddie a little tap on the forehead? It’s like Tarantula’s boot spikes, only a lil’ tap. Ben starts wailing on Venom as Kaine narrates that he was always the lucky one.

So spooky. So mysterious. So dumb. Eddie Brock is down, but the symbiote isn’t, popping up to try to bond with Ben, sensing something familiar about him. But Ben rejects it, and in its weakened state, it falls down, too. Soon, Guardsmen from The Vault are here to cart Eddie & the symbiote away, one of them saying Ben “has succeeded where others failed.”

Ben sure goes from “I deserve to die!” to “I deserve to live!” pretty often. And now he’s defeated what was considered one of Spider-Man’s most dangerous enemies, establishing his bona fides. I don’t remember mullet guy up there. I do know the deal with “Detective RAVEN.” We’ll see it all soon enough. First, let’s go check in on our dying star in TAC.