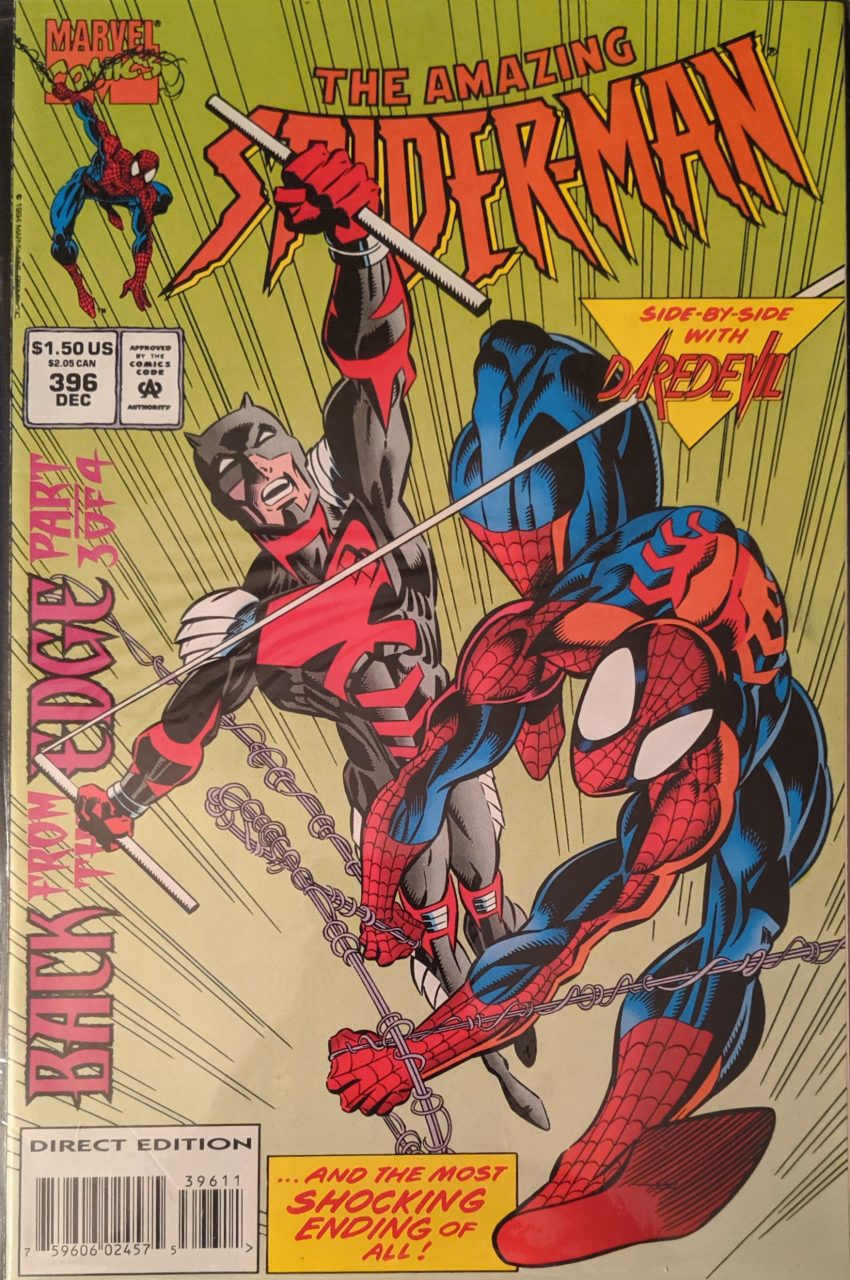 The most shocking ending of all! Didn’t a clone of Spider-Man show up recently? You’re gonna top that? Ok. Look, Daredevil is here, wearing his worst costume by a mile! If you weren’t reading comics in this era, you would probably be surprised how bad things are. We discussed DD faking his own death. Spider-Man is an emo now. Captain America is dying, poisoned by the Super Soldier Serum. Tony Stark is “dead,” or maybe just came back by now? But in a year, he’ll be revealed to be the mind controlled puppet of Kang the Conqueror, murder some people, get killed himself, and then The Avengers will go back in time and bring a teenage Tony Stark to the present to be the new Iron Man. Really! I think this is when Hulk’s wife died from gamma poisoning. The Avengers went through a debacle called “The Crossing” that messed them up all up and turned The Wasp into an actual mutant wasp-lady, among other things. Asgard was destroyed and everyone in it seemingly died and Thor had no idea what happened, and I think he lost all his powers for awhile. Reed Richards “died,” The Thing got all scarred by Wolverine, Johnny Storm’s wife was revealed to be a Skrull. In X-Men, Colossus’s whole family got killed and Professor X turned Magneto into a vegetable after he pulled all the Adamantium out of Wolverine, among other things. The West Coast Avengers were rechristened FORCE WORKS because they’re TUFF now, ok??? Punisher almost got killed and got plastic surgery to make him look like a black guy as a disguise, now THAT was insane. Over at DC, Superman was dead, Batman got paralized, Wonder Woman lost her title to Artemis, Green Arrow was dead, Aquaman got his hand chewed off by piranhas, Green Lantern went crazy and murdered an entire American city. And so on! Comics in the 90s were a nightmare from which there was no waking!

We open on Daredevil doing what he does best: beating the blue hell out of some dudes hoping that will make them tell him where The Owl is. This has been his thing since Miller in the 80s, but if you think it’s not ramped up in the super aggressive angry 90s, well, you’ll be very sad. After he gets done beating up some hoods in an alley, he tells someone off-panel they can come out now. That they’ve been following him for 3 days, and no one can do that without him noticing. Guess who?

A shame we’ll probably never get to see this moment on the big screen, right guys? “I’m dead!” “No, I’m dead!” “I’m sad!” “Way sadder, bro!” Elsewhere, the Owl internal monologues about people being mice (He’s an OWL, you see) thinking about how he used to be dead inside, too (It’s a JM DeMatteis comic, you see) when The Vulture shows up. He’s young now. Don’t ask, I don’t even wanna talk about it, we’ll see it eventually. They had a planned meeting, and they swoop away to go be green flying dudes together, finally, after all these years. Did they ever team up before? I can’t say. But they are both green flying dudes, it only makes sense. Meanwhile, in Pittsburgh, MJ is ruminating on her past. Even though she was really connecting with Gayle and things were going good in TAC, no one is allowed to be happy in ASM, so she can’t sleep and she’s thinking about how her childhood sucked, but Peter seemed so happy about his.

I am running out of ways to scoff at this stuff. The age difference between MJ & Gayle sure seems to have changed since Parallel Lives, huh? Back in New York, Spider-Man continues to reject DD’s dumb story that he’s not Matt Murdock, saying he’s been following him to make sure. DD says he isn’t Matt, and even if he was, he couldn’t help Spidey.

/sigh. So they go to Matt’s grave, and DD tells him if he really was Matt Murdock and he really did fake his death (OJ style!), he would tell Spider-Man to kill Peter Parker, bury him now, and forget he ever existed. Just a couple’a dudes being bros!

I mean… what’s supposed to be going on here? If they’re so angry and sad and edgy all the time, what is this? I keep coming back to why would Spidey, and now Daredevil, be so committed to helping people after being willing to turn their backs on everyone who cares about them? What sense does this make? What’s the endgame, dudes? Whatever it may be, we go see The Owl & The Vulture, also talking about killing and burying your old self (I have run out of snark)…

Owl tells him to give the guy the antidote and threatens him with his now Wolverine-size claws, but Vultch says there is no antidote as he snaps the guy’s neck.

What a great plan! Owl flies away wondering if he was so repulsed because he was against what Vulture is planning, or so tempted by it. As hes pondering that, Sadsack & Saddersack show up.

Oh, no! Spider-Man’s gonna die! I guess maybe you’re supposed to think he could die, and then Ben could take over? I don’t think anyone would fall for that, but I guess it’s a possibility. I maintain that Spider-Man facing certain for the 20 billionth time is not as shocking as his clone showing back up. Speaking of whom, let’s see how that final battle with Venom goes next time.