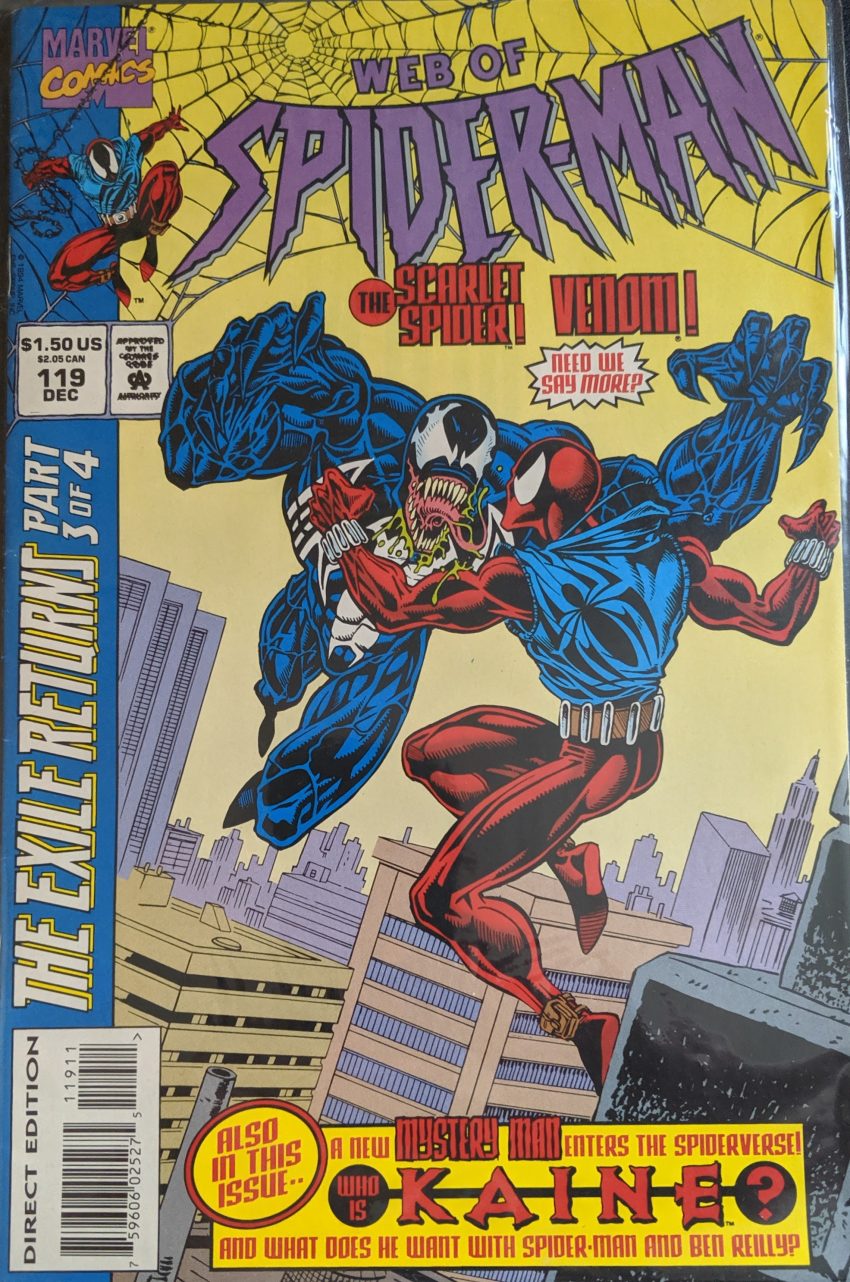 Boy, look at that cityscape. I happen to know Steven Butler was based pretty much where I grew up, coastal Mississippi, and this New York skyline really looks like it. Oh, goodness, who is Kaine? Doing these things out of order definitely has its downsides, I guess. Then again, Kaine is dumb, so spoiling his deal doesn’t feel too bad. Ben Reilly arrives back at the crappy motel he lives in, messed up from his fight with Venom.

So, I know it says “this shirt,” but… kinda seems like it’s the sleeves he cut off his sweatshirt, doesn’t it? Not just the color, either. And, hey, first mention of Seward Trainer, also seen elsewhere. Then we meet this lady…

…who I do not recall at all. And then… things just go off the rails. I’ve read these pages three times now, and I have no idea if they’re supposed to be funny or not.

I mean… that is hilarious. That is gonzo. But is it supposed to be? I literally have no idea. And if you think that key trick is an absurd use of the Venom symbiote, buddy, you ain’t seen nothin’ yet. Woo, I need a minute. WHAT HAPPENED TO THE TYPICAL AMERICAN FAMILY!? Marvel should put that panel on a shirt, man. Woo! Ok. I’m ready to move on. Haha, as Venom is bemoaning the end of the typical American family, Ben Reilly is getting stitched up at what we’re told is the only clinic that would take him without health insurance. But a nurse has contacted Ken Ellis via The Daily Bugle, saying she heard about a reward for info about a young male with a gut wound on his left side. Very specific! Where did she hear this, pray tell? And only, what, a couple hours, at most, after the incident? It’s 1994, she has no mobile phone or internet. Did Ellis hire someone to put up posters? At any rate, he’s on the case, and he’s not alone!

She may be a weird muck monster, but it’s 1994, we gotta get those butt shots in! As whatsherface goes after whatshisname, we move our scene to a meeting of some generic mob dudes, and the hitman they’ve hired to get some other mobsters off their turf. A hitman named –you guessed it!– Kaine. As the guy details the deal, Kaine is ignoring him to read the paper.

The dreaded Mark of Kaine! Or at least “dreaded.” Back at the clinic, Ben Reilly is all patched up, and good thing, too, because Ken Ellis is pushing his way through the clinic to get to him. But Ben is already gone when Ellis gets to his cot, up on the roof to be confronted by Scream. I keep wanting to call her Shriek, but that’s the OTHER goofy 90s lady in Spider-Man comics named after a sound people make. My bad.

Man, she gave up WAY easy! She thinks “we’re out of control!” as the chunks of masonry rain toward the streets below. Turns out, Ben just stuck to the underside of the roof edge, and he sees this happening, so he leaps down, punching most of the debris into smaller, less dangerous pieces as he goes, which is very funny. Ben then… flashes back to Spider-Man’s origin? Uh, ok. He’s decided (Very quickly) that letting Scream go betrays his whole power & responsibility thing, so he heads back to his flop house to mix up some web fluid. Gabrielle from earlier comes back to check on him, but he says he’s busy. Super nice to the lady who saved your life, dumb dumb!

This’ll be Ben’s “impact webbing.” Having him cook up a “cool” new web gimmick was supposed to be one of many clues that he was the real Spider-Man, I think. Great stuff. Meanwhile, Scream is rampaging around Times Square for no reason, and Venom starts fighting her, saying they’re sick of spiders and symbiotes “threatening the very identity we fought so long and hard to make our own!” Uuuuuh. Venom’s just a lame evil twin, what identity?

Ooooh, Venom said “me” instead of “we,” that’s demerits for everybody.

I totally do not remember any of his other new weapons. Which leads me to believe “impact webbing” is the only one that made it past this storyline, but we’ll see. As I said on the SM 52 post, not everybody has a good take on Venom. Todd McFarlane created the look. Erik Larsen added all the stupid teeth and tongue and drool. But it’s always been my opinion that Mark Bagley perfected him, finding a middle ground between those 2 guys. And as Butler just seems to be aping Bags, he gets away cleaner than a lot of artists.