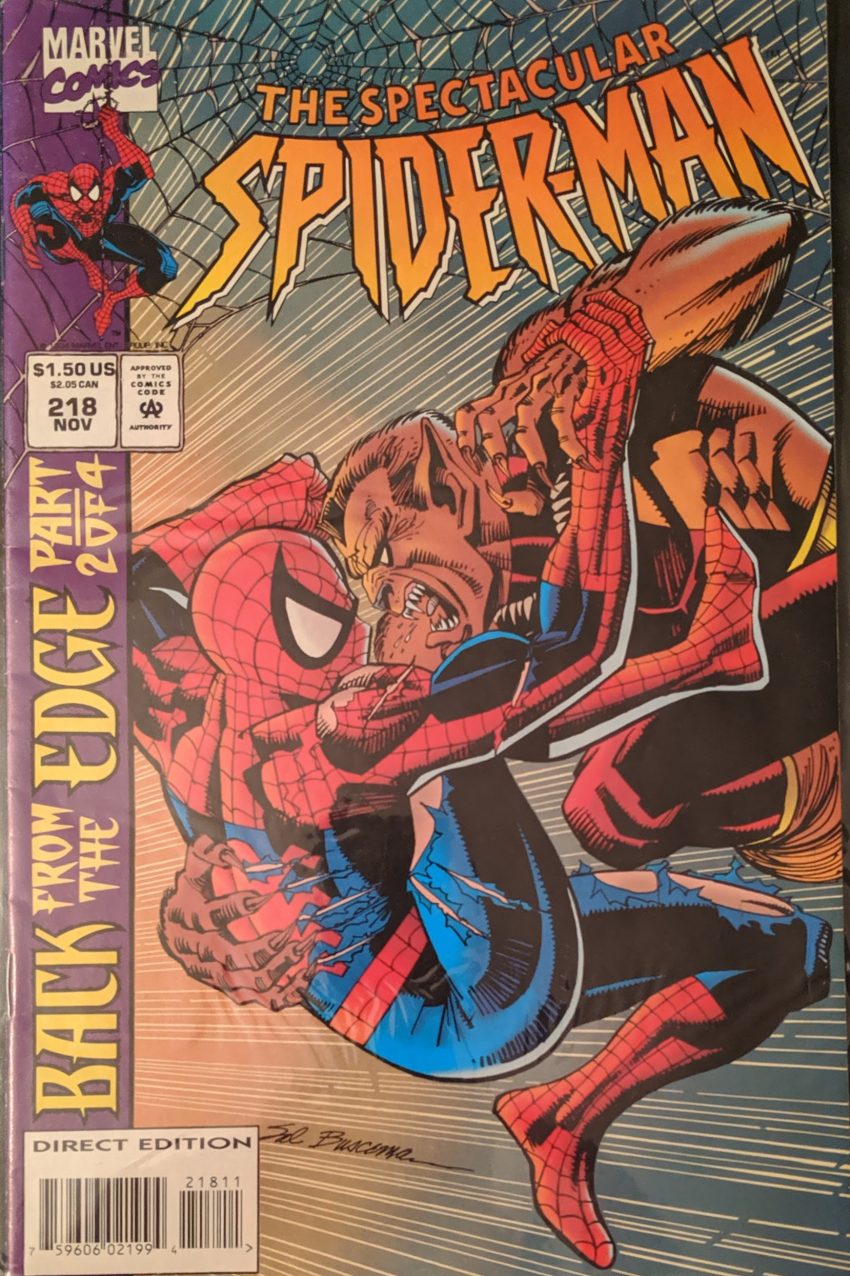 Back to the real Spidey now, fighting the newly mutated, I guess, Puma. This series currently being brought to you by plotter Tom DeFalco, illustrator Sal Buscema, scripter Todd DeZago and colorist John Kalisz. Though, If I remember right, a big change is coming to the art soon. Whatever weirdness has happened to Puma, in spite of how he looks on the cover, co-creator Defalco and the rest embrace it on the interior pages, giving him the more catlike appearance and crazed demeanor.

This “I am The Spider” stuff is stupid and insufferable, but full props to Sal for using those sihlouettes to make him look like he’s got spider legs down there, that’s fun. The switch to an omniscient narrator there sure is jarring. They slug it out for a bit until Nocturne stirs from unconsciousness. Puma’s bloodlust seems to dissipate, and he just leaves. Spider-Man thinks he should go after him “Be The Spider!”, but Nocturne needs help, and he ends up being Spider-Man, instead.

Wah wah. While Spidey takes Nocturne to her old place, Puma stops a mugging. Yeah! He just dives into a bunch of dudes harassing a woman, and then manages to not hurt her and run away. Sure, man, ok. Spidey reaches Angela’s old apartment, but finds a new couple has already moved in. Makes sense. And then he has an epiphany:

That’s a nice segue to the big responsibility our idiot hero is currently shirking, so we check in with Anna Watson sitting with Aunt May.

She did raise a fine young man, whatever happened to that guy? Ah, well, Spider-Man has now made a sort of web lean-to for Nocturne to lie under, and as she wakes up a little more, she blasts his mind with her concern for Puma and makes him think he should try to help the poor kitty man. Then we hop over to Pittsburgh, where MJ tells Gayle she hoped she would give her a second chance and they could try to be a family again. The sisters hash out the past, but Gayle no longer resents MJ for leaving, saying they had to live their own lives, and it actually looks like things are going well for them. That’s nice. I guess their dad is still in jail? Not sure. Back in New York, Nocturne is apparently doing well enough to fly again.

Yeah, uh, so, that’s Matt, actually. But like all superheroes in the 90s, he got all emo and stupid and faked his death so he could just be Daredevil full time in his brand-new, hideous costume. It’s like if Peter’s dumb “I am The Spider” thing had led to him becoming The Scarlet Spider instead of having a clone running around, basically. Ugh, the 90s. Well be seeing more of “The New Daredevil” shortly on the blog. In the meantime, Spidey & Nocturne have found Puma. The fellas start fighting again, and try as she might, Nocturne can’t control Puma’s rage anymore, so it’s all bad. But in Pittsburgh…

…things are pretty good! Back at the fight, Nocturne summons up what strength she has left and jumps between the dudes, creating a psychic link between them so they can each feel what the other is going through.

Oooo, burn, Peter! Why don’t you grow up and stop acting stupid? Maybe soon… Maybe not. In the letters, a guy calls them out for TAC 216, where, as you may recall, Spider-Man (briefly) learned to love again thanks to being touched by a slime monster that was never seen before or since. This was described as “corny.” Editorial tries to defend this story beat, but they can’t, because it was unbelievably stupid. But speaking of the letters, I don’t think I’ve yet read a letter page from the 80s or 90s with a future pro’s name in it. That’s weird. 60s and 70s letter pages are chock full of future comic writers, artists and editors. I wonder why the talent of tomorrow isn’t writing in the later decades.