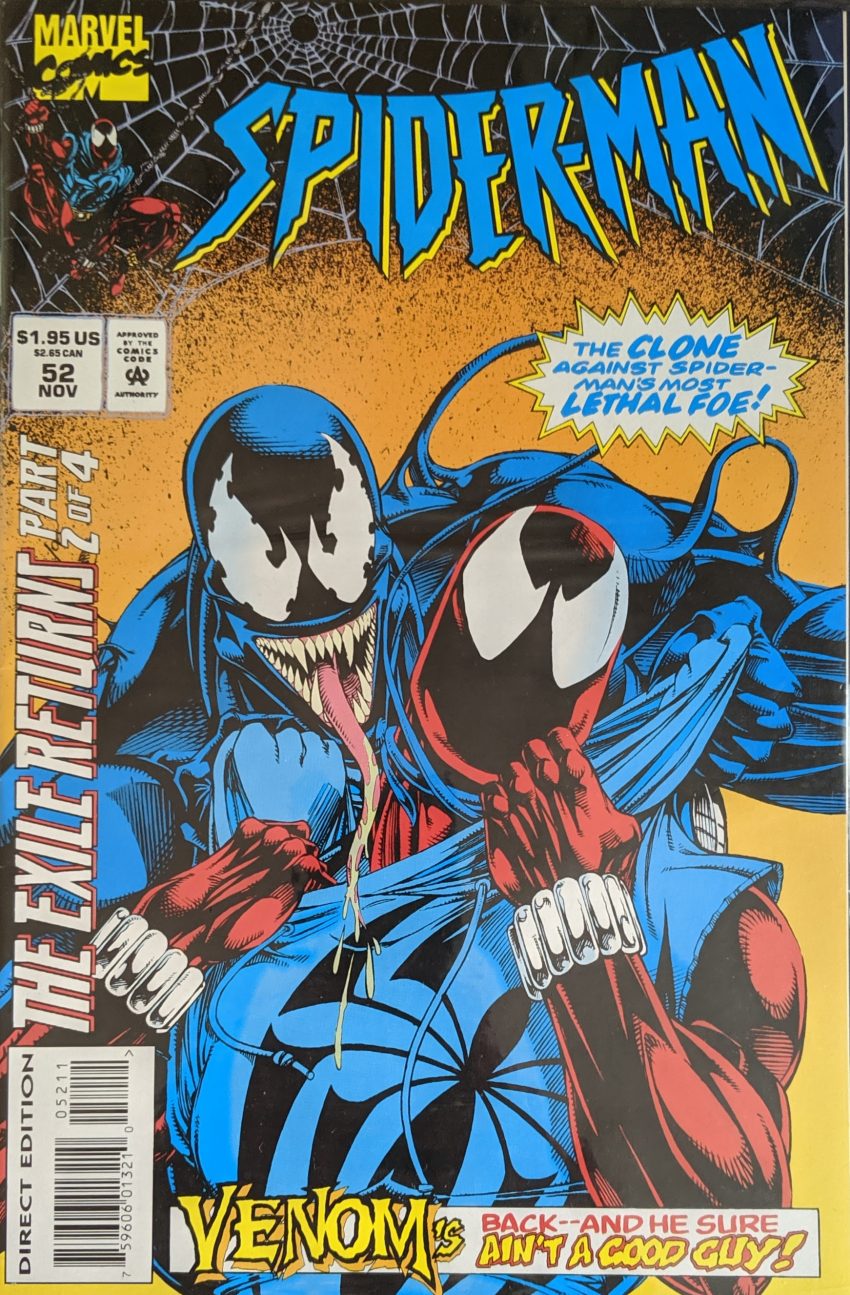 Tom Lyle had some questionable notions about hands. “He’s not a good guy!” I believe at this time, Venom was still starring in a monthly series of miniseries where he certainly was the good guy, albeit in a Punisher-y anti-hero way. Venom got so popular that they eventually came up with a weak excuse for him and Spider-Man to strike an uneasy truce so Venom could go off and be a star in his own right. This series continues to be brought to you by Howard Mackie, Tom Lyle, Scott Hanna and Kevin Tinsley. We begin with The Daily Bugle’s new hotshot reporter Ken Ellis.

And yet, it would be Ellis who was “put out to pasture” when he didn’t catch on, while Ben Urich continues to appear in comics today. As Ellis runs out to get his story, he’s met on the street by Ben Reilly in his new getup. He says he needs to find Venom, and Ellis seems to have the inside track. Ellis asks him if he thinks he’s Spider-Man, he says no.

For his part, Venom is kind of on a rampage, having made a pile of “muggers, thieves and killers of all types” on the roof of a building which is now surrounded by cops and onlookers. He tells himself how he’s “the good guys” now and doesn’t appreciate everyone being ungrateful. A quick cutaway implies a mystery figure is watching Venom, then we follow Ben Reilly to the scene, questioning himself the whole way, remarking on how Spider-Man could barely beat Venom and Ben is out of practice. Venom sees him and assumes it’s Spider-Man in a new suit, and that gets him a kick in the gut.

Venom wails on Ben while saying he and Spider-Man have an agreement, which means this guy is a fake, and Ben agrees. He’s pretty emo about the whole clone thing. As Venom is about to finish him off, a voice warns that he has to get out of here. The mystery figure is revealed to be…

…Scream, one of a ridiculous number of other poorly named symbiotes introduced in Venom’s first solo miniseries. As she and Venom get to fighting, Ken ellis shows up, intent on interviewing whoever survives this fight (I mean… has the idea that they’d kill you not crossed your mind, dude?), and his story about this becomes the narration for a bit.

Ben saves the woman in the car and a guy falling off a roof while thinking he’s no hero and he’s got to get out of here. But as he sees Venom and Scream fighting toward a trapped transit worker, he swings on in anyway, once again getting Venom with a surprise attack. Scream begs him to stop, says she has to learn how to control her “other,” while Ben says Venom is the last guy you want to get advice from (Feels like a fair point).

So now Ben has a supername whether he likes it or not (And who would?), and Venom bursts out of the river swearing revenge on the last page. Venom is such an odd character design, and I feel like most artists didn’t really “get” him. Lyle seems to have a really hard time with the face. Next time we’ll see how Spectacular is doing with edgelord Spider-Man vs. Puma.