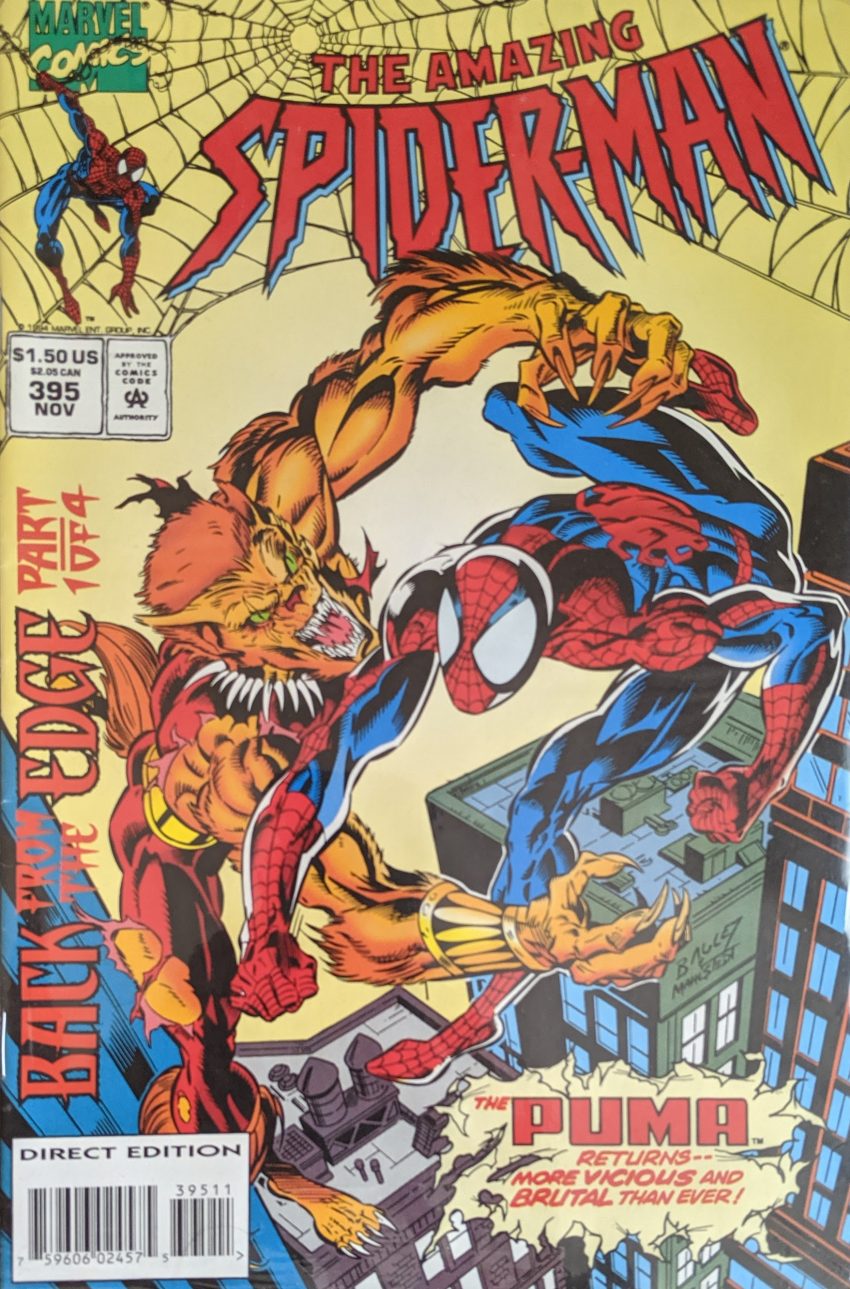 Mark Bagley’s take on Puma is, uh, different. ASM is still the province of JM DeMatteis, Mark Bagley, Larry Mahlstedt and Bob Sharen. Bob Sharen: still hanging in there! Been at it for a long time. Alright, let’s get to the suffering! We open on a drug deal with some no name characters and blah blah bah when a scary animal noise makes the boss man run for the door in fear…

The mystical looking lady there was introduced in last year’s TAC Annual, which I haven’t actually read before, I’ve just seen her on the cover, and I don’t remember this issue at all, so I’m flying blind here. She seems to be controlling Puma, and then she does a whammy on the drug dude to make him feel all the pain and anguish he’s caused others and wish he was dead. Welcome back, guys! Speaking of wanting to die, we turn our attention to Spider-Man. Or, I guess, “The Spider,” whatever. He’s in Aunt May’s house, and DeMatteis is trying to wax poetic through him about coming back to his old home as if he didn’t come back here, like, yesterday in Adjectiveless Spider-Man.

He thinks he was happy here and smiles a little. Then the ghosts fade and he’s out swinging in the rain, calling himself an idiot and saying the past is dead and saying he is The Spider. /sigh This is intolerable. All the way over in Pittsburgh, but still in the rain, Mary Jane finally arrives at her sister’s home.

Gayle gives her a big hug and welcomes her home. A far cry from where they were last time we saw them, so that’s actually kinda nice. But too late, we’re back with Puma and whats-her-name. Oh, her name is “Nocturne.” How nice. I think she has bat wings now? I don’t remember this. A bunch of captions talk about how they used to have lives and dreams and stuff and now they just have each other (blah blah friggin blah, this sadsack garbage is killing me), and we’re told Nocturne has been focusing on the “psychic cry” of a “tortured soul” for weeks now, and she tells Puma “It’s time.” then they zoom off into the night. Gee, which tortured soul could that be? That tortured soul has broken into Midtown High to look at more ghosts of his youth. DeMatteis has him remember being bitten by the spider at 16 instead of 15, which is pretty lazy, as he rambles his sad internal monologue and so forth, telling his past self he has no idea how sad and cold the future will be (Just… shoot me) when he hears Puma’s growl and curses himself for letting his guard down, because when he does that…

Spidey recognizes Nocturne as one “Angela Cairne” (I should read that annual). She seems to want to help him, but he says he can’t even trust the people closest to him (WHY?) how could he trust her? Then he trusts her anyway.

Oooooh, lemme guess, she got hit by the same or a similar process to what created Vermin. I’ll find out one day. She gives Spidey a look at her memories. How she found Puma and nursed him back to health after his apparent death, and how they’re buddies now. But the strain of showing him her memories weakens her, and Puma becomes angry.

Can you imagine for a moment being a goofy little 16-year old kid just wanting to read some cool Spider-Man comics and having to settle for this bullshit? Spider-Man has really tested my fandom over the years. Next post: Spider-Clone tangles with Venom. At least he’s not all sad and whatnot, I guess.