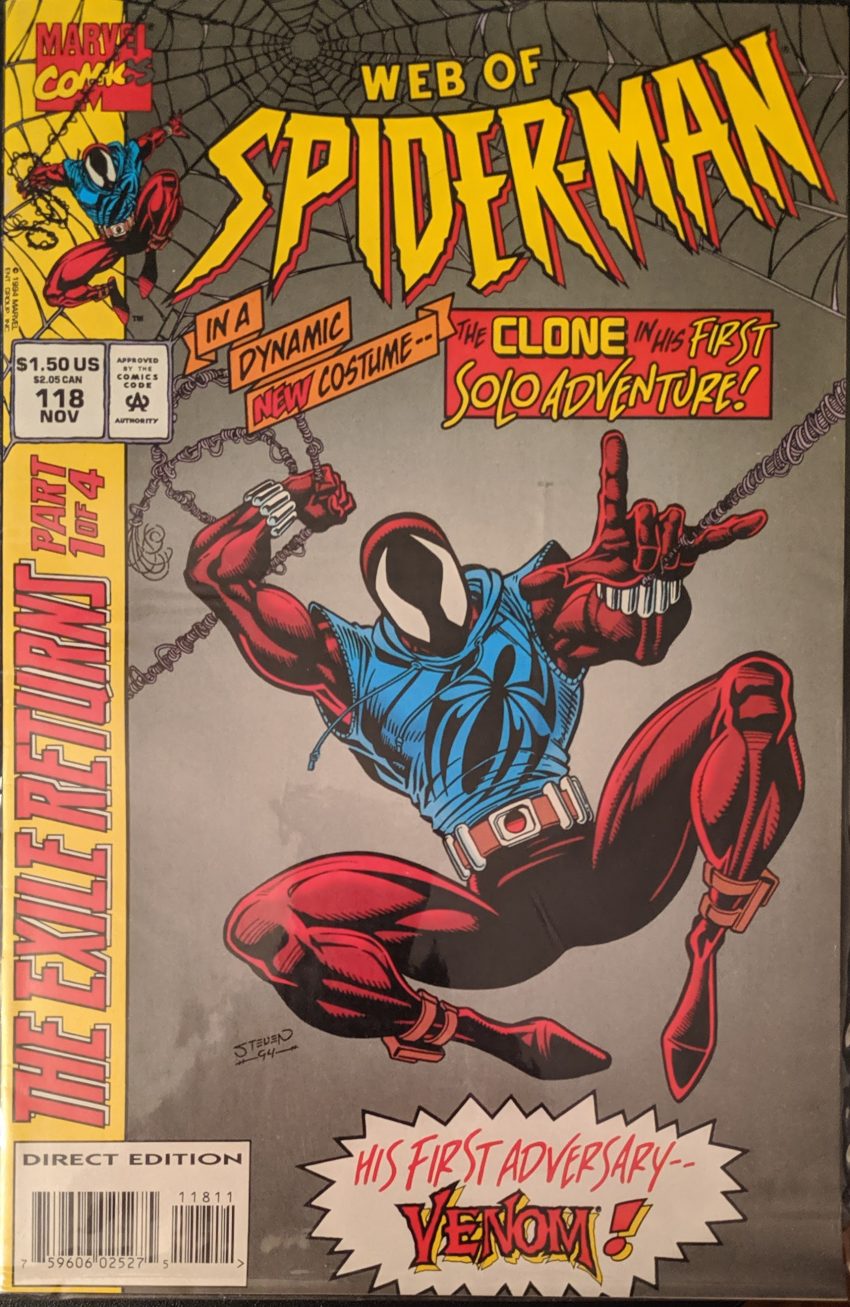 Welcome back to 1994, I guess. Not that it’s terribly exciting to be back here. Welcome back to the era of the angry edgelord Spider-Man and his dopey clone. To wit: There you have it. Enter a “bold” new era with this, the first solo adventure of “the clone.” In his “dynamic” costume. Is it? Iiiiiis it? Also debuting this issue: The hideous new Spider-Man logo. It’s the 90s, it’s gotta be more edgy!! This logotype will adorn all the comics, the aforementioned cartoon and most mass market products for far too long. I wanna say until 2001 maybe? Like, crazy long. It’s still Terry Kavanagh, Steven Butler, Randy Emberlin and Kevin Tinsley bringing you WEB in this period. For a couple of months, The Scarlet Spider will star in WEB and SM, while the real Spider-Man will star in ASM and TAC. As I mentioned elsewhere, not a bad idea, really. If you’re going to insist on letting this idiot run around, any opportunity to not have to coordinate 4 monthly titles (and a quarterly) about a single character seems like one to take. I’m gonna be reading these as they were published. So instead of seeing all 4 issues of “The Exile Returns” (Wah wah), we’ll look at part one, then ASM, then SM, then TAC, etc, cliffhangers and all. Let’s get to it.

Agreed, lame! I’ve never been to The Museum of Natural History, do they legit have a random gigantic spider hanging around? A guard tells him they’re closing and he’s gotta leave, and as he does, he thinks about how he’s going to skip town and recaps why he came back in the first place. That’s when he meets… a fateful sweatshirt!

Ben wonders if he could really stand by and not help, if he can really avoid power & responsibility. Then we check in with Venom, swinging around town. We’re told he came back because of the attack on Ravencroft, to make sure Carnage didn’t get out. Uh… ok. Hey, maybe we can pretend he hopped up to NY from Washington after that whole idiotic Archanis Project mess. Whatever, as Venom is a quasi-good guy now, he happens upon a car chase with gun fire between cops and robbers and does his “brutal justice” thing.

A high speed chase during rush hour in New York sounds slightly less plausible than a guy in an alien costume absorbing bullets into his gut. Day saved (?) Venom swings away, thinking maybe it’s time to put his ghosts to rest, and then we head over to the hospital Aunt May is in, where she has a classic visitor. Not that I recognize her at all on this page without being told who she is.

And judging by the dialogue, maybe I wasn’t the only one. Ben is watching all this through the window. He has suddenly decided he can’t leave Aunt May in this condition. I suppose?

He goes to the warehouse where Peter caught Uncle Ben’s killer to flashback to Peter’s origin, because hey, why not, right? Meanwhile, Venom is on a similar kick, revisiting the church where Eddie Brock & the alien bonded.

I believe that is the random and hilarious debut of new Daily Bugle reporter Ken Ellis. How long was he sitting there??? Whatever, Ben is now at The Brooklyn Bridge to flashback to Gwen’s death (Bridge controversy rages on) when guess what? You’ll never guess. He sees a girl up on the same ledge Gwen fell off of, and she’s about to jump! I KNOW! What are the odds???

Ben saves her and drops her off an at ER before vanishing on them on account of, you know, not being a real person. And then, as the sun comes up, he has little brood about the whole situation.

And there he goes! The Scarlet Spider! The Dr. Rocket to Spider-Man’s Dr. Pepper. The Transmorphers to his Transformers. The DiGorno to his delivery. Speaking of Spider-Man, we’ll see how he’s doing next post. Spoilers: still acting like a dumb baby.

Marvel used to publish a year-in-review magazine every year which would contain often surprisingly savage articles making fun of the comics they sold you in the preceding 12 months. I believe it was in one of those that I saw someone ask if the pouches on his ankles are where The Scarlet Spider keeps his Fruit Rollups. It might’ve been a Wizard magazine. At any rate, 25+ years later, it’s still the first thing I think when I see him.