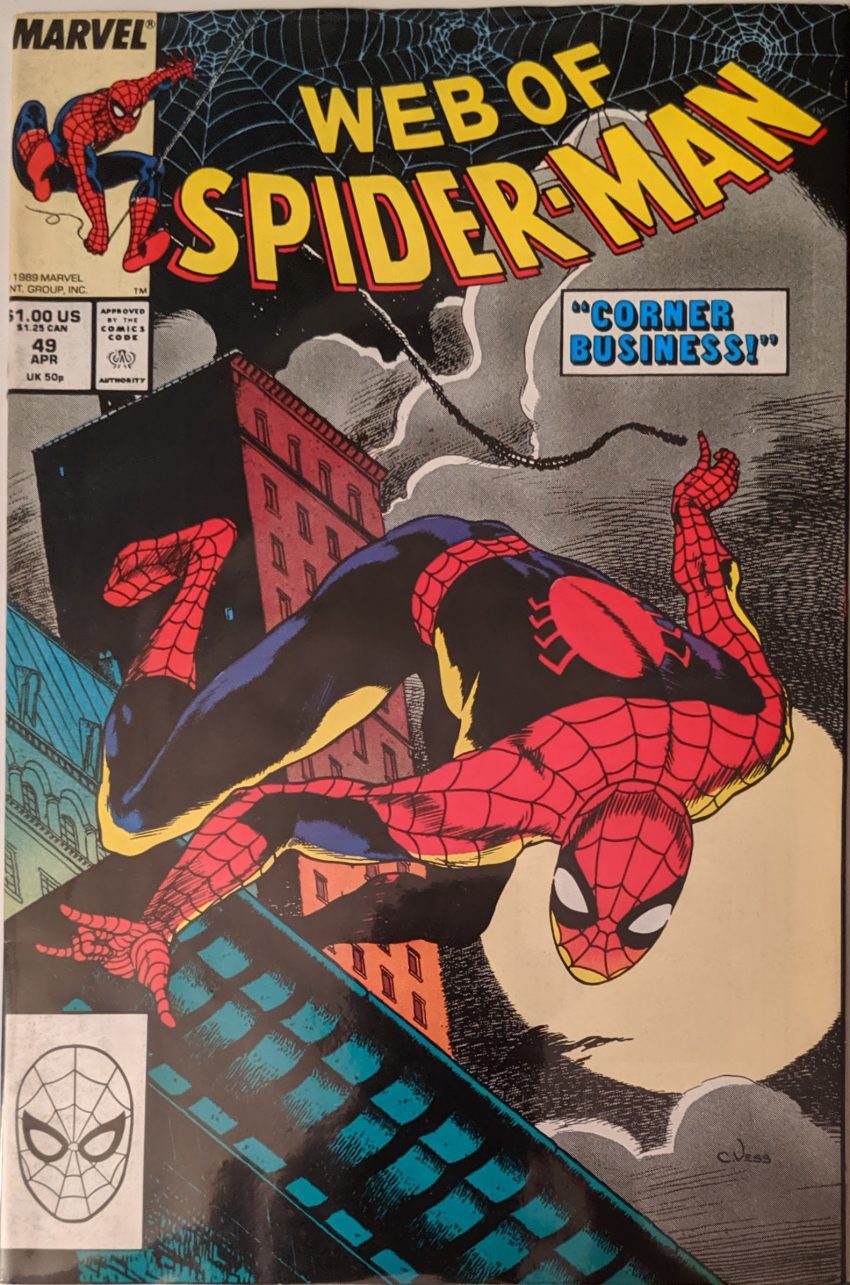 Ladies & gentlemen, in the wake of all that Inferno madness, may I present to you, a fill-in issue. Much as I love Charles Vess, this isn’t his strongest cover. Weird hands. Inside, we got writer Peter David (Just can’t stay away), illustrator Val Mayerik and colorist Janice Cohen. They begin their tale on a drug dealer waiting on the corner for business, flipping a coin. A kid comes up and wants to buy something, but doesn’t have enough money. Before they can argue about it, Spider-Man webs the drug dealer, Winston, from the shadows.

The camera panel sort of insinuates someone’s watching this fracas, but that’s just Peter’s camera, doing its thing. He leaves Winston for the cops, the dealer yelling “What’d I ever do to you?” Which proves a fine segue for Spidey to flash back to why he had such a beef with that guy. It goes back to this morning, when Mary Jane came out of the subway and saw her friend Lorraine across the street… with this Winston guy. She ran over to say hello.

Peter was in a meeting with Kate Cushing, and MJ called the city desk to get him. He found his way to Lorraine’s, where she refused treatment, saying she’d been to rehab and it didn’t work. MJ wasn’t letting her go, though. She asked Peter to get rid of Winston, scare him off, knowing the cops wouldn’t hold him for long. Peter decided to wait ‘til nighttime, and also headed back to The Bugle with an idea for a side quest…

Thusly, the next day, when Winston tries to take his business to another part of town, Spider-Man is thee to ruin it. Winston flees into the subway, while elsewhere, MJ is trying to get Lorraine some help, but the facility she’s gone to is overworked and can’t see her for six months. Meanwhile, Winston’s picking up a new shipment of product (Hidden in a trash can? That seems like a bad system), but guess who’s right behind him?

Spidey keeps ruining Winston’s day as MJ finally gets Lorraine to a private facility, but the cost is way too high for Lorraine to pay, and she runs out in tears. Rough going. She takes Lorraine home, and wants to go out to talk to some more people, asking Lorraine if she’ll be ok alone for a few hours, and Lorraine, of course, takes off as soon as MJ’s gone. For his part, Spidey’s lost Winston, who had a cab zig zag all over some alleyways to give him the slip, unknowingly getting out of range of the Spider Sense, but Spidey’s looking for him. But also worrying about how invested Mary Jane’s gotten in all this.

Spidey swings into an instant warzone, smashing through the window to be greeted by a handful of goons with a lot of firepower. MJ has now returned to Lorraine’s to find her missing, after having talked to “her more high-powered friends” and gotten whoever that is to agree to pay for her treatment and one of them even wanted Lorraine to model their work, but… no Lorraine. MJ decides to wait ‘til she comes back. Meanwhile, Spider-Man is doing his thing, tearing through all the goons until everyone’s unconscious.

Peter doesn’t feel any better when he hooks back up with Mary Jane and is told they found Lorraine unconscious in an alley, having done some kinda drugs that really messed her up, and her chances aren’t good.

Grim ending! But a realistic one. Pretty good issue. Cool to see Peter & MJ working together on something, even if they weren’t often actually together for it. Wish there had been a lot more of them as partners during the marriage era. I feel like most writers just didn’t know what to do with them.