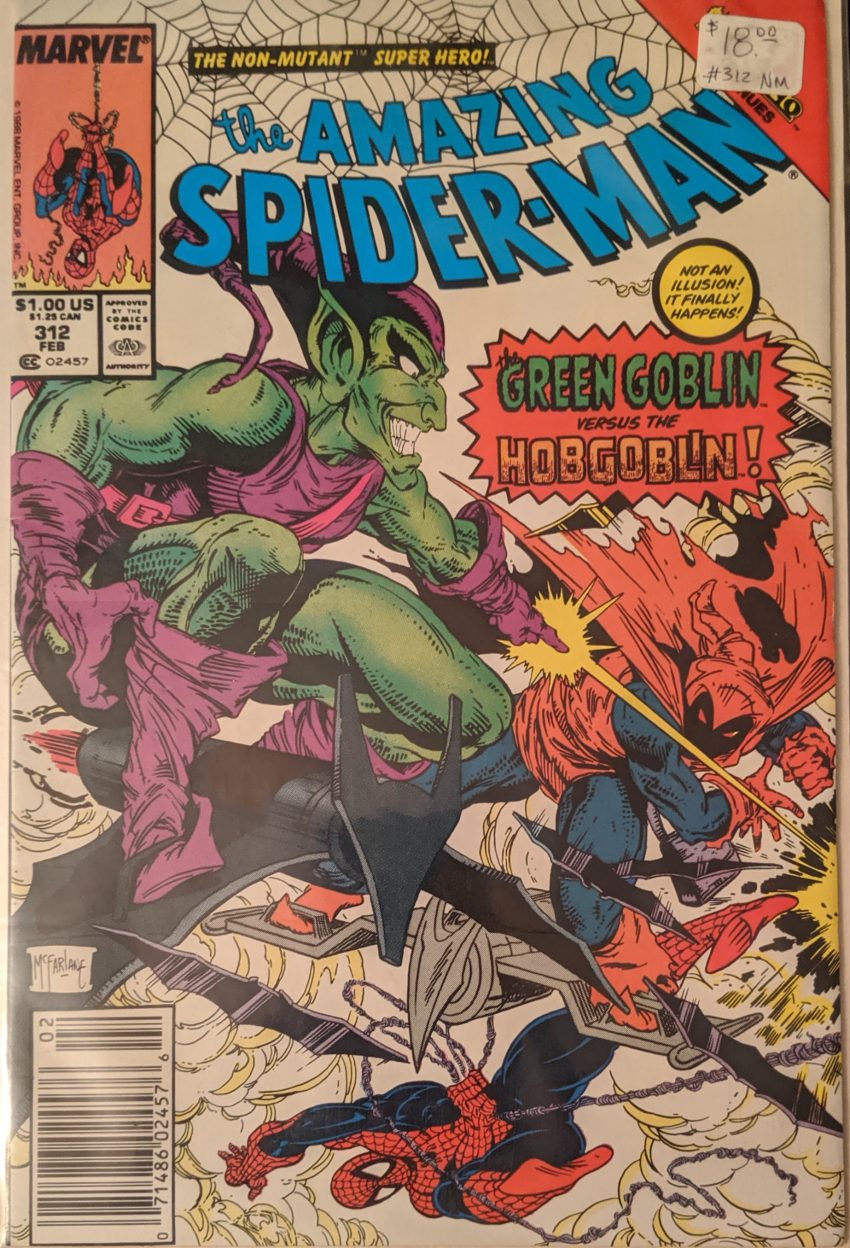 $18! Highway robbery! I don’t recall getting this one, but I hope I didn’t pay that. I wonder if this is one of the ones my uncle bought? I retroactively hope not. But, as a youth, when I found out there was an issue where Green Goblin fought Hobgoblin AND it was from the McFarlane run? Had to have it. Continuing from Web, obviously…

Dramatic splash out of the way, Harry backpedals super hard, thinking he’s not The Green Goblin, his dad was. The real one, anyway. He then recaps Web 47, and as Liz knocks on the door looking for him, he pulls on the mask, saying Harry Osborn might not be able to protect his family, but The Green Goblin can.

I mean, if he’s not powered by the family madness, and not juiced up by his dad’s formula, he’s just a guy on a glider, right? Anyway, we cut to Peter & Mary Jane, both kinda scared and not wanting to be apart, but both going off to do their jobs, anyway, in spite of the whole city going more and more insane by the minute.

Time for a probably very one-sided showdown. Almost! First we follow Peter to The Bugle, where it’s pure chaos. The presses have started printing pornography by themselves instead of the paper, and JJJ tells Peter The Statue of Liberty snarled at tourists this morning. He tells Peter the whole city’s a story, go take pictures of anything, and storms off. Then we can rejoin the fight, already in progress. Hobby threatens to kill Liz, and Harry throws a pumpkin bomb at him, but Hobby easily deflects it…

Too much cape! I know that’s, like, McFarlane’s thing, especially once he gets to Spawn, but this is too much. Then we cut away again to ESU, where a deeply stressed Curt Connors is turning into The Lizard. Shocking, I know. But that’s for later, we’re off to see Peter again, now back at his home. With the phones not working, Liz has sent him a message via courier, saying the cops are busy, Harry’s disappeared, and maybe he can use his news connections to help. That flimsy excuse out of the way, it’s time Spider-Man got into the Goblin fight. Almost!

As MJ ponders that weird question, Spider-Man arrives as Oscorp, smashing through a window and right into The Hobgoblin. He thinks he’s got this under control until he sees The Green Goblin zooming around in here, too. The distraction lets Hobby get Spidey with some of his patented gas, but then Harry shoots his blasters at Hobgoblin, giving Spidey a chance to recover and kick a whole filing cabinet into Hobgoblin. Harry tells Spider-Man to stay out of this (Wut). Spidey tells him he should go stay with a friend, like that Parker kid, but Harry says he refuses to drag anyone else into this. That was an odd choice (What if he’d said “ok!”?), but it did let Spidey confirm Harry doesn’t remember his secret. Harry follows the escaping Hobgoblin and Spidey follows Harry, and then it’s back to MJ.

Sound effects! As ever, Mary Jane can take care of herself. Now, back to the hero stuff, as Spidey has secured a webline onto Hobgoblin’s glider (And Harry is mysterious absent all of a sudden). He just flies Spider-Man into a water tower for his troubles, but that’s all given Harry time to set up his finishing move:

The day is saved! For the moment. As Spidey and Harry split up, Spidey worries that things are getting weirder by the minute in New York, and hopes they don’t get worse, as we see The Lizard emerge from Curt Connors’ office. Worse it is! But that’s in the next issue of ASM. First we’ll check back in with TAC & WEB.

Pretty big moment for the Spidey mythos, the two Goblins going to war. Granted, it’s not the REAL Green Goblin (Or even the real Hobgoblin, technically), but the two characters had never shared a book before. Super cool to the young me, I can assure you, but I was still learning everything, and I don’t think I really appreciated what a crazy event that was.