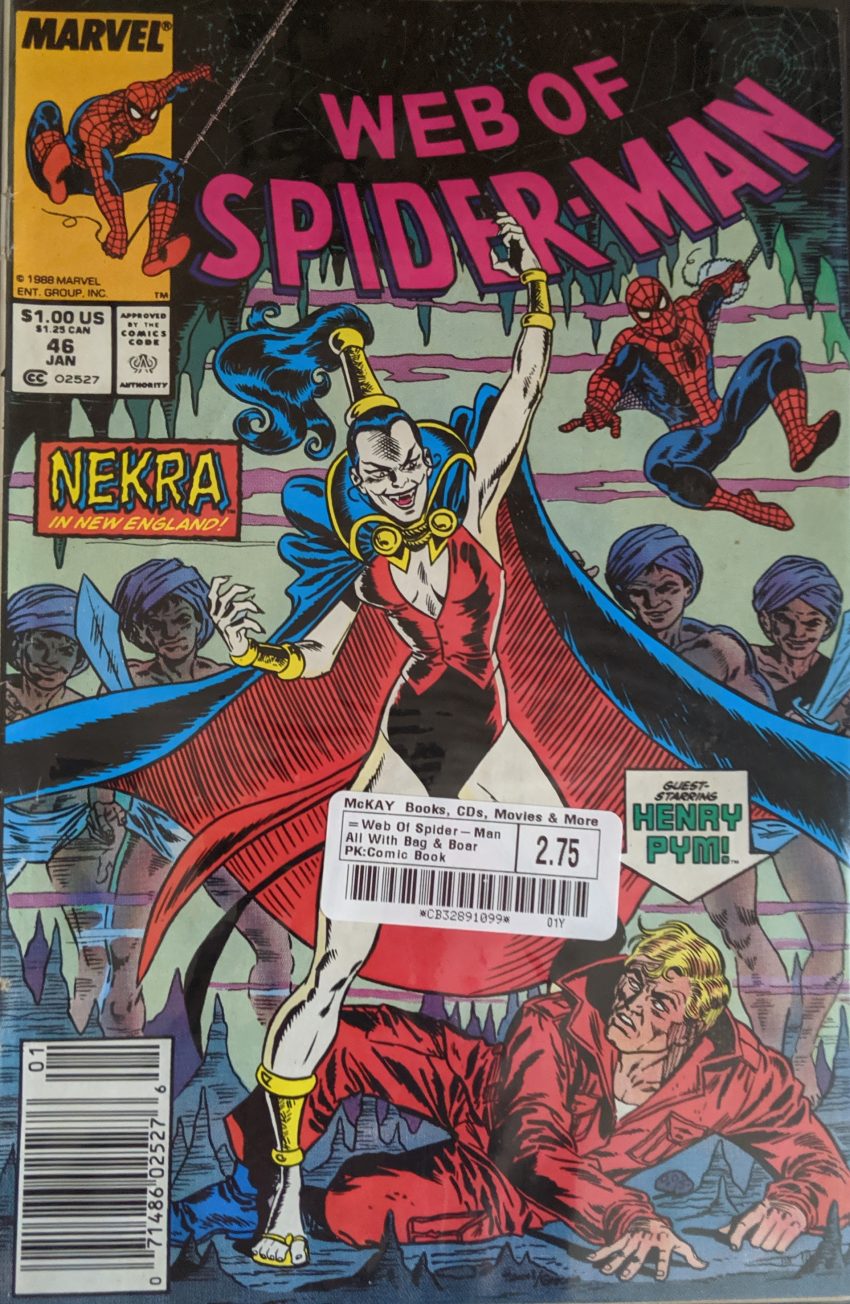 It’s your classic fill-in issue, folks! Richard Howell steps in as both writer and penciler. Keith Williams and Janice Cohen aid & abet. I want to know who did this cover. Could be Howell. The Spidey eyes are very Romita-y, but nothing else is. This comic looks insane, and proves to be insane from page one. Peter Parker is in Shriver Cove, Massachusetts, for the final stop on his book tour (Which was clearly over in the last issue of ASM, but.. fill-in). As they exit a car, he and a local rep from his book company are being attacked by a man yelling “Hate outsiders! Kill them! Hate!” That’s page one!

This is bonkers. This is giving off a real “Shadow Over Innsmouth (with no fish people)” vibe. The action only slows for a second, as an explosion outside his hotel room leads Peter to see the townsfolk have SET HIS RENTAL CAR ON FIRE and are all chanting “Kill the outsider!” So he gets in his work clothes and goes out to meet them.

All his other attackers also pass out, so he swings back up to his room, only to find it trashed. He calls Jeff, who casually… SUPER casually… tells him some partiers got out of hand and he’ll have to stay an extra day while they get him another rental car. Peter just accepts this! And I guess goes to sleep on the floor of his ruined hotel room or something, because smash cut to tomorrow:

Ms… Hatros. That sounds totally benign. Nothing to worry about. Jeff points out The Hatros Clinic in a spooky house on the hill and says the town is really lucky it opened up. He goes in for an appointment, but Peter follows and is rebuffed.

It’s only been 3 months since the previous cult story in WEB, and… we’re back! Spidey thinks this is out of his area, and… finds a phone? In the hate clinic?? To call someone else, but he trips an alarm, and the uncomfortable stereotypes on the cover come rushing in, so he flees into the air ducts.

That Vision & Scarlet Witch comic featured the work of one Richard Howell. Synergy. Seems like if you can get more Avengers to come help you, you should get more Avengers to come help you, but what do I know? Spidey once again escapes capture, and the goons go report him to their “mysterious” boss who we have seen on the cover already. Hours later, Hank Pym arrives in his goofy looking “bug-ship.” This is strange, strange period for Hank. I probably won’t bother getting into it if the story doesn’t require it, but right now he’s Hank Pym, Science Adventurer, no alias, no supersuit, just his short-lived jumpsuit outfit that looks exactly like Wonder Man’s short-lived jumpsuit outfit. Hank read up on the town, and found that, several months ago, they began discouraging tourism and limiting news from outside the town. He starts testing the water, and finds it’s “a process developed by tribal chieftans in Africa!” (Oh boy), but then gets attacked by the turban guys, all of whom seem to be white.

Are you serious? Spidey happened to call someone who knows this ding dong instead of his usual go-tos Curt Connors or Reed Richards? HOW CONVENIENT.

So… So the town is sealed off from outsiders… but… also, Jeff gave that wildly unsatisfying explanation for why you’d wanna be on TV here, and also, Peter was invited to be on TV here? That doesn’t check out at all. At any rate, it’s fightin’ time. While they fight, Spidey and Hank pretty calmly discuss the situation, which is funny, and Hank says he developed an antidote before he was captured, he just has to get to it. That makes Nekra even angrier, so she wants to fight him one-on-one, as Hank tosses a couple of tiny things in the air…

They keep her off-balance and distracted, which drains her hate-fueled powers, allowing Hank to get to his antidote.

Uuuuhhhh… ok. I mean, no, not at all, but whatever. Spidey douses everyone in the antidote, and they go back to normal pretty much immediately. They don’t remember what they’re doing here or why they’re dressed like this. Spidey & Hank start trying to explain, but while they do, Nekra breaks free.

Well that was bizarre. That was very Marvel Team-Up-ish. I don’t know anything about Nekra. Apparently she was created in Shanna the She-Devil, one of the billion or so comics about a female Tarzan-type character. Here’s what the internet has to say about her beginnings:

“Decades ago, Gemma Sinclair was an African-American cleaning lady at Los Alamos National Laboratory. While she was pregnant, an exploding lab experiment bombarded Gemma with radiation, causing her unborn child to mutate. Nekra was born albino-like with vampiric features. Loathed by her parents and community, Nekra ran away into the New Mexico desert to live alone when she was fourteen years old.”

Like you do. Nekra’s wiki entry is just a litany of gross stereotypes and terrible sounding stories, my goodness. Ah, well. We shant see her again. Next time, we finally dive into Inferno.