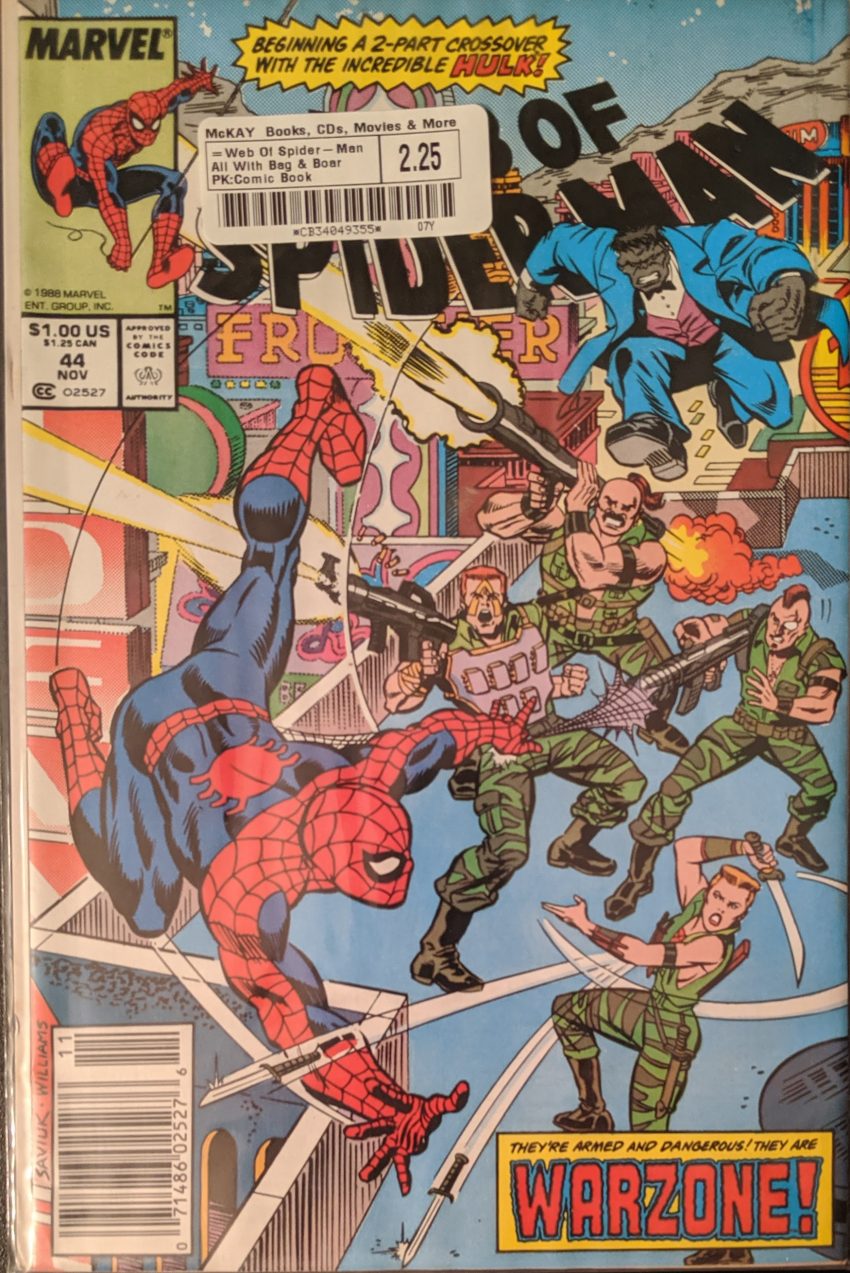 Spidey, why are you fighting GI Joe!? Look out, gang, it’s the Gray Hulk! He represents the teenage part of Bruce Banner’s repressed psyche. He’s not as strong as green Hulk, but he’s smart, and kind of a jerk, and calls himself Joe Fixit, and I think he works in a casino! Why? Who knows?! I know who knows: Peter David, longtime Hulk writer and also this issue writer. He’s on WEB for one more issue, so let’s see how it works. Spidey’s swinging around Las Vegas when his Spider Sense goes off.

Was that guy holding a bazooka? Who knows, Spidey is off, recapping his life and his book deal and how it’s brought him to Vegas. Then we meet more of whatever Warzone is:

I don’t feel much more edified. We take our scene to visit Marlo Chandler, sort-of-girlfriend to Joe Fixit (And future wife of longtime Hulk pal, Rick Jones, that’s not awkward or anything) on her way to see her man. But when she arrives, he slams the door in her face. He’s a nice guy. And we’re off again. The “Warzone” people have a montage of them getting into their GI Joe outfits while, on TVs in the background, Peter Parker appears on “The Dinah Show,” and it’s going terribly, with her constantly getting his name wrong and not letting him talk at all before throwing to commercial.

Marlo is also watching Peter on TV, and has decided he’s real cute. So cute, in fact, that she’s headed off to his book signing after the show to see if he’s as cute in person. Dang, Marlo, ok.

Well that sure got meta quickly. And that dude really did have a bazooka. His target is Charlie, who yells “Let the games begin!” as she dives out of the way, and right into Marlo. Then Charlie shoves Marlo into a lamppost, knocking her out. Rude! As Delta fires another missile right into the book store, Peter slips out the back and, as Charlie’s trying to get some payback, well, you know…

That guy is very strong. Turns out, also very fast, running away at what Spidey guesses is 40 miles per hour. He’s about to pursue when he notices Marlo, out cold and bleeding profusely from the head. He gets a tracer on Delta, then tells Charlie to wait for him while he takes her to help. Charlie doesn’t mention she’s the one who hurt Marlo, and is looking forward to using Spidey as a decoy.

A convenient meeting!  Mona the roommate calls Joe Fixit to let him know Marlo’s in the hospital and “some woman in fatigues” put her there. Hulk smashes the phone in his hand, and then we’re following Spidey as he swings the aforementioned woman in fatigues on the trail of Delta. They find their way to a place called The Coliseum,  where they’re attacked by Alpha, prompting Spidey to ask, “What the heck is this, a Rambo convention?” which is pretty good, and then…

I guess I gotta see about that issue of Hulk. I own very few Hulk comics, but a pretty random handful from David’s 10-year+ run. Too bad I don’t have that one… yet.