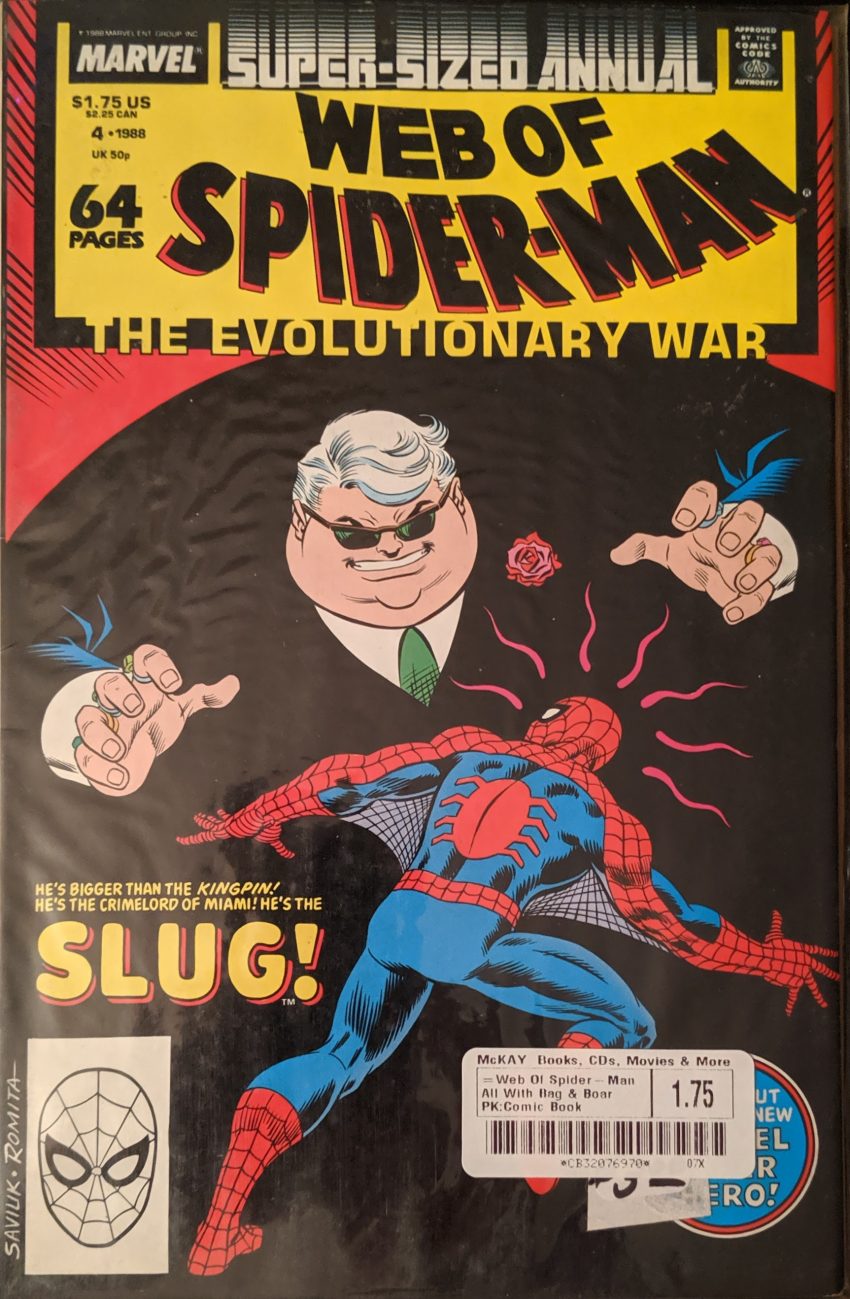 Yeah, so, that’s a thing. Created in the pages of Captain America, I guess… I guess because Mark Grunewald thought all Marvel mobsters should be huge?… it’s The Slug, and he’s here to hassle Spidey. Plus: The Evolutionary War is still a thing. Our main feature comes courtesy of Steve Gerber (Co-creator of Howard the Duck and Man-Thing, among other things), a return to the blog for Cynthia Martin (Inking her own work this time), and Janet Jackson (As ever, not that Janet Jackson). As it begins, Peter Parker is being interviewed about his book on TV.

(Solid Ditko impression!) Peter saying he doesn’t talk to Spider-Man after they had to pretend Spidey had joined the book tour seems odd. As the interview winds down, Peter says this Doyle guy can keep the book if he wants it, but he says spiders give him “the creepy-jeebies.” Back at his hotel, Peter tells MJ over the phone that this press tour is driving him crazy, but he lets her go as a housekeeper knocks on his door, triggering his Spider Sense for some reason.

Oh, hey, this is gonna be Poison, from that “The Great Game” story in Spider-Man 64. Ok. I guess this is her debut. As she leaves, Peter thinks she did something crazy to his Spider Sense, while she asks an unseen entity if she must destroy him, but apparently gets a “no” and moves on. We cut to The Everglades for the Evolutionary War portion of our show, a bunch of The High Evolutionary’s Eliminators setting up some kinda gizmo in the swamp.

Hey, it’s Man-Thing! I guess Gerber couldn’t resist. Whatever that thing is doing is damaging the swamp, and thus also damaging Man-Thing, who sort of collapses into goop. Meanwhile, let’s get meeting The Slug out of the way… Guess who he’s talking to!

We cut from that to the housekeeper getting on a bus, still talking to someone no one else can see. But in her reflection, she sees a woman with red eyes telling her that they have work to do tonight. Back in the Everglades, the goons are losing their minds as the sky literally start bleeding on them. As they suffer, The High Evolutionary telepathically tells them it’s for the good of the human race.

Poor Man-Thing. Meanwhile, the as-yet-unnamed housekeeper gets home to her son Carlos, and after some nice family moments, tells him he’s staying with Maria tonight. Speaking of tonight, it is now night time, and Peter Parker’s out looking for a hamburger. A guy wants to sell him drugs on the street, pretty forcefully, but Peter presses on to a diner. Out the window, though, he sees the dealer being assaulted by someone, on behalf of The Slug, as it turns out. The guy asks the dealer where he’s getting his stuff when Spider-Man appears.

While they chat, the housekeeper gets out of the shower and puts on a skull necklace, and the voice in her head calls her “Poison.” Back to Spidey, as he swings away thanking Santo for the info. But as soon as he’s gone, The High Evolutionary’s goons show up and “purify” Santo. Ouch. Speaking of ouch, The Slug is once again talking to Kingpin, saying Santo wasn’t their only lead on the drugs he was selling as he smothers a man to death in his fat, like he said earlier. Sheesh. This comic is moving just as fast as the ASM Annual did, it’s hard to keep up. Next page:

The green voice keeps guiding Poison, aka Cecilia, as she demolishes the goons. Unfortunately for her, her son is seeing the whole thing. Then the green voice says to take it to the place where its world and hers merge. The next day, we catch up with Spider-Man, who’s contacted The Miami Tribune and used their resources to get to The Everglades, promising them any pictures he might get, because this is where Santo said he gets his drugs. And he soon finds the exact spot, a refrigerator chained up in the swamp, full of drugs. Spidey thinks he’s got quite the exclusive as a bunch of goons suddenly run up on them, but then those goons ae mowed down…

Spidey’s being awfully cavalier about these dudes killing each other, but he finally jumps in and fights the armored ones. Nearby, Poison reaches the spot the green voice was leading her to, saying she’ll be relieved when it’s gone. Then it takes control of her body.

Aaaalright. This somehow seems to also help Man-Thing, as he pulls himself back together and shambles toward the Purifiers to get some revenge, or as close to it as a mindless plant monster can. Those guys are still in a 3-way fight with Spidey and the drug dudes, but it’s about to be a 4-way fight.

Spidey turns the assembled goons over to the cops, goes to his hotel and crashes. The next day, he’s awakened by MJ, who’s come to join him on his trip. How nice. The End. Another breathless mad dash of a plot. The Slug sure didn’t have much to do for being on the cover. Much like the ASM Annual, this one’s 2nd feature is a solo story about the new hero introduced in the first, a Poison joint by Gerber, Alex Saviuk and Janet Jackson. Apparently the thing possessing her was called ”Ylandris,” and first came to her when she was dying of an illness, both of them in need of the other. She hunts down a guy who did her wrong in her story, but chooses not to mess him up and be better than that. Ok. Then there’s a “Spider-Man Year in Review” section, featuring pin-ups of important moments by big names, like the wedding by the Romitas, 3 pin-ups for Kraven’s Last Hunt by Zeck & McLeod, Zeck & Joe Rubenstein, and one by Mike Harris. Cynthia Martin does one for her Mad Dog Ward story. There’s a now famous Todd McFarlane one about him returning to his red & blues, and a whole bunch more is recapped.

Covering a couple of things I don’t even own down thee, how helpful. Who is the king here? The black suit? I am stumped. And the rest of the book is another part of the High Evolutionary serial running through all the annuals. I wonder if every annual’s main story was a super-rushed info dump like these two we’ve seen? The TAC one is the only one I’d previous read, and when we get to it, we’ll see that it’s a little different, but still moves at quite a clip.