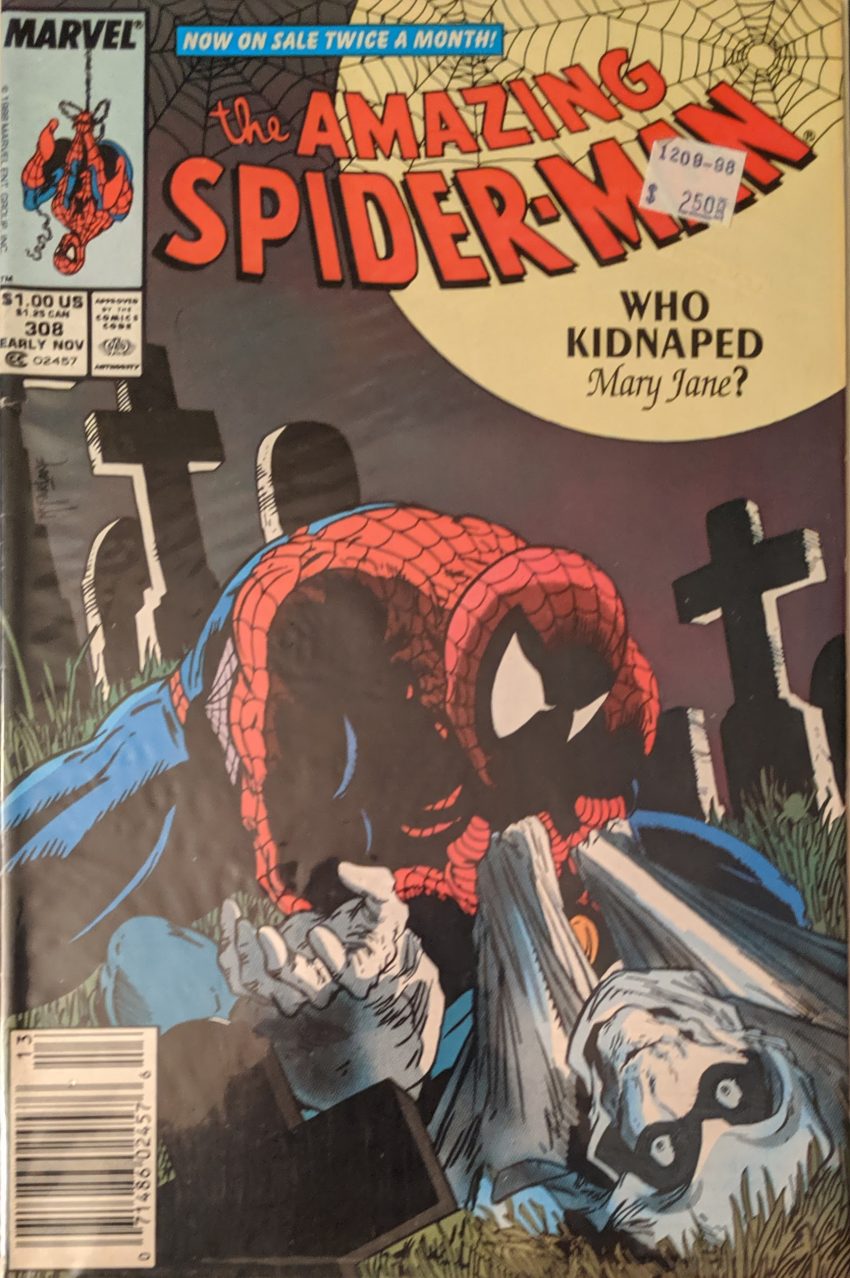 A cover that’ll make you go “…Is that Taskmaster? Why is his face… like that? Is it him?” Anyway, the cops are at Peter Parker’s place to investigate Mary Jane’s disappearance, and they’re lead by Sgt. Michael Tork, for some reason. Tork’s a “play by his own rules,” “loose cannon,” “other cliches” tough guy cop who’s appeared in a lot of places around the Marvel U (Including earlier issues of ASM), and doesn’t seem like the guy you want on this case.

Feel the 80s comin’ off that page! When the cops leave, Peter beats himself up in his usual fashion, sure someone has figured out he’s Spider-Man and kidnapped MJ in a bid to get to him. Unbeknownst to him, she’s elsewhere in the same building, being held captive in Jonathon Caesar’s specially designed prison apartment. I mean, I get that he’s crazy, but this doesn’t seem terribly well thought out.

So, yeah, dealing with a real crazy guy here. He keeps talking about how he’s learned to manipulate people over the years, then about how he’s been hoping to kidnap her ever since he first saw her on a magazine cover, and thus made sure she & Peter were able to get a place here. After talking about how they’ll be happy in their new life together, he and his goons leave her alone in what we’re told is a soundproof room with an unbreakable window. Meanwhile, Spider-Man is out shaking down crooks trying to get a lead on her. One informant says he might be able to bring back some info in 24 hours. The next day, Peter’s not doing too well. His publicist Ginny is with him, trying to help, but who could? He wants to cancel is book signing in in Queens, but then Aunt May calls to say how proud and excited she is, and he decides to go through with it.

Well, that’s not entirely true, caption. MJ may not know Felicia’s back in town and looking for Peter, but they’ve met a couple of times. Later that night, Spider-Man is in a “derelict graveyard” in Brooklyn, having been told by his guy that someone out for revenge on Spider-Man is based here. He thinks he’s been played until a bunch of goons show up and start shooting. He has no trouble with them, of course.

Keith Pollard has been slighted by these tombstones! McFarlane’s take on Taskmaster is only slightly less weird inside than on the cover. Taksy wants to explain his whole supervillain deal, as they tend to do, but Spidey’s not in the mood, slinging a tombstone at him and demanding to know where MJ is. But Tasky vanishes, and Spidey has to force one of his goons to tell him their base in a fortified mausoleum across the way. He smashes his way in demanding Mary Jane Watson-Parker. TM says he’s never heard of her, but Spidey’s in time to help him train a bunch of new recruits.

Not that all his fancy moves help him. So Tasky sets off a flare in the room, which is full of munitions, and runs for it, once again saying he doesn’t know about MJ, and if he did, he’d be rubbing Spider-Man’s nose in it. Spidey realizes that’s true, and this has all been for nothing. He escapes the exploding base, waits for the fire department to show, and then dejectedly heads home, never guessing MJ is in the same building. Will our hero find his missing wife? I mean… probably. But how? When? Come back next time.