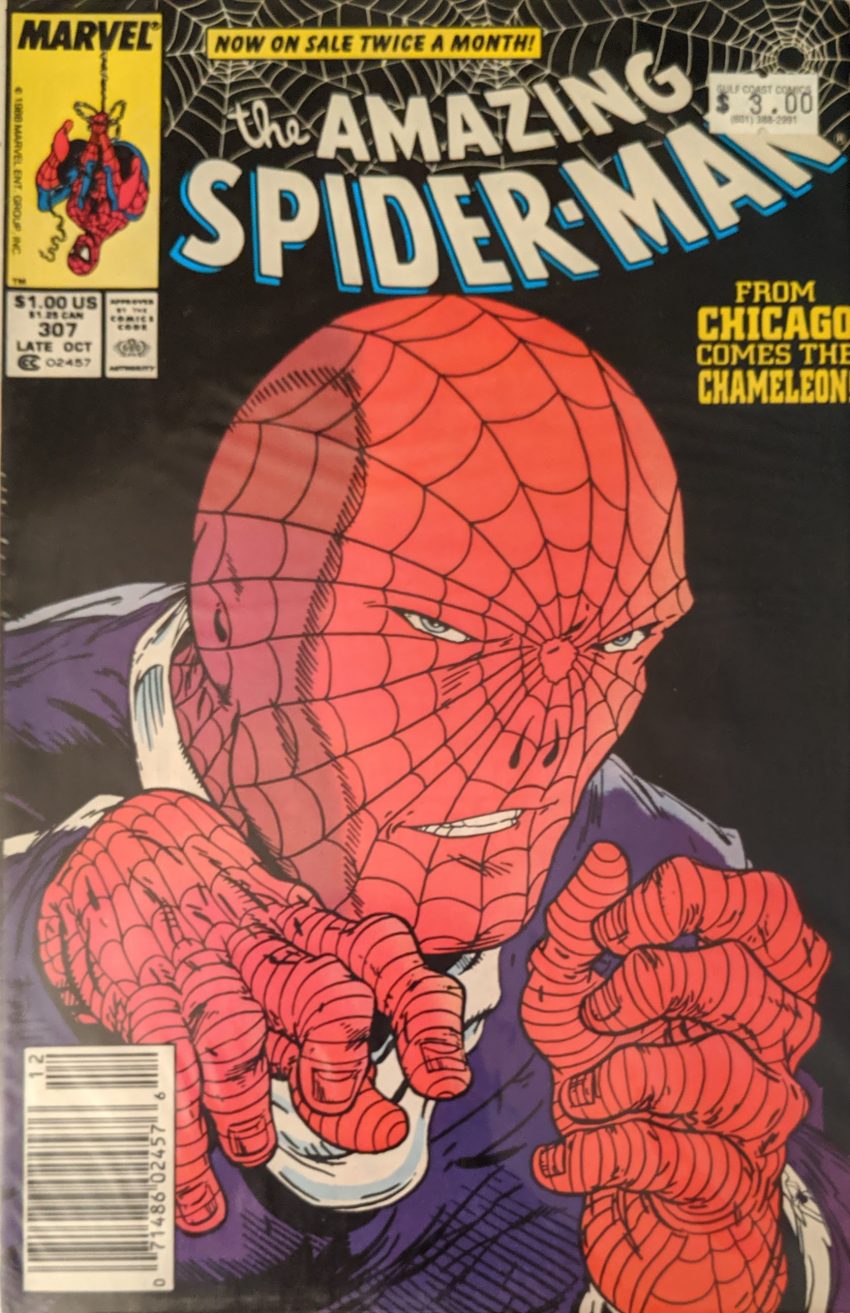 $3, what a bargain! Our story begins with Peter & Mary Jane out grocery shopping when someone calls out to them.

Remember how MJ was worried about that lingerie shoot in Web? /shrug Maybe that’s this, I dunno, I assume “Shape” would have a bathing suit on the front. Anyway, Irving & MJ head home and start unpacking their groceries when that creepy Jonathon Caesar drops by to see if he can help MJ with anything while Peter is out of town. When he finds out Peter is not out of town, he quickly departs.

Todd McFarlane’s artwork can be questionable pretty often, but he sure nails the “extremely creepy stalker” face. Wonder when and why they made a statue of her. Maybe he made it. At any rate, Peter is going out of town this evening, and the next day he’s in Chicago. After some sightseeing with his publicist at the Sears Tower, it’s time for his book signing.

(Felix the Cat) Peter sure is having a good time. Elsewhere in Chicago, we visit the offices of William Dukane, who, as we saw last issue, is currently being impersonated by The Chameleon. Dukane’s employees note that he’s acting very strange lately as he heads home early for the day. When he gets there, The Chameleon taunts the real Dukane, tied to a chair and being kept alive by IVs, before watching the silent Phantom of the Opera to unwind. Fun guy. While he’s chilling, he reflects on his past exploits for your benefit, because somewhat incredibly, this story is his first appearance since ASM 186! Spidey’s first supervillain really fell off the radar for awhile. So he recaps some of his past defeats (McFarlane has to draw that hideous costume from 186) before getting to his new deal.

That sounds laughable, but on the other hand, this makes him much more of a chameleon than he ever was before, so it’s a good upgrade for him as a villain. With the aid of his computerized belt buckle, he can change his face and clothing to hundreds of preset personalities, as well as scan new people and add them to the list. So now he’s ready to bring about his ultimate goal: “the utter destruction — politically, economically, and strategically — of the United States of America!” I mean… ok. If the entire Soviet Union couldn’t pull that off, I’m not sure a guy with a silly putty face can do it, but we’ll see. The next day, Peter attends a science expo where he’s being named an honorary citizen of Chicago by the mayor (what? why?), but he’s more excited to see famed scientist Dr. Edmund Debevic speak. And so is The Chameleon, who’s hired some goons to fake a robbery as a distraction for him to kidnap the doc. And when they burst in, guns blazing…

While Spidey takes down the goons, Chameleon makes off with the doctor, disguised as a police captain. Spidey hears the captain dragged the doc off, and also that the police radio says the captain is still downtown, and springs into action. Nearby, Chameleon has Dr. Debevic handcuffed in a closet while he steals his identity, saying he plans to distribute the doctor’s research to foreign powers. But then Spidey comes through the door.

Chameleon gets out on the street, changing appearances repeatedly, but Spider-Man’s on him thanks to the tracer, so he steals a cop’s gun and herds a bunch of hostages into a movie theater. Unfortunately, he notices the tracer on his arm, and lets everyone go, vanishing into the crowd. Spidey realizes he’ll never find him now, so he switches clothes and rejoins his publicist. At least he foiled The Chameleon’s plan… even if he never found out what it was. Meanwhile, back in New York…

Egads! I’ll say this, it’s at least kinda cool that they came up with a way to endanger MJ that had nothing to do with Spider-Man. Her being in trouble is almost inevitable now that they’re married, but it’s not Doc Ock randomly grabbing Spider-Man’s wife by accident, at least. Also, I’ve been talking about how the cheesecake stuff with MJ was going to ramp up, and there you go. A symptom of the era, one that will only get worse. Well, anyway, come back next time to see MJ get killed probably.