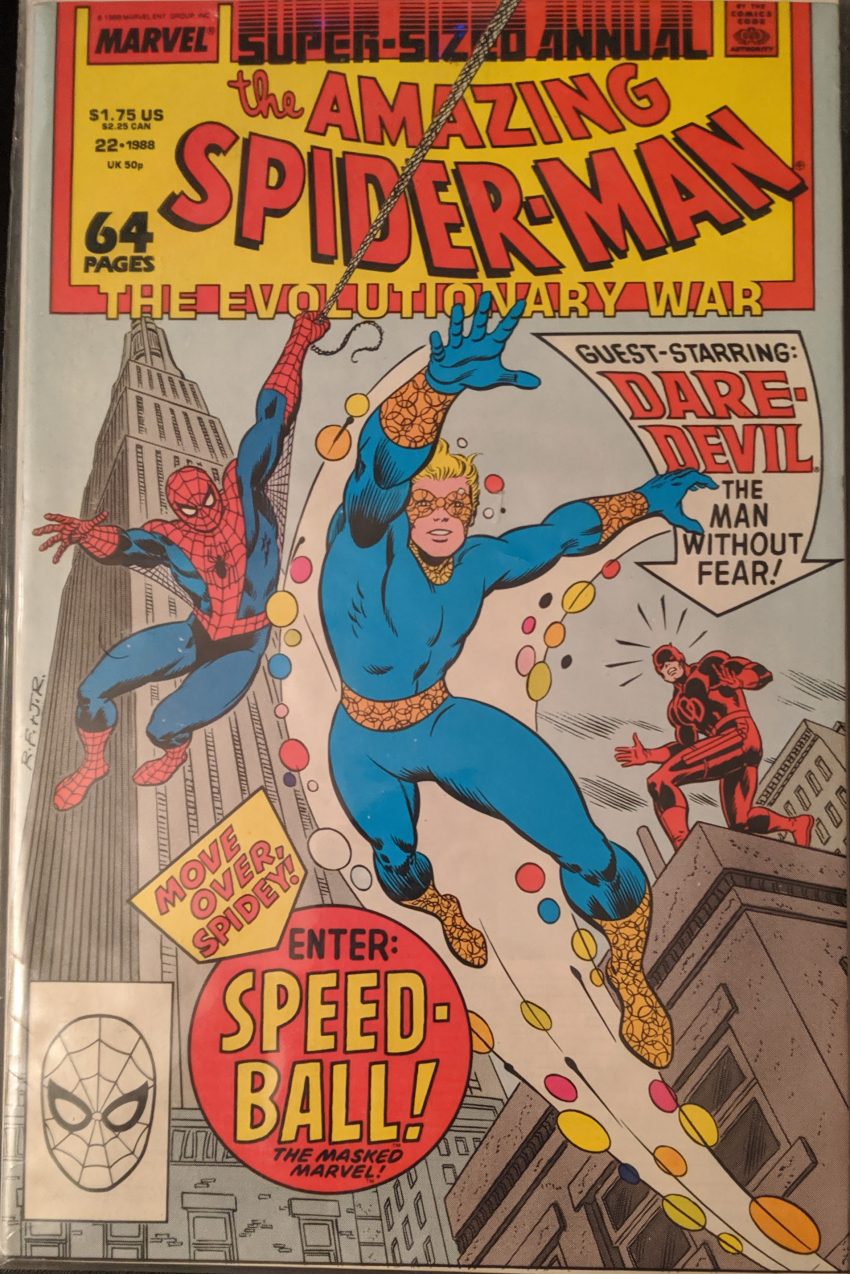 Move over, Spidey, it’s Steve Ditko’s most embarrassing creation! Boy, the hoops we’re about to jump through behind the scenes. As I think has been mentioned previously, Ditko returned to Marvel in the 80s, crazier than ever. He refused to work on his 60s creations, and also to work on any hero with any sort of shades of gray to him. His objectivist beliefs meant a hero is a hero and a villain is a villain and that’s IT. So he wound up doing a lot of toy tie-ins, because there are no moral quandaries for Chuck Norris and his Karate Commandos. One of the fathers of the Marvel Universe, co-creator of the greatest superhero of all time, drawing ROM: Spaceknight and what have you. But now he’s created one of the worst superheroes ever, and Marvel goes and debuts said hero… in a Spider-Man comic. In a Spider-Man STORY. A Spider-Man story Steve obviously wouldn’t have anything to do with! Ye Gods. Don’t worry, Ditko gets to do a Speedball solo joint as the 2nd feature in this annual, but our first introduction to him is not that. Additionally, as the banner indicates, this story is wrapped up in The Evolutionary War. Marvel went through a phase where all the annuals told a single, super long story. I believe it’s just ‘88 and ‘89. The one from ‘89 is more (in)famous. So this will be one of 3 tie-ins to The Evolutionary War.

It’s Speedball co-creator Tom DeFalco and David Michelinie sharing the writing credit (I’m guessing plot and script, respectively), winner of the Marvel Try-Out Contest and future Spidey superstar Mark Bagley (On maybe his first Spider-Man comic?) as penciler, good ol’ Mike Esposito on inks and Bob Sharen holding down colors for this feature. It begins with a weird assortment of people in a warehouse. Some very comic book-y street gang looking guys and some suited guys who are I guess are their bosses or drug suppliers or something, and one of them is reading a Bugle so he can tells us “the drug war” is heating up. They’re not alone, though.

It’s weird, the people all clearly look like Bagley drawings, but that’s not his Spider-Man. Not yet. Spidey webs up all the guys, retrieves his camera, and then tips off a beat cop to go check out that warehouse. Elsewhere in New York, one Robbie Baldwin is going to see a play with his mom, but he seems really uncomfortable. Guys, that’s Speedball! Or it’s gonna be. We only see them for 2 panels and flit away to see the webbed goons discovered. But not by the cops. Rather, a scarred mobster who happily calls himself “Splitface Flanagan” has found them, and his intentions seem pretty bad. But we cut away to the home of Peter & Mary Jane, and when the former shows up, the latter is really worried.

Wanted for murder! Been awhile. The next day’s Daily Bugle has a feature by minor Daily bugle reporter Charlie Snow interviewing the beat cop, who turns out to be Raphael Scarfe, of all people, Misty Knight’s old partner (As seen on the Luke Cage Netflix show). The Bugle is being read by Matt Murdock, who thinks Spider-Man is gonna need his help to clear his name. Matt’s been through a whole lot since his last appearance on the blog, and is currently running a free law clinic in Hell’s Kitchen. Long story. At The Bugle, Peter is asking Ben Urich what else they know about the murders (Why not ask Charlie Snow?) when a jubilant JJJ shows up to congratulate Peter on helping prove Spidey is a killer. He’s so happy he gives Peter one of his cigars. Then we switch scenes for a 3rd time in 2 pages to The Kinpgin’s office. Kingpin is telling unshown underlings about how some guys in flying supersuits are disrupting his drug operation (As seen in Punisher Annual 1), and he can’t have that. Then we switch scenes again. Whew! Nothing lasts longer than 2 pages in this comic! Now it’s night time, and Spider-Man has gone back to the warehouse to try to figure out what happened. DD is there waiting for him.

Elsewhere, Robbie Baldwin doesn’t want to go to the cast party for the play he saw with his mom, who apparently knows some of the actors. Robbie goes back to the hotel, saying he has a lot of thinking to do. Meanwhile, Kate Cushing informs JJJ that opinion polls indicate most people support Spider-Man, thinking he’s a hero for killing those goons, and Jonah can’t have that, so now he says The Bugle has to prove Spider-Man is innocent. I am getting whiplash from the speed at which this comic is moving, my goodness. We’re back with Robbie, who is walking and thinking everything has been different since the accident when he gets mugged. And then, well…

Speedball. That’s his thing. He bounces around. Like a ball. Like a speed ball, I guess. Woof. He bounces up onto a roof just as the armored guys Kingpin was talking about show up and kill his would-be assailants. Speedball decides to follow the armored guys to make sure they don’t hurt anyone else. Then there’s this old chestnut:

Then we’re off to Kingpin’s again. His guys have caught one of the armored guys, and when he won’t talk, Kingpin breaks some of his ribs, making him pass out. Alright, too late, we’re off to see Speedball again, as he reveals to us that the armored guys are this story’s connection to The Evolutionary War.

That’s The High Evolutionary, an extremely confusing and weird character and the guy behind this event. Robbie calls the cops, but of course, they don’t believe him. Across town, Kingpin has beaten the same info out of his guy, and wants to get it to Spidey and DD so they can unwittingly help him get these Purifiers off his drug dealers’ backs. So the next time the heroes go bust up a seedy bar, things are different.

…The Empire State Building, of course. Another newspaper headline tells us the cops have also been tipped off (And the leader of the slain drug dealers was named Dylan Thomas? Wut?). So we go to The Empire State Building, and Robbie Baldwin is there, too, thinking he has to do something. Spidey and DD burst into the Purifiers’ lair and do their thing, while outside, Robbie spots a weird antenna he bets they plan to use to broadcast their “sleep ray,” and turns into Speedball to smash into it.

Hooray, I guess. But Speedball’s momentum takes him right over the side of the building, seemingly falling to his doom. That’s no way to begin your superhero career, though, so it’s no surprise when a web shoots down after him.

Soon, The Arranger and a squad of Kingpin’s goons descend on the office of Splitface Flanagan, telling him he can either confess to the murders or become one himself. Thus, the next day’s Daily Bugle is about how Spider-Man has been exonerated. Peter Parker is happy things have worked out, when he runs into someone.

And… that’s our show. That was insane. So much comic in so little space. I’m exhausted from reading it. DeFalco was just trying to serve too many masters. Introduce Speedball, throw in Daredevil, tie into the bigger storyline, a gang war, Kingpin… way too much for one comic.  It’s followed by a Speedball feature by Ditko with a script by Roger Stern which STILL doesn’t explain Speedball’s origin. That’s left to his upcoming (Very short lived) solo comic, I guess. Speedball would then go on to join The New Warriors, a surprisingly long-running 90s team co-created by one Mark Bagley. I know! The New Warriors will eventually appear on this blog. Then there’s a floor plan for Peter & Mary Jane’s apartment by Janet Jackson (Still not that Janet Jackson) and this issue’s part of a serial about The High Evolutionary appearing in all the annuals, and we’re out. The Evolutionary War rages on. The next installment we’ll see is one I’ve not read before, so that should be interesting. First, though, it’s back to ASM.