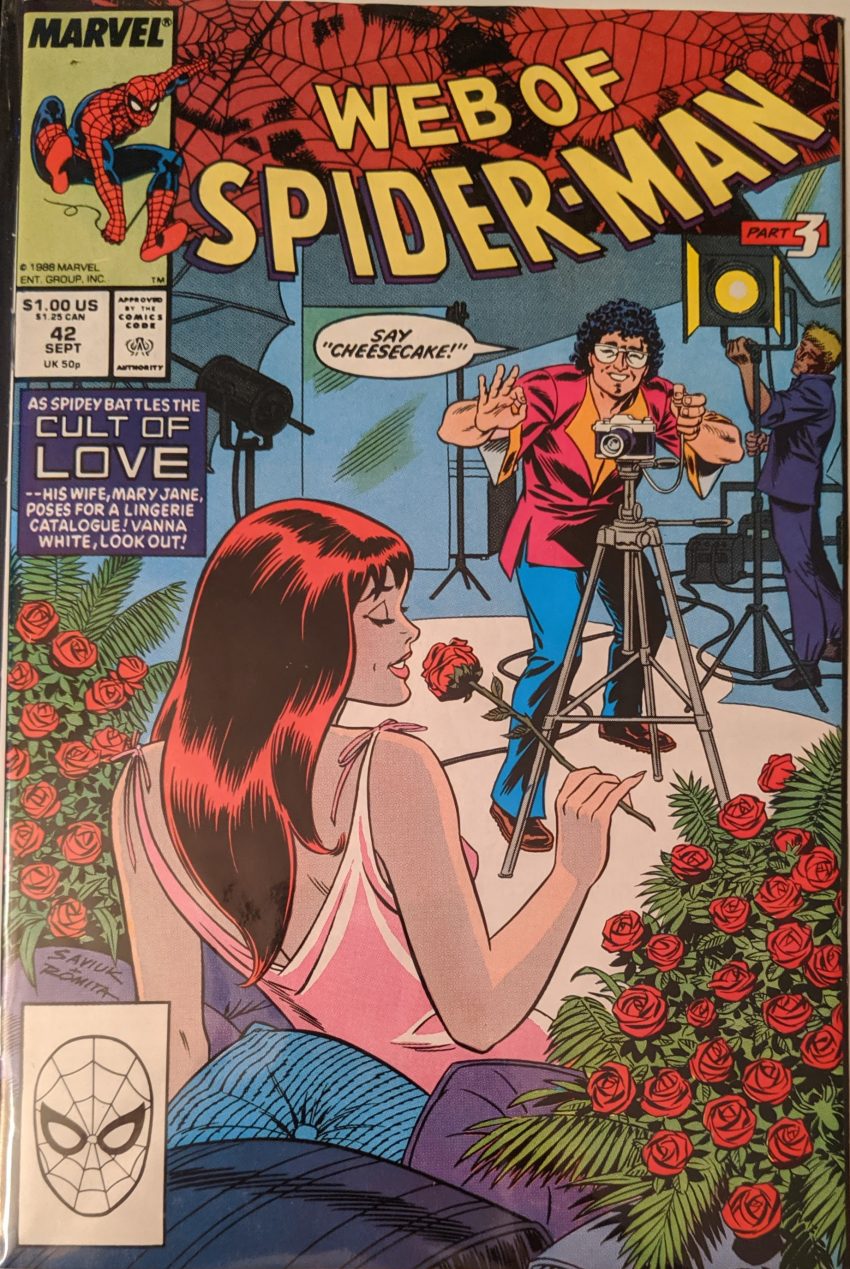 I guess that’s one way to sell comics to the adolescent boys who made up the majority of the reading audience at this time. Ol’ Jazzy Johnny had to step back in for this one. Saviuk is already heavily inspired by him, might as well. At any rate, welcome back to the adventures of Peter Parker: rube! Do the nature of comics in the period and the unusual ending of last issue, this one has to open with a brief summary of the “teacher’s” performance, and how Peter seems taken in by it. Reverend Tolliver tells Ben & Flash that even really smart people can be fooled by a good charlatan even as Peter starts to wonder if what he saw is real, and thinks that, if it is, how could he drag Betty away from such a wonderful place? Do you not recall being attacked with an improvised flamethrower by one of these loving cultists last night, dude?

Uh-oh. Meanwhile, MJ has gone to the lingerie shoot, but unlike the cover, she’s super uncomfortable and bails, embarrassing her old friend we never met before last issue. Never trust a white man with a Jheri curl mullet, MJ, good call. Elsewhere, Ben & Flash leave the reverend’s apartment and go their separate ways, Flash implying that he’s gonna go get into trouble with the cultists. Speaking of whom, we rejoin Peter & “Teacher” taking a walk. The bossman says he knows everyone here, so it wasn’t hard to figure out that the one unfamiliar face was Spider-Man. He’s got you there, Pete-o. But when Peter asks if he’ll order his goons to attack, the “teacher” asserts that this is a place of love, and says Peter is someone who could use some guidance.

Soon, Spider-Man is swinging toward The Daily Bugle, thinking he kinda wishes this one was lead by a supervillain he could punch out instead of a nice old man. He finds his clothes on the roof have been made into a bird’s nest in typical Peter Parker fashion, and then heads inside to see Kate Cushing & Ben Urich.

Peter, you absolute idiot. He calls MJ, who wants to talk to him about this whole lingerie deal, but whoever’s phone he’s using at The Bugle gets mad and wants him gone, so he says it’s her career and she’s good at it and whatever decision she makes is fine by him. MJ is not thrilled by the abrupt ending of their call (He didn’t even explain someone was forcing him off the phone), and makes her decision.

That’s a lot more tasteful than this kinda thing is gonna be under other artists, lemme tell you. While MJ does her thing, Peter finds Flash coaching a kids’ basketball game, maybe not very well, but when the kids see Spider-Man, they start falling all over each other.

That joke about the more famous comic book Flash was pretty good.

Spider-Man, you absolute idiot. Flash begs his cop buddy for the cult’s address. He’s made to promise he won’t do anything illegal as he’s planning something illegal. Meanwhile, at the cult, Betty is feeling conflicted. Seeing Spider-Man got her thinking about the real world, and thinking people must miss her. But don’t worry, the pyromaniac guy is there to talk crazy at her and convince her to stay. While he does, Flash as returned to the reverend, and they begin hatching a plan to rescue Betty. And Spider-Man? He’s gone to see Doctor Druid, who I think is an Avenger at this time, and a powerful sorcerer. Spidey’s looking to him for help. Then we catch up with Flash, who’s in a van headed for the cult compound with a bunch of jackbooted thugs. This escalated quickly….

Wow, ok. While… some random dudes are doing paramilitary stuff at the compound, Spider-Man is brooding on top of one of the Twin Towers. Dr. Druid told him the same thing the rev said earlier, that a good faker can convince pretty much anybody. He offered to help, but Spidey said he’d handle it. He decides to go home and finally catch up with MJ, but she’s not in yet, and while he’s there, Flash calls sounding crazy and telling him to get to Flash’s place as soon as he can. He just misses MJ as he swings off.

This sure went pear-shaped. Spidey’s the one supposed to be doing the vigilante justice around these parts, guys. Come back next time for the maybe-stunning conclusion to this bizarre storyline!