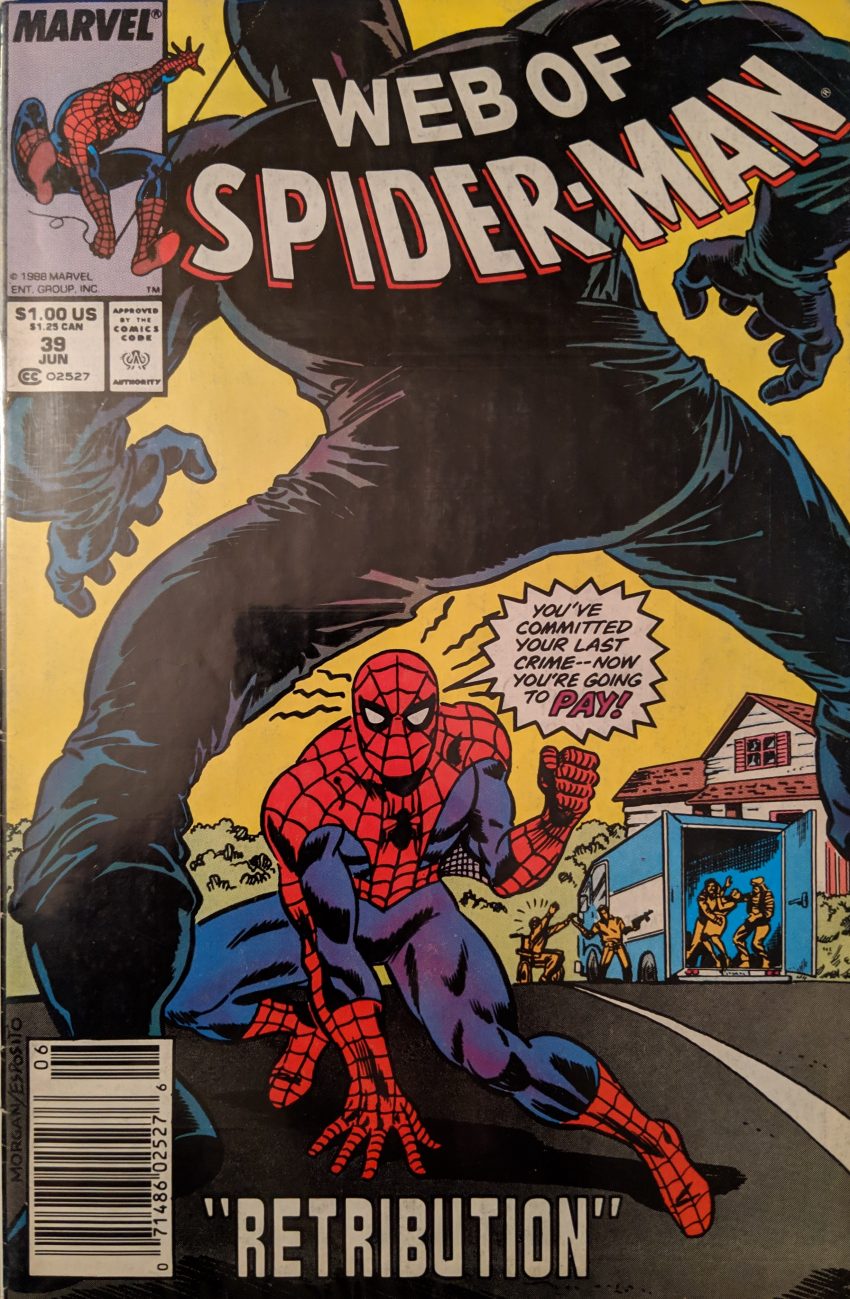 Welcome back to 1987! In case all the time travel has you lost, we’ve returned to the time when Peter & MJ are still newly married, Venom just debuted, and Spider-Man is permanently & exclusively back in the red & blues for the first time since 1983. It’s been 21 issues since Spidey wore his original colors in this title, just in case you were wondering. It’s the 2nd of 2 fill-in issues by Fabian Nicieza, still drawn by Alex Saviuk, inked by Keith Williams & colored by Janet Jackson (still not that Janet Jackson). Nicieza’s last issue was a wild ride, let’s see what he’s got for us this time. It begins with a homeless woman being mugged. Lucky for her…

So, for reasons we’ll get to someday, Spider-Man is wearing a store bought version of his costume from Germany. Weird, I know. While Spidey is webbing up the mugger, the lady finds a loose string on the suit and starts unraveling it with remarkable speed. Spidey sees his costume is being destroyed and swings away. Meanwhile, our pal Nathan Lubensky is leaves his apartment to go get the paper. He’s not currently living at Aunt May’s boarding house for Reasons. One day. He gives his change to a homeless guy he knows named Norton, and then he’s off on his way, so the homeless guy, Norton, walks over and rips the whole front door off Nathan’s apartment. Huh. We cut to Peter Parker trying to sew his spider-shirt back together as MJ comes home. She is not impressed with the disintegrating suit.

Elsewhere, Norton the burglar tries to pawn a bunch of Nathan’s stuff, including an engagement ring he bought for May, but the pawn shop guy recognizes it’s stolen and wants no part of most of it. Norton gets $20 for some cufflinks. Peter goes to see Aunt May, who asks him to go check on Nathan. Soon he’s inspecting the incredible amount of damage done to Nathan’s door.

Pete & Nathan make up, finally, and Peter spends a few hours helping him get his place straightened out. As he leaves, he says he’ll see if he can dig up some leads on who did this. The next day, there’s a weird bit where Peter asks an off-screen MJ if his new suit is ready and she wordlessly throws it in his face, and then…

Spidey heads to Giovanni’s just as Norton is trying to sell Nathan’s watch. Norton panics and runs out, seeming to know Spidey in a more personal way than the average New Yorker. Spidey sees Nathan’s watch and runs out after him, but he’s disappeared.

Well, well. Been a very long time, Norton Fester, aka The Meteor Man, fka The Looter. Things don’t seem to be going so well. Back at Nathan’s, Peter returns the watch, and Nathan says “Norton will be happier about it than I am.” When Peter asks who Norton is and gets back “Norton Fester,” he remembers who that is. And he remembers that guy was stumbling around outside Aunt May’s last night. He tells Nathan Norton is The Looter, and to call the cops to Aunt May’s house, then runs out to do his thing.

They do some more fighting, Spidey trying to make sure the van full of people he cares about doesn’t get blown up while asking Norton if he’s Meteor Man or The Looter now. Fester says it doesn’t matter anymore and keeps trying to kill him as the cops show up.

Norton gets real mad that they have a house and he doesn’t, and decides to kill them, but spidey recovers and is back on him. Meanwhile, Nathan has arrived, and is trying to get past the cops to get to Aunt May.

Well, that’s sweet. I always liked Nathan. All’s well that ends well. Next month, the new regular writer of Web debuts, except… well, don’t expect a long stay. In the letters, editor Jim Salicrup mentions that the guys MJ called to get Peter a new suit are the real world designers who made Marvel Superhero costumes for the Macy’s Thanksgiving Day Parade. So they actually have made Spider-Man suits. That’s pretty fun.