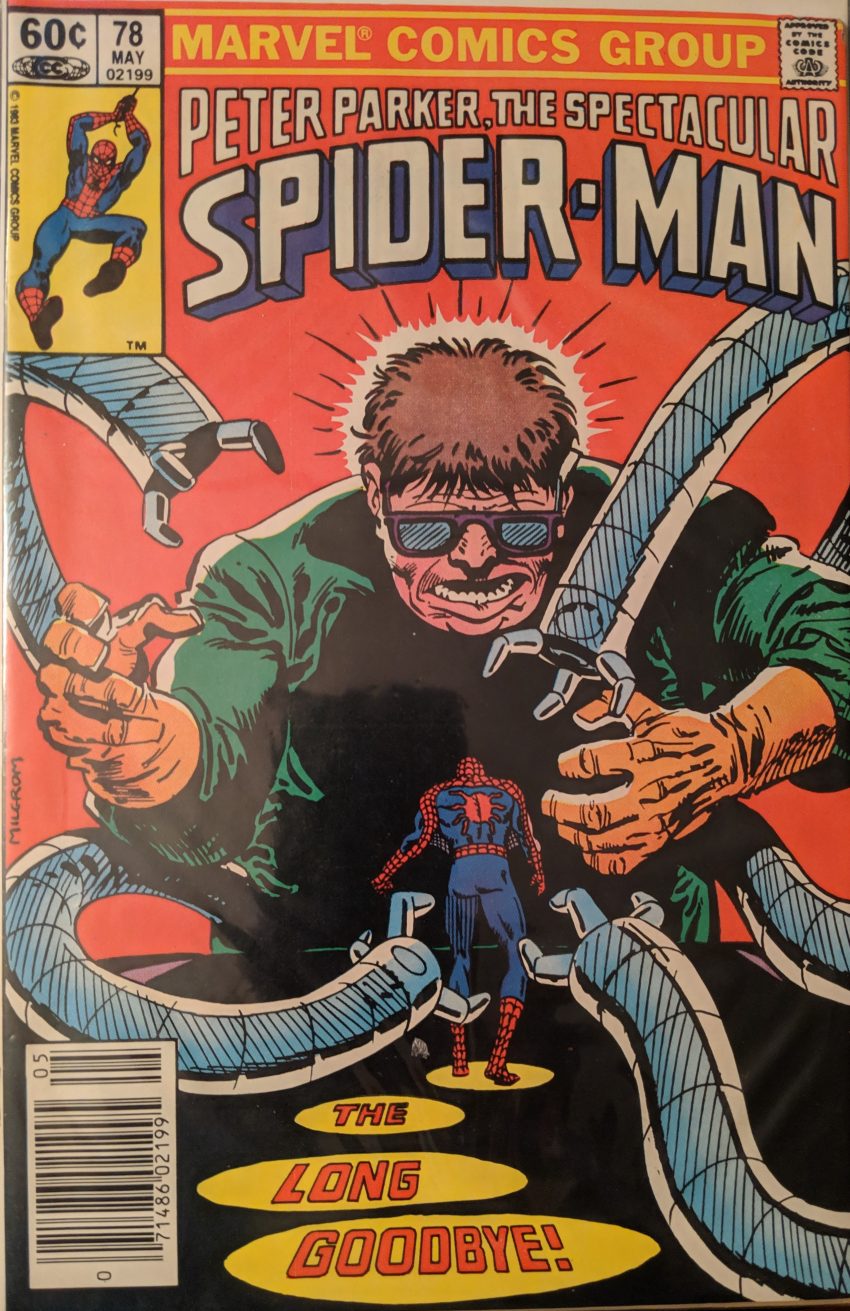 So we pick up early the morning after last issue. Doc Ock said he’d come kill Spidey & The Black Cat tonight, but there’s a whole day to get through first, and it begins with Spider-Man sneaking into the hospital past an army of police to bring flowers to his beloved. But even standing on the ceiling, he somehow trips an alarm, and Jean DeWolff and some cops rush in.

DeWolff leaves to give Spidey & BC some time. Felicia tells Spider-Man about a dream she had about walking through a dark vortex in her costume when she met her father.

Felicia declares that she’s going to go straight from now on. No more burglaries. She knows she can’t be with Spider-Man otherwise. Then her Mom walks in, saying she’s been here every day since she was hurt even though we haven’t seen her. Spidey takes his cue to leave. He thinks about how he’s done nothing but fight and guard Black Cat for days, and how he better try to get some money, so he heads to The Bugle, where Robbie is expecting him. He tells Jonah he’s got shots of Spider-Man fighting Doc Ock, The Owl, Gladiator & Vermin (even though the only thing we’ve seen him get shots of is the car chase in ASM), and says he nearly died getting them and demands top dollar. When JJJ objects as always…

Well, alright, then. Peter goes to campus, I guess to check his grade on that final, where he runs into the entire cast of TAC in a rare appearance, but when Dr. Sloan chastises him for not taking school more seriously, Peter says he doesn’t care about grades right now, that there’s a whole world outside this school and he’s gonna start living in it. As he walks away, be begins second guessing his outburst immediately. Meanwhile, Doc Ock is wandering around in the sewer? Ranting about killing Spidey & Black Cat. Ok. Not sure why he’s down here. Then some crazy looking people come out of the shadows asking him if he’s their king. Whaaaat?

We’re seriously just gonna gloss over this? Who are those people?? I guess… we’re not getting any answers. What in the world. Back at ESU, Peter is still there in spite of his little tantrum, and he runs into the entire ASM supporting cast of Flash, Sha Shan, Harry & Liz. They’re there for some kind of alumni fundraiser and were hoping to run into him. He agrees to go to lunch with them, worried he may never see them again after his upcoming fight with Ock. Then we cut to Boomerang being delivered to prison, and he’s still in his costume… which is covered in boomerangs… you know, his entire gimmick? And they just let him keep them as he goes into his cell. Absurd! Quick cut to Doc Ock still ranting in the sewer, then back to the prison, where Boomerang is intimidated by the prisoner across the hall, who happens to be The Punisher!

Man, a lot going on. Like, for example. The Last Supper…

Like, right on the nose! From there, he’s off to see Aunt May. I guess he really expects to die tonight?

Weird. As night falls, he returns to the hospital, saying he’s officially said good-bye to everyone in case he doesn’t make it. As he discards his clothes and runs up the side of the building, Ock emerges from the sewer. Spidey checks in with Jean DeWolff, and then she shoos all the cops out of Felicia’s room to give she & Spider-Man some privacy.

What an odd issue. This sort of countdown to destruction. Doc Ock is perhaps Spider-Man’s most dangerous enemy, but they’ve sure never had a build up to a fight like this before. A whole issue of preparation! Well, obviously, come back next time to see how it goes.