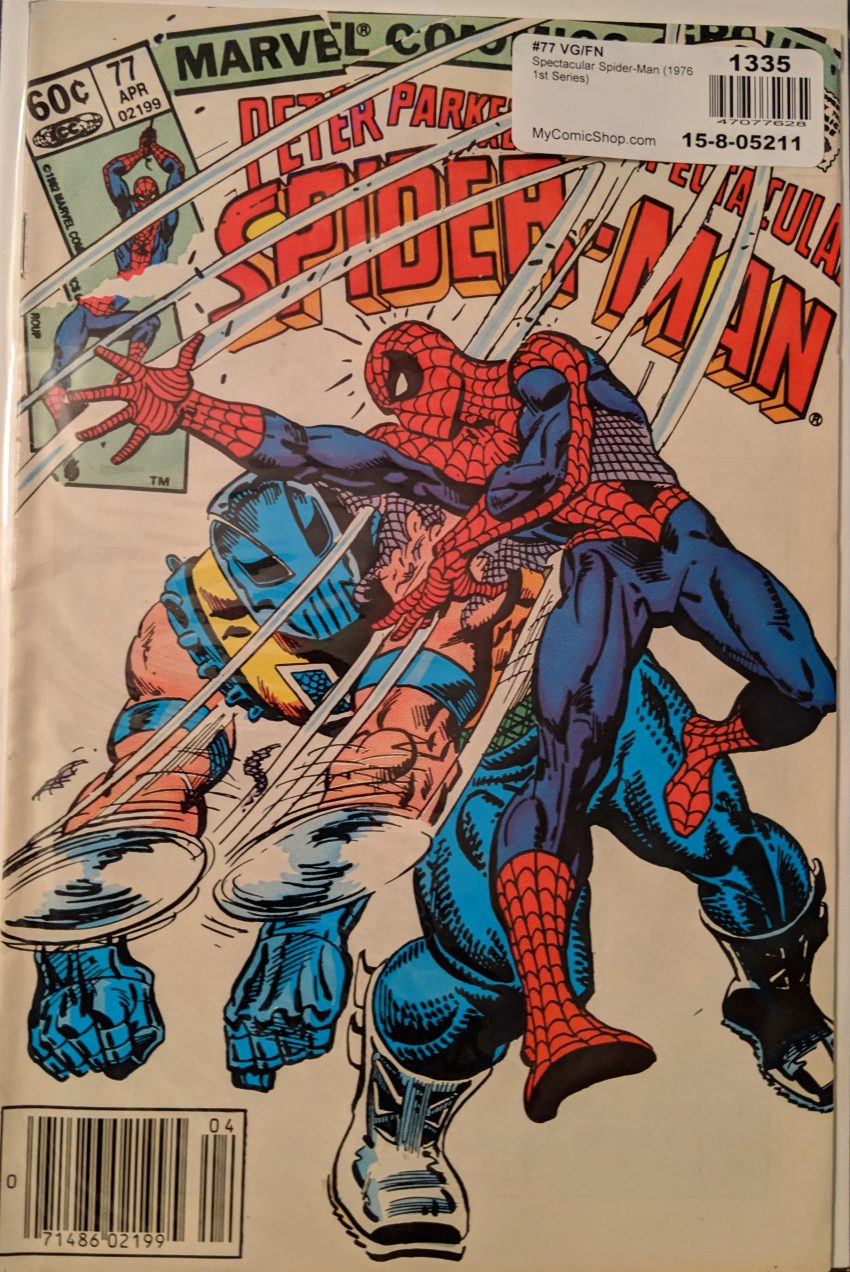 Alright. We took a break from this storyline to get caught up with the other titles, but it’s not over, so we’re back. And look, Daredevil’s sometimes friend, sometimes foe Gladiator is here. There’s unusual portraits of all the creators on the splash…

(Milgrom opting for his signature cartoon of himself)… and it gets weirder from there, with what seems like a conscious decision to draw like Frank Miller since we’re in what is currently his world…

A lot of unusual choices right at the top. Don’t think I missed that Batman costume back there, either, I just had a lot to talk about first. Outside, 3 goons are running from the cops, and one of them elect to shoot one of said cops to try to make them stop chasing, which is, like, a terrible plan. The hoods break into Melvin’s costume shop to hide from the cops among what are clearly Hawkman and Wonder Woman costumes, and it works. For the moment.

Our guy Melvin is really trying to put his life as Gladiator behind him, but he’s got some problems, and is easily confused sometimes. As he ponders the situation, we find Doc Ock, arms back on and screaming for vengeance, headed for the hospital Black Cat is in. Spidey is in her room with her, having a nightmare about fighting a much more literal Doctor Octopus as the real one approaches the window.

It’s gotta be pretty alarming for Spider-Man. His defeat of Doc Ock back in 75 was maybe his cleanest victory in their long history, and here he is, back already. Spidey slips out of his webbing and gets into it, but Ock says he’s just here as a social call, to them him & Black Cat know he’ll be back to kill them tomorrow.

Doc Ock rips all Felicia’s life support equipment loose, just to be extra-evil, and departs. Medical staff rush in, and the captions say for the 2nd time in as many days, he has to watch them help her. How can it only have been a day if all this was referenced in MTU and ASM? Ugh, this happens way too often. Jean DeWolff is out in the hall, saying they should move Felicia to a more secure facility, but Spidey thinks the move could kill her. Plus, Doc Ock said he’d be killing them tomorrow, so there’s nothing to worry about tonight. With that in mind, he takes off, to “get ready for the biggest battle of his life.” Swinging around to clear his head as usual, he happens upon a police standoff with the goons in Melvin’s shop.

With communication obviously so bad within the Spider-Office, I wonder how much heads  up the DD folks got for this. Gladiator’s buzz saw cuts down a big hotel sign, making it fall between the two factions, still not directly involved. But that’s enough for Spidey, who leaps in and surprise attacks him.

It’s all wrapped up, and the goons even admit they forced Potter to help them, but now that he’s having his Roman Empire delusion, things are gonna get worse for everybody. Spidey barely saves some cops from a buzzsaw to the head, getting cut in the back in the process, and begs Gladiator to stop, but it’s too late. Spidey flips around trying to reason with him and he carves a path of destruction through the neighborhood.

So, that didn’t work. Now Gladiator is moving inexorably toward the hoods to kill them, Spidey trying his best but failing to stop him.

How many stomachs you got, officer?

And that’s that. I knew Melvin couldn’t mess up too bad just from having read this period’s Daredevil. Weird little detour. Come back next time for what promises to be another one.