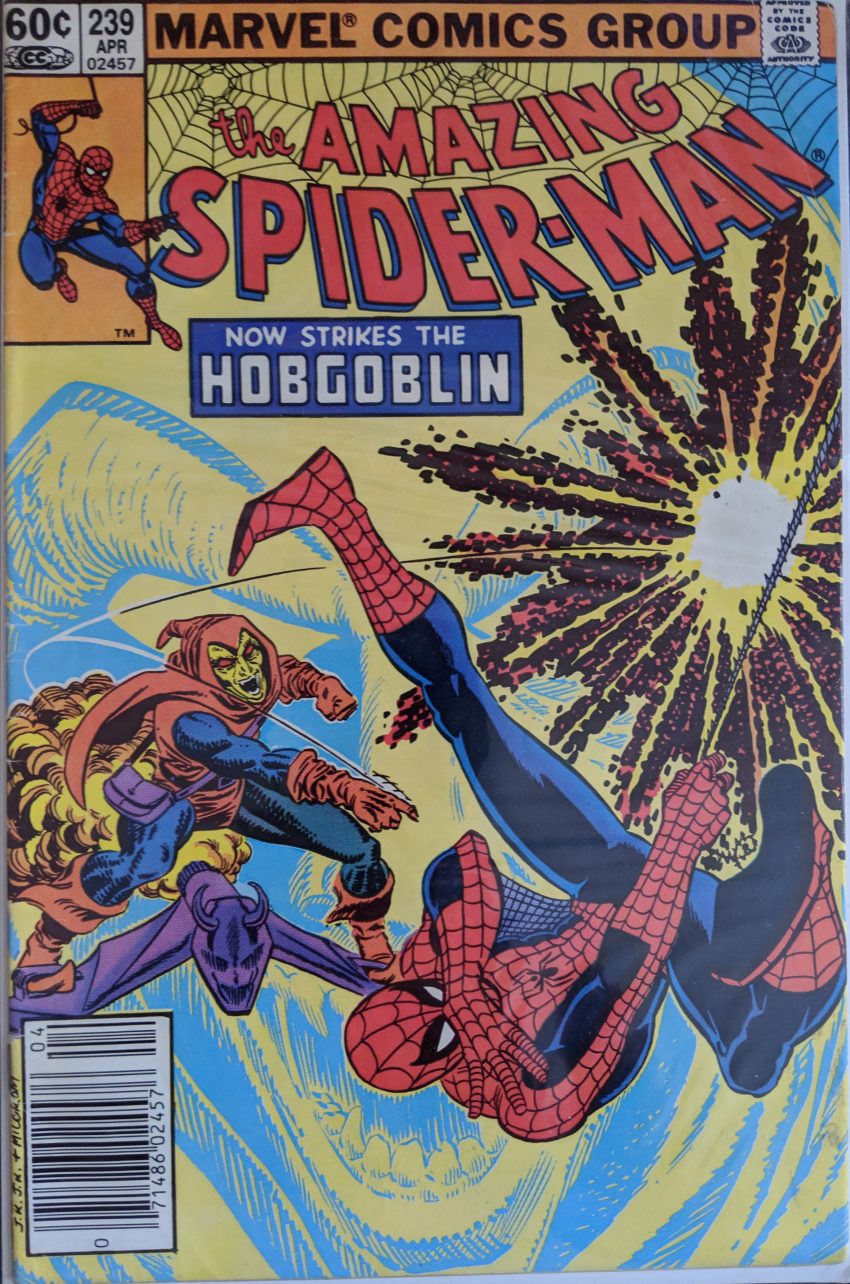 This is the 2nd appearance of The Hobgoblin, but for me, this is where it all started. Having been reading the ASM of my era, the late 80s, early 90s, the 300s by Michelinie & McFarlane, I was on a family trip, and we stopped at a gas station that was selling 3-packs of comics. This product was pretty common back then, 3 random contemporary books in a bag for $3 or something. I got one, probably because it had something I wanted in it. I couldn’t tell you what the other 2 books in it were, because for some reason, the middle one you couldn’t see in the package until you opened it was this. This is highly unusual. Those packages always had books from the last 6 months or so in them. This, like the books I had since I was a kid, was like a portal into another world, when comics were very different than the ones I was reading. By the time I was through this issue, still new to the world of comics and Spider-Man in particular, I had so many questions. I wanted to know more about this era and this character, and that began my years-long quest to collect the Stern/Romita run, my first comics mission. In a way, this blog probably wouldn’t exist without this issue getting me heavily into the back issue collecting biz. So let’s see what this momentous book has going for it to change the course of probably 12- or 13-year old me’s life. Frank Giaocia is here for inks and most likely finishes this month, as he and JRJR are simply credited as “artists,” and that’s usually what that means. As our tale begins, it’s midnight in New Jersey, and what will soon be instantly recognizable as The Hobgoblin’s battle van smashes through the side of an Osborn Manufacturing facility.

Look at the dome on Harry down there! Woof! Early the next morning, the mystery person who is The Hobgoblin buys a Daily Bugle and is amused to see he made the front page. As he heads back to his lair, he thinks he should buy more shares of Osborn Manufacturing “as a sort of repayment,” since they made all this possible. So, our mystery villain has shares in the company. Don’t bother trying to keep track of the clues, they aren’t going anywhere. The more our mystery villain learns about The Green Goblin, the more he can’t believe how many opportunities he squandered. Exhibit A at the moment being the battle van, which Norman developed as a mobile base and then just left in Jersey, unused. He thinks he has one last cache to raid, and then maybe he’ll see if he can beat Spider-Man where The Green Goblin failed. Speaking of whom…

It’s hard to explain what a page like this was to a kid who’d only recently gotten into Spider-Man and wanted to know everything. A tease of what was happening in TAC like this was so mysterious! Constantly getting little snippets of a now 20+ year history was so fascinating. I wouldn’t see how Felicia got hurt until, well, when I read TAC 76 for the blog. Most of my life passed between seeing this little tease and reading what happened. Kinda crazy. And that wasn’t all. Very next page:

Like, who is this? The Juggernaut? What? I think there’s developed an attitude in comics where stuff like this is off-putting to new readers. That it’s confusing. And maybe it is, even, but to me it was just tantalizing glimpses into a world I wanted to know more about. The radio mentions the break-in at the New Jersey Osborn warehouse, and Spidey knows there’s no way that’s a coincidence. As he leaves, there’s an ambiguous implication that Madame Web had him turn on that radio for a reason, and is maybe not being truthful about her condition, but that’s gonna have to wait. Spidey swings off to try to learn more about what’s going on. Elsewhere, Amy Powell is modeling for Lance Bannon as he tries to get some photos for a gallery show. When he’s done, she spots some unsold Spidey photos and starts ribbing him about Peter Parker beating him to the punch.

Troubled romance! Why would Lance brush off Amy? Is he The Hobgoblin??? Get used to that, because making people look suspicious is going to be a big part of Spidey comics for an astounding four years. As Lance worries he’s afraid of commitment, Spider-Man arrives home, realizing he’s not really stopped going in over 48 hours. He takes a shower and washes his costume. In the process, he considers all he’s learned about the break-ins, and hypothesizes that maybe Osborn left journals behind that that robber he lost last issue or someone else could be using to pull off these robberies. A+! He also worries that his secret identity might be in said journals, if they exist. He thinks he needs to go check out the two safehouses he knows about, but first, he lays down to get some rest. He’s roused from his sleep by a phone call.

Amy’s attempts to make Lance jealous with Peter just go worse and worse. Peter manages to eat a sandwich while getting into his Spidey suit and then he’s off. He tries the first location he knows for a Goblin safehouse (From ASM 39) and finds it already picked clean. So he tries the one from ASM 96, and it is not empty at all.

Such great staging in these pages from Romita, Jr. The cloud of razor bats catches Spidey offguard. This isn’t a trick Norman used. But he gets out of it and dives at Hobby, only for his foe to fly straight up and dodge. Then Hobgoblin tosses a new kind of ghost-shaped gas bomb that drops a heavy smokescreen, but Spidey uses that to his advantage, setting up a counter attack under the cover it provides.

Hobgoblin shoots through the pavement and hits a gas line, sending a torrent of fire up into the air between him and Spidey. Spider-Man, of course, focuses on preventing any further chaos. He crushes the feeder line to the fire won’t have any fuel, but by then, Hobby is gone.

Spider-Man of all people probably shouldn’t ask that question. So, now Hobgoblin’s on a quest for The Green Goblin’s power. But we won’t see him again for a little bit. And with the time jumping around here, we won’t see more of this particular storyline for quite awhile. Hey, what can ya do?

By the time the mystery of The Hobgoblin is resolved, Stern & Romita will be long gone, and nothing they had planned will come to pass. It creates a weird feeling reading it, because you can’t help but play along with the mystery, try to catch all the clues and red herrings, but you also know they’re not going anywhere. Stern knew who Hobgoblin was when he left, but it didn’t wind up being who he wanted, so all bets are off.