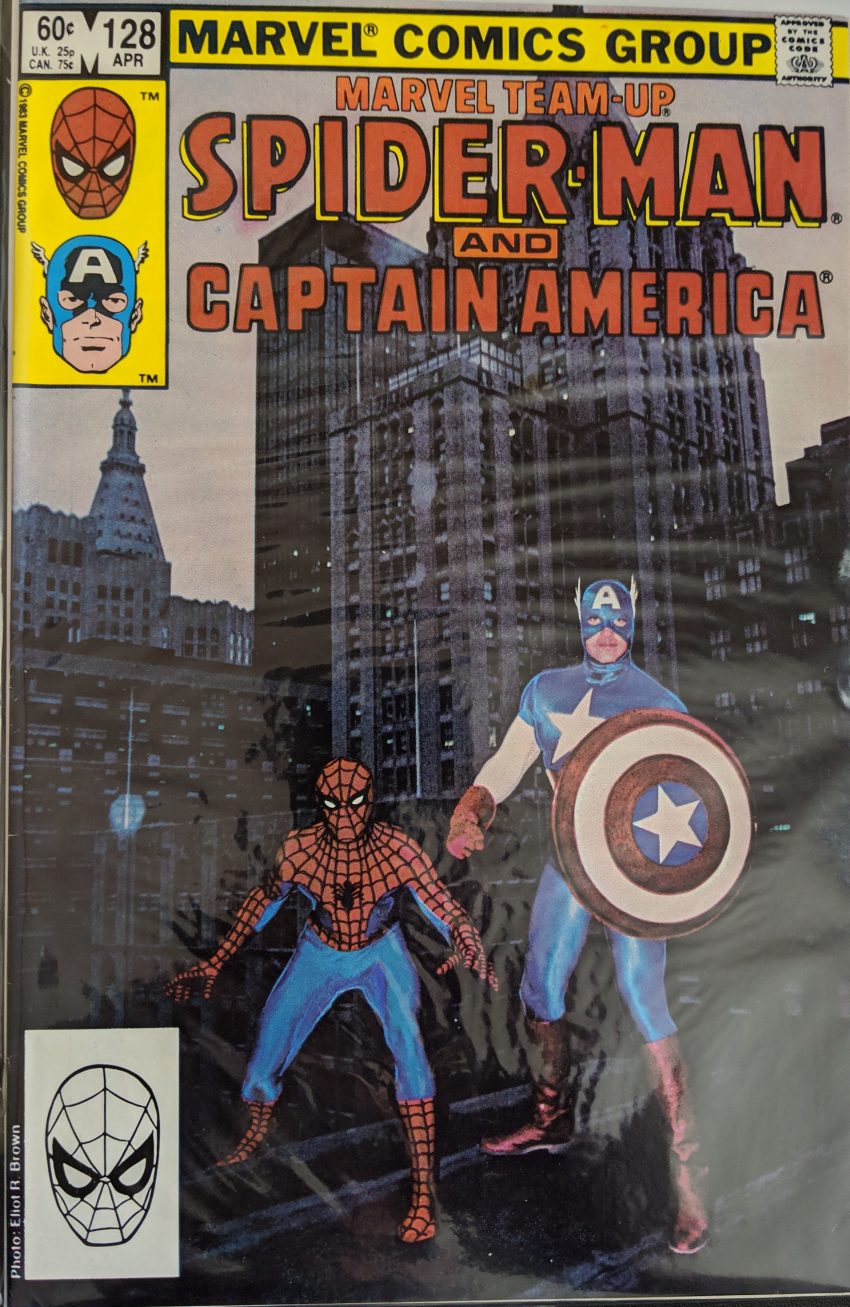 There’s something you don’t see everyday. Wonder why this happened. Same team as usual lately as Peter Parker, his lab partner Roger Hochberg and his girlfriend Mia Carrera are at a street festival. I guess Peter’s personal life is in a rather weird place right now, come to think of it. The ESU supporting cast is all-but gone forever, we haven’t seen Harry Osborn, Flash Thompson or any of the classic people in a long time, and JM DeMatteis has decided Peter’s BFFs with Roger Hochberg, soon to disappear out of the books as mysteriously as he appeared (Until suddenly resurfacing twice in the 90s courtesy of, you guessed it, JM DeMatteis). We know that Flash, Sha Shan, Harry, Liz & MJ are going to be the supporting cast soon from the jumbled nature of this blog, but right now, Peter’s not really hanging out with people. At any rate, Peter is not feeling festive, because Black Cat’s still in bad shape in the hospital and he can’t even talk to anyone about it because, for the first time, Spider-man is dating someone and Peter Parker isn’t. While he mopes about that, straight up ignoring Mia as she tries to talk to him like a weirdo, Steve Rogers and his beloved Bernie Rosenthal are at the same street festival, and Peter recognizes Steve.

Steve is right to be worried. It’s exactly who he thinks it is.

DeMatteis, of course, created Vermin in Cap. Like many comic book writers do, he’s sort of carried his favorite creations with him from job to job. Peter throws his keys at Roger and says he & Mia should go to Peter’s apartment, only a few blocks away, while he stays to get photos for The Bugle. Steve and Bernie, who has recently learned his secret, have a brief argument about whether this is a job for Captain America or the police, but Bernie is ultimately supportive, leading to this gag:

2 speeds. When the heroes arrive on the scene, Vermin sics his gang on them, Cap fighting the 3 dogs while Spider-Man is almost drowning in rats. Cap sees that and gets a firehose, sending them scurrying, and Spidey returns the favor by webbing up all the dogs.

I don’t know her, myself. She, too, was just here to enjoy the festival, as it turns out. Spidey takes the chance to leave as they begin discussing what happened in that Cap story that created Vermin, and they wind up back at her place. I guess Steve has just abandoned Bernie? Then Gail tries to put the moves on him and he leaves, but not before saying he’s attracted to her, just ‘cuz. Cool stuff, Cap! Meanwhile, Peter Parker is arriving home pretty badly beat up when he find Mia sitting in his living room.

Two near-infidelities in two pages! Does it count as 3 if Mia & Peter both have someone? Sheesh! Peter hurries a very confused Mia out the door, saying he needs to rest after getting beat up, then Spider-Man swings away thinking about how he was stupidly about to betray Roger & Felicia and maybe traumatize Mia, cursing himself for being weak. There’s that Parker guilt. He arrives at the convenience store Vermin & his animal gang are rampaging through just as Cap does, having heard the same news bulletin, and they are attacked as soon as they get inside.

Wow, Spidey, just judge the guy right to his face, why don’tcha? “Your life was ruined when you got turned into a monster by a legit Nazi, but if you expect me to feel any empathy for you, well forget it!” Vermins manages to push what we’re told is a 500 pound shelf over on top of Cap, and is about to kill him when Spidey webs his hand.

Well, there you go. A lesson and everything. The rest of the book, to my surprise, is a little essay by Elliot R. Brown on how the front cover came to be. Well, hey, asked & answered! It’s surprisingly long. 6 pages! Most of that space is additional shots from the photoshoot, but still, wow. The photo cover was Spidey editor Tom DeFalco’s idea. Spider-Man was played by John “Squid” Morelli, and Cap is famed comics painter Joe Jusko! That’s pretty fun. Brown goes into extreme detail on the equipment and technique he used, more than us rubes can really appreciate, I would say.

Painter Bob Larkin retouched a print of the final photo and that became the cover image. The additional images from the photoshoot are pretty amusing, but they look like crap reproduced on newsprint in 1983, blurry and hard to appreciate. This one printed the best:

Anyway, that’s pretty fun, and that it’s for this issue. Next time, more with The Hobgoblin.